I am playing a piece for the guitar on the piano and everything sounds fine until I reach the last few notes in the score: all the notes marked with a '19' above the staff and represented with diamonds appear to be in a different key. Anyone knows what's happening here?

Also, what does the p i a m i p m i mean for the notes that are preceding? 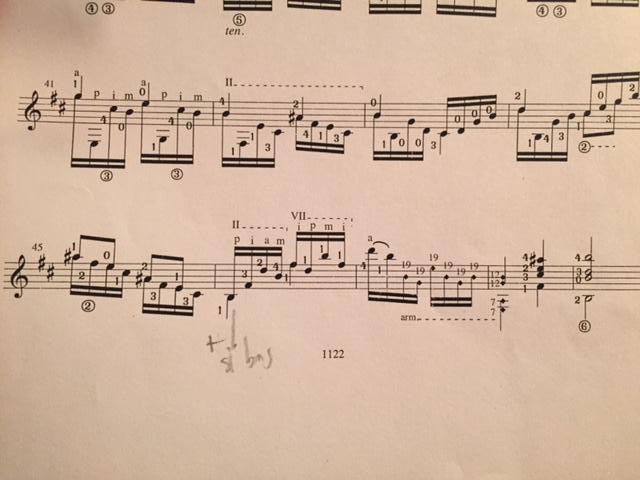 p-i-m-a indicate which finger to pluck with (thumb, index, middle and ring, the letters come from the Spanish names), and thus are guitar specific. Similarly the small numbers to the left of the noteheads indicate which left hand finger to use to fret that note.

The diamond shaped notes are natural harmonics. I believe that the way it is notated here is: the note locations indicate the string (e a d g b e low to high) and the numbers above them indicate the fret at which to make the harmonic. Thus the pitches are

where I've indicated where the sounding note lies in relation to the note indicated by the diamond note head. The harmonic produced at the 19th fret is the same as the one generated at the seventh.

Not the answer you're looking for? Browse other questions tagged guitar notation transposition or ask your own question.

7
What is this cross staff tied/slurred note supposed to be?
1
Is it fair to say the treble clef is optimized for piano?
2
Notation for note decaying slowly
3
Numbers above notes in orchestral score
2
Need Help with Trumpet Lesson and Piano Chords
15
How do I interpret two notes in a tempo marking?
2
GuitarPro Notes Displaying One Octave Too Low
0
Am I notating this 2 layered staccato right?