How do I write notation for multiple voices?

I'm composing in 3/4 time, and I want to write the left hand piano part so that the first note (of 3) is held for the duration of the measure. The second note comes in on the second beat, and the third note on the third beat. Each note when played is held to the end of the measure. How do I notate this?

There are various ways of writing this, some involving tied notes. But basically yes, you need to show a three beat note, a two beat one and a one beat.

Maybe simple quarter notes plus a pedal indication would be appropriate. But I agree, it wouldn't be quite the same effect.

See this question for an example of this using two voicings. Each new voicing should reflect the appropriate amount of rest before it is played. So for your example, the first note played will have no rest preceding it. The second note played will get a quarter rest, and the third note will get a half rest. You should get the idea.

Also, if you are playing in 3/4, the "3" indicates the number of beats per measure while the "4" indicates quarter notes for each beat. A dot after the note means to add another half of whatever the note indicates, so a dotted half note is played for 3 counts, dotted quarter note will be played for 1.5 counts.

Bach does something very similar in his Prelude in C major, though it's five parts across two staffs. You can see that he writes the first note out full length, the second note with a rest, and then tied for the full length, and the remaining notes with rests followed by their individual durations. It's also believed that, in practice, this probably should be performed with all of the right hand notes held as long as possible, despite their being notated as 16th notes. 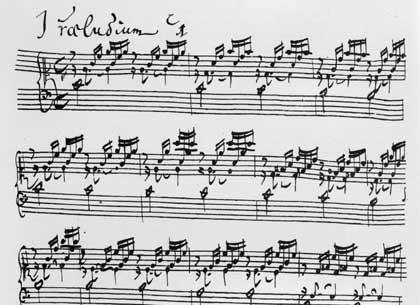 This is actually something that you see in a lot of piano music, where the left hand has an arpeggio of three or more notes: the first note will be written for the full duration, and the remaining notes of the arpeggio are often just written with the duration until the next note of the series (for example, you might see a whole note with a quarter rest, followed by a series of quarter notes). Sometimes this will be marked with a sustain pedal marking, and it is often implied, even if not notated. The first note would have it's stem go one way, and the remaining notes would have their stems going the other way.

Now, if you insist on writing three parts to a staff, with complex rhythmic independence between the parts, you're bound to get a mess. Bach did this in his manuscript for the Ricercar a 6 in his Musical Offering:

If you really mean for the score to show three voices, you would use rests for each voice when it is silent like in this 4 voice fugue...

You didn't say what the pitches are, but as they will overlap I assumed you were working with chord tones. It could be like this...

32
Rest above a note in a piano piece
8
How to write down a note that is sustained while there are other simultaneous pitches in the same bar?

8
How to write down a note that is sustained while there are other simultaneous pitches in the same bar?
3
Notation: how to write resonances?
4
Adding a Time Signature to a composition
1
Drum set notation
7
What's the name for when you write multiple voices on same staff? And are there any cons?
6
Notation: grace note played on the beat with a chord
2
What is notation for holding a note full value?
11
Notation for depressing piano keys without sounding them
4
What's the proper notation for holding one note of a chord while playing the other notes staccato?
4
How to beam multiple voices correctly