What is the Hanson system used for?

Recently I've been learning about alternate analysis techniques used for modern compositions and one that I've recently learned about the Hanson system partiality described below: 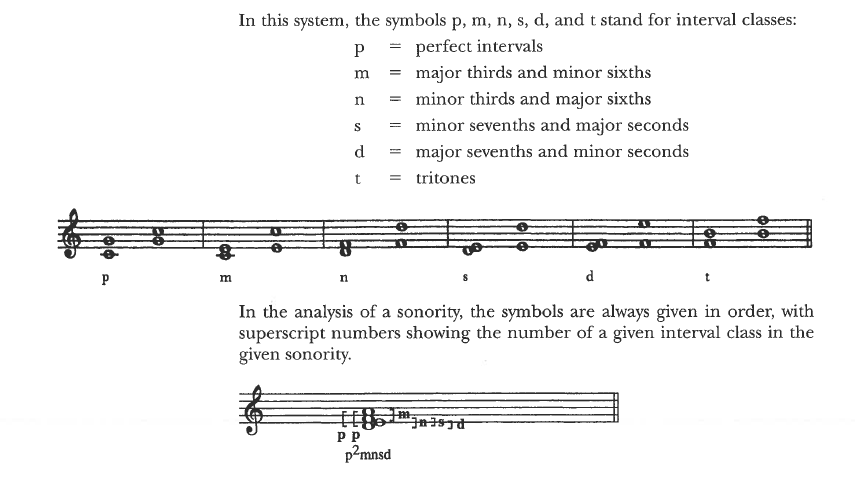 Now as shown in the example above a Dmadd9 gets reduced to a p2mnsd because of the intervals between the notes.

What I don't understand is how this analysis is used to give meaning to groups of notes since it seems that different groups can result in the same analysis. For example, wouldn't a C, E, F and C, G, A♭ yield the same analysis? So how can one efficiently use this system? Are there times when this type of analysis is more appropriate then others?

The fact that this method will yield the same results for some sonorities is a feature, not a bug! This is an analytical notation rather than a performance notation, and as such, part of its purpose is to find similarities and identities between sonorities that are different on the surface. This particular p2mnsd harmony is, as you say, a Dmadd2, but there are many other harmonies, which, though different, have fundamental similarities. Most obviously, for example, Fmadd2 is an extremely similar harmony that would also be called p2mnsd. This is something everyone does with more familiar harmonies—we acknowledge that C Major chords and F# Major chords are, in some sense, fundamentally the same kind of harmony when we say they are both Major chords despite the fact that they share no actual pitch classes.

However, Hanson's approach will also point out similarities beyond these more obvious comparisons. For example, if you turn that Dmadd2 chord upside-down—that is to say, if you, for example, were to build a M2, m3 and P5 below D instead of above it—you would have an Gadd4 harmony. This too is a p2mnsd, despite the fact that is has a somewhat different sound. A method such as Hanson's points out that there are still some underlying similarities between these seemingly different harmonies.

Hanson's method will also eliminate functional distinctions based on enharmonic spellings. Both an Ab7 chord and a German Augmented Sixth chord in C minor will have the same pitch classes, but in common practice tonality they will function very differently. But we already have a theoretical apparatus to deal with those distinctions; Hanson is interested in being able to find new potential relationships irrespective of pre-existing grammars or even whether they are familiar triadic harmonies at all.

It's important to note that Hanson's descriptive apparatus is essentially identical to interval class vectors in set theory, and has been effectively superseded by it. p2mnsd is the same thing as the interval vector <111120>; they impart the same information but the interval vector will be recognizable to far more people. I also think it's a little clearer about the fact that there are no tritones in the harmony since there's a zero for any unrepresented interval classes. In Hanson's notation you have to notice there aren't any t's.

Finally, there are a few harmonies that Hanson's method will show as being identical that aren't transpositions or inversions of each other. For example, the notes C, Db, E, and F# would be pmnsdt in his notation, and so would C, Db, Eb, and G. However, try as you might, you will never be able to transpose or invert the first set of notes and generate the second set. In traditional set theory, the interval class vectors for these two sets are (of course) also identical: <111111>. However, the first set is (0146) while the second is (0137). Forte called these sets that are different but share the same interval content "z-related sets" (I believe "z" stands for "zygotic").

With either notation though, it's clear in this example why such analytical methods can be useful. pmnsdt and <111111> both make it clear that these are particularly interesting sets because, despite the fact that they only have four notes, they have every possible interval contained within in them. They are sometimes called "all-interval tetrachords," and both analytical notations give you a sense of their general soundworld as well as their compositional possibilities. The diatonic set (C,D,E,F,G,A,B) would be labelled p6m3n4s5d2t or <254361>, both of which beautifully illustrate the diversity and asymmetry of the set as well as the abundance or dearth of common tones at various different transpositional levels. It's especially instructive in contrast to the whole-tone scale collection which is highly symmetric and starkly either/or: m6s6t3 or <060603>

The Hanson system appears to be a means of efficiently expressing an interval-class vector chart commonly used in Set Theory analysis.

An interval-class vector chart shows all of the possible interval classes for a given set. As is the case with set theory, analysis has little to do which how the notes are spelled or which notes are used, but rather the space between the notes.

Normally, this chart is confined to a couple of rows with boxes. The notation system you describe, seems to be a way of taking the analysis out of the boxes and putting them in the composition.

That being said, I have never heard of this system before, so it has likely not caught-on in the theory world because it is by-and-large impractical for functional analysis. No-one needs to have mobile interval-class vector charts because we already use sets. Besides, using using such charts is only helpful if the composer originally used those charts to compose the piece.

Not the answer you're looking for? Browse other questions tagged theory analysis or ask your own question.

14
The theory behind western pentatonic scales

5
How do time signatures relay information on the grouping of beats?
12
History of "jazz minor/melodic minor" harmony
0
Key/Chord recognition using a computer
12
Recognizing modulation style / pattern in Steely Dan's "West of Hollywood"
13
What is the correct process for deriving the 'mirror' or 'negative' harmony of a progression?
3
Half-diminished pentatonic scale?
2
Is a Major Interval the same as a Pure Interval?
1
Why do we care about the interval between a pair of notes and not the product of a pair of notes?
4
Should sensible analysis show secondary functions fulfilling the supposed function?
6
Do accidentals in a figured bass last the full measure, or do they only apply to that single chord?