What harmonic spectrum is produced by oscillator sync?

I can find a ton of information on the harmonic structure produced by FM synthesis, but what about oscillator sync? how is the resultant sound related to the waveform of the audible (slave) oscillator and the frequency of the oscillator it's synched to? can you get enharmonic partials from oscillator sync?

I would love to use MathJax to provide the mathematical formula that answers the above question, but it appears not to be implemented for this music-related board, only the maths-related boards. Here is the equation:

You can read the full paper here.

The spectral effect of hard sync is incredibly varied and not as systematic as AM or FM. However, it is definitely capable of producing inharmonic spectra. Here's an excellent article explaining how hard sync can make synthesis of an acoustic piano more realistic by creating inharmonic sounds reminiscent of the striking of the string by the hammer and such: http://www.soundonsound.com/sos/Nov02/articles/synthsecrets1102.asp

There are, as you know, two waves involved in a sync situation: a slave waveform, often a sawtooth wave, and a master waveform, generally a square or pulse wave. The master waveform determines the frequency of the resultant sound, because it forces the slave waveform to reset to its beginning every time it (the master) completes a cycle. If the master is faster than the slave frequency, this tends to not be spectrally interesting, because it just changes the frequency and amplitude of the slave without changing its timbre. However, when the master has a lower frequency—and isn't an even multiple—of the slave, striking timbal effects are possible. The slave makes it through one or more of its own cycles plus a fraction of another cycle, generating a unique and timbrally-complex resultant waveform. Bottom line, changing the master frequency changes the frequency of the result; changing the slave frequency changes the timbre of the result. 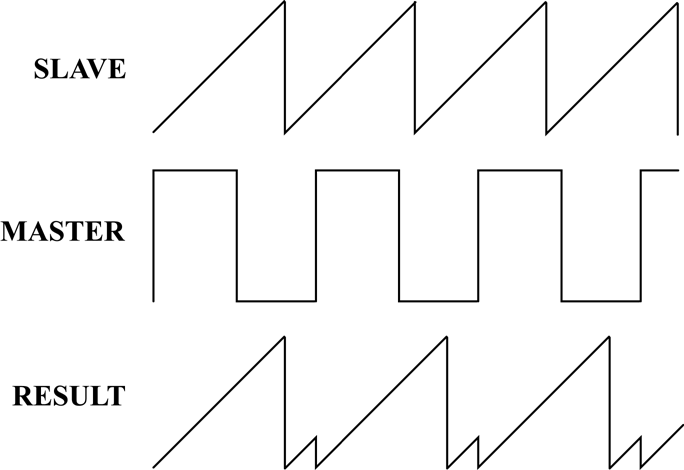 Not the answer you're looking for? Browse other questions tagged harmonics synthesis or ask your own question.

13
How does the harmonic series affect consonance?
1
Compare FM synthesis sound signal to equivalent additive synthesis signal
3
What is virtual pitch?
6
How do I figure out the fundamental frequency of a sound from its frequency spectrum?
4
What determines the relative volumes of the harmonics when plucking a guitar string?
42
Why doesn't my synthesized note sound natural?
3
Sending Frequency into a Pitch Input
1
Is a frequency modulated (in an FM synth) signal perceived by our ears in the same way as two signals played at the same time?
5
Can you change some composition I wrote to whatever music you want just by changing the timbre of the instruments?
4
Shift Phase of LFO Wave