What are the differences for left handed person when playing electric cello?

If I decide to buy an electric cello, should I look for a special one for left handed people, or I will even have to order a custom one?

Short answer: for an electric cello, there is no basic difficulty in playing left-handed apart from the bridge and the nut, if you have already learned the cello left-handed.

Most electric cellos feature a wood bridge, and its arc shape and groves correspond to the fingerboard's shape and string gauges. The main custom thing you will need is the bridge but you might need a custom nut as well (depends on models). Any good luthier can fit you a new left-handed bridge for a reasonable fee. He or she might even like the challenge of doing something unusual. If your electric cello vendor can make it for you on order, its probably a good solution too, because he will know a few things about interaction with the amplification system. Having the right-handed bridge could be helpful if you want to sell it later.

Orchestral string instruments such as violin, viola, cello, double bass are not symmetrical but this fundamental asymmetry is not seen at first glance and is mainly concerned with the acoustic properties of the cello body which are almost irrelevant for an electric cello. I expand on this subject because at least one answer to this question is really misleading.

Inside the cello, you have a soundpost on the right side blocked between the table and the back, and a so called bass bar (image taken from http://www.nowakviolins.co.uk/) glued on the table. These two devices are essential to enhance the resonance and amplification of the string vibrations by the cello body. 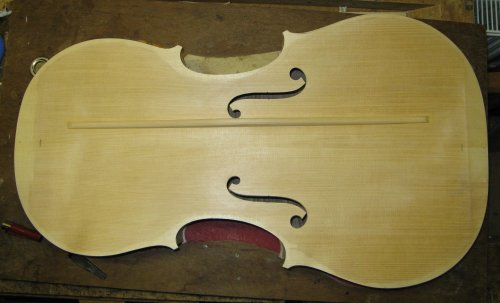 So true left-handed cellos are different in many respects, and this is not only a matter of changing the string order. They are rarer than ordinary right-handed cellos but I do not like this terminology, because string playing requires as much ability and coordination from the two hands, and it is not always clear that a left-handed person might benefit in using its right hand for the fingerboard. Anyway this is clearly a problem when playing in orchestra to play with the bow in the left-hand.

Not the answer you're looking for? Browse other questions tagged construction lutherie cello or ask your own question.

17
What are some qualities to consider when purchasing a cello?
8
Playing cello, should my left hand thumb clamps the neck like pliers do?
2
What type of microphone is suitable for cello together with a looper pedal?
1
What are common scale patterns for the cello?
7
What is the safest way to set down a cello?
6
What are some technical considerations for transition from violin to cello
24
Are very cheap cellos acceptable for a beginner?
1
Should I learn the violin first before I learn the cello?
4
How do I progress without a cello teacher during COVID lockdowns?