How do you draw a quarter rest with a pen/pencil?

It seems to me that the quarter rest we see everywhere was drawn with a calligraphy pen. I don't have one of those - I have a sharpened/mechanical pencil or a ball-point pen. So usually when I try to imitate the shape of a quarter rest, it looks a lot like a 3.

What is a proper/accepted "thin" version of the quarter rest symbol?

To draw the quarter rest, draw the right side of a letter “R”, omitting the vertical, or start with a number “2”, but pull the horizontal line down on the right. Put the hook on the bottom and it’s done. The quarter rest is a letter “R” suitable for being placed next to a letter with a vertical right side. It’s right out of Gutenberg’s Bible. The hook on the bottom is merely embellishment.

The “classical” quarter rest is a mirror-reversed 8th rest. Don’t use it.

Some people draw a version of the “S” rest which was introduced in the very early 1800’s to replace the “classical” rest. The “S” rest is like an S or backwards “Z” with the top and bottom concave instead of convex or straight. Another way to draw it is to make a line down and curving left, straight to the right, and then curving left and down. That is the easiest way to start, and I recommend it to you. If you rotate that clockwise you have an “S” rest. Or copy the eighth doubled and backwards. Or chop away half of both curves of a Gutenberg rest.

There is a lot of variation to be found in the quarter rest. The problem with the Gutenberg rest is that it takes too much vertical space and therefore collides with other rests or notes too often. For handwriting music, the Gutenberg rest and the classical rest are the worst, in my opinion.

I was taught to use a lower case z with a lower case c under it, with the bottom of the z touching the top of the c.

I draw a quarter note using two pen strokes. In the picture below I've used a narrow ballpoint pen. If you use a slightly fatter pen the 2-3 and 4-5 lines will touch, creating the impression that the character was drawn with an italic pen. The change in width is a valuable visual clue and makes it look much more like a printed quarter note rest. This is easy to write and looks better than a quarter note drawn with a single pen stroke. Also, its appearance is more familiar and easier to read than the reverse eighth note rest suggested elsewhere. 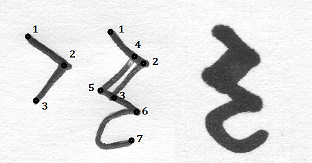 I was always taught to write a slanted 2 and then make a c below it.

In Britain we would simply draw a lower case z in the middle of the stave, and this is considered legible. It's what we teach children, too.

13
What is the device used to draw 5-line staff (empty) with a pencil/pen?
22
Origin of the 'squigly line' used for quarter note rest?
3
Should two quarter rests always be written as half rest?
6
Difference between half note and quarternote with quarter rest
3
How to draw in a staff a chord containing C and C#
3
Dotted quarter rest vs. eighth note rest + quarter rest
5
Key signatures with Quarter Tones
4
Percussion duration notation issue
10
Can you use a dotted semibreve rest in 3/2 time?