What notes to sing with chords

Should I sing the C note for C chord and D note for D chord and A note for Am and F note for F chord ?

Or how does it work?

Thank you for your answers

Not being completely sure what you are asking - I will answer the question as if you are writing a melody for a song based on a pre-determined chord progression.

If you were to approach writing a melody by first defining a chord progression, you would probably want to start with chords that fit within the key you decide your song should be in.

So let's pretend we are going to write a chord progression in the key of C. So we choose chords from the key of C and let's say we decide our progression will be C / F / Dm / G and it repeats. Since chords and chord changes define our rhythm, we need to decide how many beats each chord gets and where the chord changes fall.

Let's keep it simple and say each chord in our progression will be played for one bar or 4 beats (4/4) time and the chord changes will occur on beat one of each new measure.

So now we need some melody notes to go with the chords. Within each measure (or bar) we will have a certain number of notes depending on how fast we want our melody to go. So we could have 4 quarter notes in a measure or 8 eighth notes or 16 sixteenth notes or any combination depending on how we want the melody to flow.

So if we choose six notes per measure then we must decide which six notes we might use. Let's start with the C chord in the first measure. The easiest notes that we can be sure will work - will be the notes in the C major triad or C,E and G. As a general rule, the first note of the measure that begins with a C chord should be one of the 3 notes in the C major chord meaning either C or E or G. It can be an octave or more higher or lower than the notes played on your guitar.

If you have six notes total, at least three of the six notes should be one of the three notes found in the C chord (can be octave or more higher or lower as long as it's a C or E or G). In any given measure, try to choose most of the notes (at least every other note) from the notes found in whatever chord you are playing for the duration of that run of notes. It won't sound good if you play a measure strumming the C chord and only one of the melody notes are within the chord. The more the better but at least half as a guideline.

Our options for notes other than the C, E or G are any note in the C major scale (key of C major). This applies only to the tonic chord or the chord that is the same as the key we are playing in.

For our next measure using the F chord, our notes are more limited. The same principle will apply for using one of the 3 notes in the F major triad (chord) as our first note in this measure. That gives us a choice of **F, A and C.** The same guideline applies to make most of the notes in that measure either an F, A or C (any octave).

The same logic will apply to the other chord sequences. Again, first note played after the chord change should be one of the notes that form the chord. If it's a four note chord (7th, augmented, etc.) you can use any of the four notes and often the note that makes it something other than a triad will be suggested strongly as a melody note or two while playing that chord. If you must use a formula, a safe bet is to choose the notes that are common to the chord being played AND the key of the song. In other words choose from the list of notes that are common to both of these two scales. There are exceptions that will work in some circumstances, but this will keep you in safe territory.

You don't really need to chart out all the notes of all the scales of all the chords if you are composing a melody to go with a chord progression though. If you try to choose most of the notes that are to be played or sung over a certain chord - from the notes that form that chord, your ear will lead you to the other notes that will fit with that chord. If you pick a wrong note while sounding that chord - it will sound sour or wrong.

So the simplest way to compose a melody over chords is to use the notes in the chord itself (octave or more in either direction is okay) as a basic framework for the notes that fit with that chord, and the rest of the notes will fit naturally within that framework and you will hear what works without having to compare scales and match notes. Let your ear be the guide for any notes that are not a part of the chord.

As you can see, you have more than one note that will work with any chord. Feel free to experiment and just see what sounds good. Hope this helps.

To put it simply, in a song, there's melody and there's chords. They do have some relation (certain notes do not sound good with certain chords, to various degrees) but they are two separate things.

In order to play the guitar you should know the chords (you already have that), in order to sing the melody you should find the notes sequence that consist it. That can be done my ear, or by reading a music score, like this example below. See that C in a square? That's the chord. The notes are the melody. 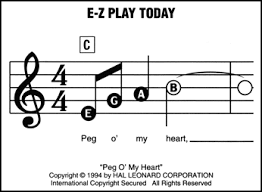 If you already have the song, the notes are already there to be sung. If you only sang a C note with a C chord etc, it would be a poor song. A C chord will work with several notes from the C scale. The best are C, E and G, as they actually make up that chord. Depending where in the bar you sing other notes over it, others may or may not fit. Your ear will tell you better than a written explanation.

The chords you show are not diatonic- they don't all come from the C key. The D is foreign.

To get an idea as to which chord fits in a bar, look at the main notes - often the 1st and 3rd beats. If they belong to one particular chord, then that will fit well. Maybe it's not the only one, though, it could depend on what chords are before and after that.

This is a simplified answer at the moment. If you actually meant 'when I sing a C note do I play a C chord,' etc., then the basic answer is NO. The C note will fit with several other chords that may make the song sound much better.

You can, and there's nothing wrong with that. It's the simplest way to harmonize your melody (notes sung) to the underlying chords.

The next simplest way, and one that is pretty much guaranteed to not produce any dissonance, is to sing a note from the chord you're playing over. For the C chord, then, that would be C, E, or G.

Beyond that, it's up to you.

If you Can Sing it shouldn't be a problem your voice doesn't have to be the same notes that's almost impossible. I say just stay in your vocal range. I practice the song without playing with headsets on and record so I know were I need to work before I play it and practice like he'll before we go on stage.

Not the answer you're looking for? Browse other questions tagged voice composition melody songwriting or ask your own question.

15
How can I learn to play the chords by listening to the song (like I do with notes)?
7
How to make a song with chords and scales?
2
Simple chord progression question
1
When writing a melody, is the scale used determined by the current chord playing (in the chord progression) or by the song's key as a whole?
2
How to begin putting chords on variable melody?
1
how to find right chords for a riff
0
Changing a song's key vs. changing chord voicings
1
How to find what chord harmonizes with a given note in a given context?

32
What is the relationship between the melody line and the rhythm chords?
5
What is the relationship between notes sung and chords played?
19
Why can I sing in key?
7
How to make a song with chords and scales?
15
The Chords in this progression sound great but don't belong together - so why do they work?
2
Do melody notes over chords basically change the underlying harmony and the chord extension?
4
Singing along to guitar chords (harmony)
1
Notes between chords
13
Does the starting note for a song have to be the starting note of its scale?