Teaching yourself piano as a support instrument only?

What is the best way to learn piano if I only want to use it to support my singing, and to aid in transcription and composition?

All self-teaching courses I've come across seem to focus on self-sufficient piano music. I can afford a teacher, but I'm a bit wary of that as I'm actively studying singing and do not want to lose focus.

I also feel that I should be able to learn the basics that I need on my own at my own pace. I play guitar and have a basic understanding of musical theory and harmony. I do not sight-read polyphony well though.

I would appreciate any pointers, be it multimedia materials, books, youtube videos or general advice.

I am right there with you. I also play guitar and sing and write songs. Lately I have been trying to play more piano but don't want to devote the time to take lessons. If you follow the method detailed below, you will be accompanying your singing on piano in a surprisingly short period of time.

Then one day you found a song that had the three chords you had memorized and mastered but also had an Am (or perhaps it was Em) chord in it. So you learned to play a new chord. Now there were even more songs you could play! Then you learned an F and could play songs in the key of C.

Guess what? You can play all the same chords on piano that you play on guitar. And guess what else? You don't have to make your fingers and wrist and hand curl into strange contortions to play them.

Go about learning piano chords the same way you learned guitar chords, one at a time. You will find the learning curve is easier because you don't have to master the contorted fingerings so much as just memorizing the shapes and positions. Practice the common chord changes (like on guitar) until they are smooth and you can do them without hesitating.

Learn to play the right hand chords together with the root note of the chord with the left hand (same way you play guitar by using both right and left hand). You won't always play them simultaneously - but learn to position your left hand over the root note so you can mix the left and right hands together as the rhythm dictates.

Every now and then I get fancy and throw in another chord note on the left hand with my middle finger. But that will come with time if you just focus on positioning your left hand in concert with whatever chord you are playing with the right hand.

You can download and print free piano chord charts from the internet. Print out the ones you need and put them on your piano's music stand and practice playing them. Apply them to a 3 chord song you want to learn. Once you learn that song, you will have those three chords in memory and you can build from there.

After you master most of the basic chords you can practice adding embellishments by playing the chord notes individually or throwing in some other filler notes like you do on guitar. This is actually easier than picking individual strings on the guitar while playing a chord. For major triads - try playing the octave of the root and alternate between inversions depending on what sounds good in your song.

Learning chords on the piano may come easier than on guitar because many of the hand positions are similar from one chord to another. For example - you can use the exact same shape to play a C or an F or a G chord just move the shape around like barre chords on guitar. And with a digital piano that allows you to digitally transpose from one key to any other key, you could just learn the chords for the key of C (as an example) and use those same chord shapes and positions to play in any other key by using the transpose feature.

I like to call this a chord based method of learning piano to accompany singing. You won't be playing classical pieces by famous composers but you can certainly accomplish what you stated in your question. And you won't need to read standard notation or sight-read polyphony. All you need to know are the chords - just like on guitar. And you will learn to improvise from there.

I have included some pictures below that I found on-line to show some examples of the type chord charts you can expect to find including an example of an inversion chart to use once you master the basic chords. There are plenty of different type charts available. Choose the ones easiest for you to read and relate to.

You will be playing piano and singing along to your favorite songs in no time at all. 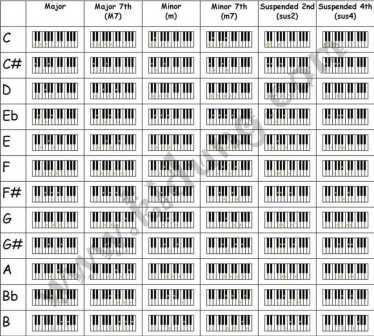 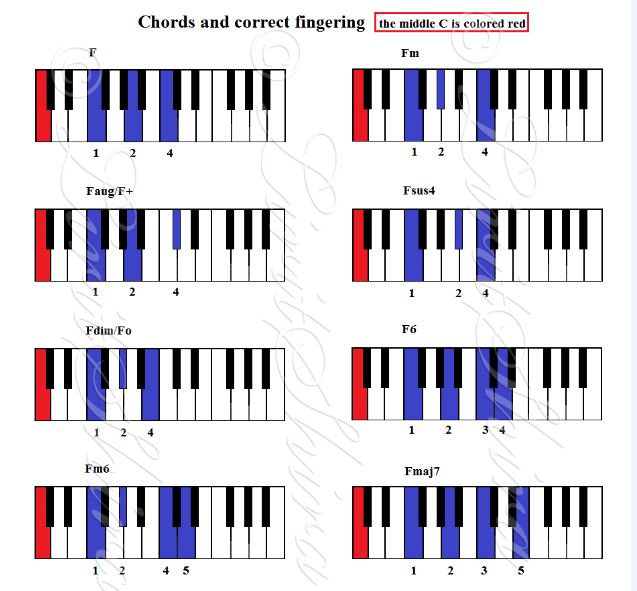 The image below is an example of the type of info you might find online to show how to play inversions. The example below is for a C Major chord. 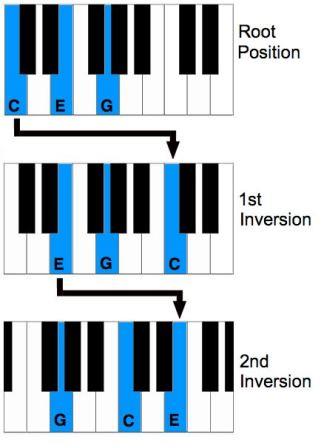 Learn the relationship between chords and chord names and arpeggios (broken chords ). You can play the root note with your left hand and the block chords or broken chords with your right. Get them dancing in time, and you can sing along.

Start with simple tunes, major triads only. Then begin to branch out to minors and chords with accidentals.

The simplest finger dance is a boom-chuck. It consists of alternating the root and the chord in 4/4 time. In waltz time it is a boom-chuck-chuck. In both cases the boom is the bass note on the left hand, and the chuck is the block chord on the right.

Soon you can move to more sophisticated rhythms, move the bass around, and even introduce short melodic phrases with your right hand.

So find a lead sheet or even just a lyric and chord sheet for a tune with no more than three chords and give it a try. This is the most rudimentary way to turn your piano into an 88 string guitar. But be warned, this is a gateway drug, and soon you will crave more sophisticated piano skills. That is how it started with me. Now I am playing Thelonius Monk and playing almost as much as I sing at the piano. Who knew?

First, you could just play along with any sheet music you are singing from. You can use Google to find middle C on the piano and also which keys are for which notes, if you don't already know that (you probably do already know that). From there, you don't need to sight read really fast to be able to pick out notes from your existing vocal sheet music.

Just like with voice, it's maybe 10% theory (at most) and at least 90% practice. Pick a hand (left or right) and start playing along with your sheet music. Repeatedly play through any sheet music you have with one hand only until you have it at least partially memorized. Then try playing while you sing. If you want to learn both hands for a piece, it's very common to memorize one hand, then the other, then practice them together.

If the vocal music you have isn't helping the piano side enough, there are plenty of courses available in the form of sheet music. Personally, I like the Suzuki method, at least to get started on an instrument. There's a lot it leaves out, but the books are affordable and have a nice progression of difficulty.

If you want to get more serious on piano and play more complicated pieces, you should strongly consider a teacher and definitely pay attention to technique. Poor technique can lead to repetitive motion injuries, just like poor singing technique can be bad for your voice. You can probably find YouTube videos that will give you a good start on technique, but as you progress having a professional evaluate your technique becomes more necessary.

I think learning the piano is a great addition to any musician's skill set, and it can be really fun.

In regard to the question about using the keyboard transpose button... I don't think there is a right or wrong approach. A true pianist would find this likely far more difficult and a music teacher I know physically cannot use it because her near-perfect pitch means all the keys are making the wrong notes :)

If you need to be able to play on a real piano, then relying on the ability to transpose everything to a 'nice' key will of course be limiting. But if you only want to play on a keyboard, as a way to accompany yourself, etc, then being good at piano isn't your real goal here.

And there is a fundamental difference between being a pianist and a keyboard player.

I think it's always best to have a teacher. You should be able to find a piano teacher who understands what your goal is, and can still assist you in learning fingerings, scales, and enough to fill in the little motifs that you probably want in addition to simple blocked chords.

I would like to add some points for practical piano playing, these are from a book called Keyboard Accompaniment and Improvisation - a Handbook for Practical Piano Skills.

First, when talking about accompanying piano skills, we must remember, that accompanying with piano is a totally different skill than playing songs with piano (classical or pop). Accompanying is like playing the role of a complete rock band with just two hands. This means, that you need to have a low bass (like a bass drum and bass line) in your left hand and a rhythm pattern with chords in your right hand. This gives you already many possibilities to create all basic piano accompaniment patterns, like pop/rock, swing, Latin and so on.

When using the chords, remember the voice leading rules. The chords need to go to the nearest next chord in order to sound smooth. Avoid using triads in root position, always think how to connect the chords.

Usually, there are not so many chords in a song, so that it is quite easy to figure out how to connect them. Then you might need to listen to the original recording to get ideas for the accompaniment patterns.

Not the answer you're looking for? Browse other questions tagged piano beginner or ask your own question.

1
Would piano or accordion be easier for me as a guitarist?

12
What are the pros and cons of the Suzuki method of the piano teaching vs. traditional piano teaching methods?
2
How useful are learning aids in teaching oneself piano?
4
Teaching using the Piano Adventures series
1
Complete beginner question: Jazz guitar
1
Where can I find a composition teacher?
0
How do you find the tempo of a song with piano as only instrument?
3
Teaching proper piano posture
6
Learning piano the autodidact approach