Ask Question
Asked 5 years, 4 months ago
Active 2 years, 7 months ago
Viewed 1k times
0
This question already has answers here:
What exactly does a 3 mean over a quarter note and an 8th note? (3 answers)
Closed 2 years ago.

I have extracted the measure in question that I'm struggling to understand how the notes line up to the existing (4 4) time signature. 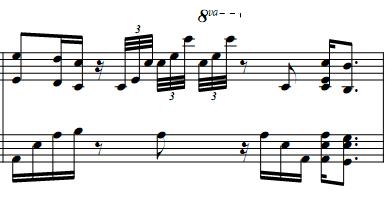 I'm sure there is a musical term for this that would help point me in the right direction.

You have guessed correctly. The correct musical term for groups of three notes with a three on top is called a Triplet And such irregular type of rhythmic notation is called a tuplet.

So basically, In order to match the timing of two notes, the three notes must be reduced from their original time value. as in three 32nd notes will have 2/3rd of their actual rhythmic value. So 3*2/3=2. So by playing each 32nd note slightly shorter than their actual value you must ensure that the total time taken for that group of three notes is equivalent to a 16th note (or two 32nd notes). So the counting can be simply how you'd count a 16th note mentally and filling in the beat with three quick *ta-ta-ta'*s

Not the answer you're looking for? Browse other questions tagged piano notation rhythm time-signatures tuplet or ask your own question.

8
Debussy: Reflets dans l'eau: Rhythm Ambiguity
8
Triplets don't seem to add up
1
Counting a 16th note rhythm with breaks
3
Confusing rhythms/tuplets in Le Sacre du Printemps?
7
Alternative or more advanced methods for counting rhythms
3
When to use tied notes vs. an unconnected “laissez vibrer” (l.v.) tie?
0
How to read and count this rhythm ?
1
How to rewrite this rhythm from common time to 12/8 time?
2
Recording rhythm pauses that throw off the count
1
How do I read this piano sheet music?