Is there a name for this phenomenon in the circle of fifths?

I've recently come across some interesting properties of the circle of fifths in relation to diatonic modes. I'm wondering whether this has been noted elsewhere and if so, in what capacity? A name to Google would help. So far, I've found nothing.

The general idea is that tritone can move chromatically and imply a modal shift in fifths. Each diatonic mode has one tritone in it and it's position relative to the root can be considered distinctive of that mode as no two modes share the same tritone position. Let's consider an exercise. Say a tritone is imperfect and needs to be either widened to a perfect fifth or narrowed to a perfect fourth. We'll start with a series of narrowings using D Dorian as a starting point. I chose it for its symmetry, but it's really arbitrary. It will work regardless.

D Dorian's tritone is from F to B, the minor third to the major sixth. We'll flatten the B to a Bb, making the interval a perfect fourth. Well now the the interval from E to Bb is a tritone. We flatten the E to Eb. Note that we don't further flatten the Bb. We're operating with fourths, so we must use the inversion spelled as an augmented fourth, not a diminished fifth. We'll continue this process. We have the mode, the major scale it is derived from, and the note that was just flattened from the last mode:

We can do the same for sharpening diminished fifths into perfect fifths:

Edit: I'm specifically asking about a mode's tritone moving chromatically as the modes move through the circle of fifths.

I want to point out a few things:

First of all, as others have mentioned, the tritone is symmetric. What this means is that if you take a tritone, and transpose it up or down by a tritone (6 half steps) the result is the same as the interval that you started with (assuming enharmonic equivalence). As a result of the above, moving a tritone up or down by 1 half step results in an interval that is equivalent to the one you would get by moving it up by 5 or 7 half steps (respectively) -- which, of course, are the intervals of a fourth or a fifth. Due to these properties, it's really no surprise that moving a tritone by a half step harmonizes with a scale a fourth or a fifth away. And of course that scale can also be considered a different mode of the scale you're currently in. I don't think there's any specific name for this beyond it being a specific voice leading option for a circle of fifths progression. Changing through modes like that isn't really that common (possible counterexample: modal jazz, where each chord gets its own mode, but this is a special case of chord progressions).

I'm going to take exception with your statement that a tritone uniquely determines a mode. Assuming your root is C, consider the interval C-F♯. This looks like C Lydian (C, D, E, F♯, G). But, using enharmonic equivalence (which we already had to assume), this interval could also be written as C-G♭, which indicates C Locrian (C, D♭, E♭, F♭, G♭). What I would instead say, is that a given tritone uniquely determines two distinct major scales a tritone apart (e.g. C-F♯/G♭ can indicate either G or D♭). There are only 6 possible tritones (after enharmonic equivalence), and each gives you two keys, thus all 12 major scales. For any given root, 7 of these scales will contain the root, and can be seen as a mode based off that note. Since there are 6 tritones, and 7 modes, the tritone that contains the root gets to have two possible modes. BTW, this dual nature of tritones is the basis for the tritone substitution (i.e., replacing V7 with ♭II7, since they share the same tritone).

While switching between modes isn't all that common, switching between chords is. The practice of voice leading is all about creating smooth chord progressions with a minimum of voice movement, and chord progressions by a fourth or a fifth are one of the most common progressions, so of course this type of chromatic motion has been used quite extensively. Others have mentioned jazz and blues, which both use it, but I wanted to point out that even as early as Bach, this type of progression was already known. I was just listening to the St. John Passion, and about 40 seconds into the opening movement (in the linked video) he has a chord progression of ascending fourths in the bass, accompanied by a chromatically descending tritone in the wind parts. This type of progression would not normally be acceptable in Baroque music, because of the leading tone's need to resolve upward to a consonance rather than downwards to a dissonant minor seventh. Bach manages to work around this limitation by having the leading tone of the tritone drop by a half step before the bass moves (thus removing the leading tone, and it's need to resolve upward), and then holding that note into the next bar, creating a suspended seventh. It makes sense that Bach would want to use a descending chromatic scale here, since, in the Baroque era, that was a musical symbol of death, and this is a Passion (a musical representation of Christ's death). 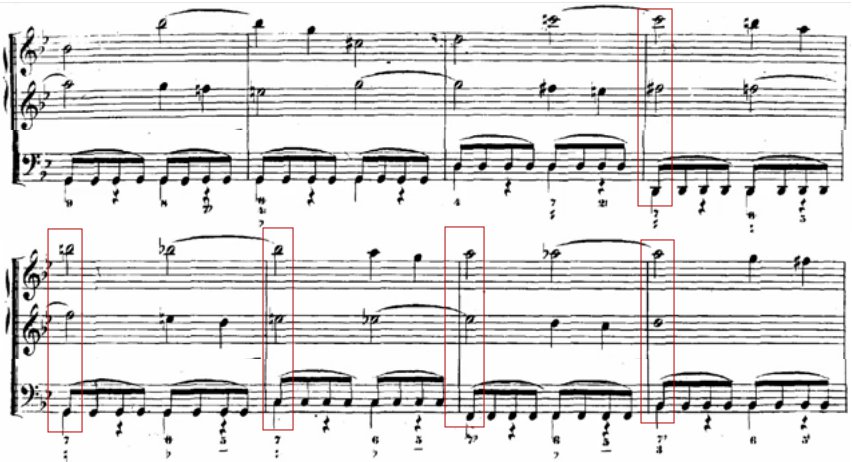 I actually use this as an exercise for students who learn modes. Choose a root and play the locrian mode, then add a sharp and play phrygian with the same root. Keep adding sharps at the appropriate places until you've reached lydian (still with the same root). Question: what happens if you add one more sharp? As soon as they understand how this works, they've mastered modes (at least theoretically). The same exercise also works of course the other way round, i.e. start with lydian, add flats until you've reached locrian, add one more flat and you're back to lydian, but one semi-tone lower.

As mentioned before this is just another way of looking at the circle of fifths. Instead of changing the root and keep the mode the same, you keep the root the same and the modes change from dark to open (by adding sharps), or the other way around.

It's because of beauty of symmetry (and asymmetry) of musical scale. (WARNING: some math ahead)

Take a C major scale, and write it down the intervals between each note in number. So a halftone is 1, whole tone is 2 because it's two times the halftone.

(repeated twice for later use.)

Now you want to transpose the scale to the nearest. That is, make the scale of the same structure with a little change as possible, changing only one single note. With some trial-and-error, you would find out there are only two ways to do that. As we already know, they are F and G major:

Compare them with C major. With our notation here, to transpose to the nearest scale means to change the position of 1 and 2 appropriately. By doing that, you see the tritone 2 2 2 flips to the other side, and each note at the end of the tritone is shifted halftone, for the reason more or less clear.

41
What are modes and how are they useful?
3
Why does modal interchange work? Can any mode be used?
3
Does borrowing chords from a parallel mode change the key?
0
Theory of finding the Mode of a key
5
Are the 1,4,5 the primary chords in all modes?
0
Relationship between extended diatonic chords and modes?
7
Is Locrian a minor mode or is it a diminished mode?
1
Are circle of fifths progressions generally practical for modes?
1
What are historical and structural reasons for the prevalence of Major and Minor?