How do I play this part in 'Peacherine rag'?

I'm trying to learn Peacherine rag, but I can't understand how to read this part: 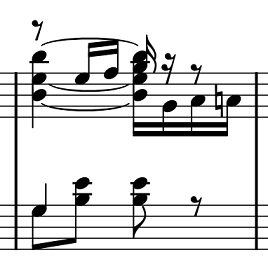 To be more precise, I want to understand:

You're supposed to imagine that there are two parts in the left hand that happen to land on the same G on the first beat. If this piece was sung, for example, one voice might be singing G, Eb, Eb, and the other G, Bb, Bb.

On the piano you'll probably end up playing it exactly as you would if that G didn't have the extra "leg".

There's a separate melodic line here that goes Eb, F, G while three other voices sustain Bb, Eb, and a higher Bb. And again they probably could have left off that extra "leg" without changing how you'd play this.

You don't play the notes of the chord (the Bb, Eb, Bb) again on the second beat, you just sustain those. You do play the Eb in that inner Eb-F-G melody. And you'll have to hold that Eb even after you play the F.

What you're trying to do is give the illusion that you are simultaneously (1) sustaining that Bb-Eb-Bb chord, and (2) playing the Eb-F-G line. Clearly that's impossible since your piano only has one Eb key, but you do the best you can.

This isn't necessarily a bad transcription or anything, piano music is often written like this to show how a sequence of notes is made up of separate melodies layered on top of each other. That can help you figure out the logic of the music, even when it doesn't literally change the note durations. In this case I think the notation in the bottom part is a little pedantic, but the way they bring out the inner melody in the top part is helpful.

As noted in the comments, all of this is because there are multiple voicings. Multiple stems mean that multiple voices play/sing those notes, which should address your first two questions.

I believe that another voice would be doing the short E-F-G run while the other notes are tied. If you are trying to do this on a single instrument, you would re-articulate the E (and play the F and G) since it is more important to include as much melody as you can.

It's not particularly written well for piano (I guess that's the instrument you are trying to play it on), but look on the top line (all notes on treble clef) as the melody, with up stems, and part accompaniment, with down stems.

This then puts the first chord as a 'backing', followed by the tune of another Eb, then F and G. The other notes under will make the next 'backing', the Bb and second Eb being held - you have to play the second Eb for the melody, and then it can be held over to the second beat, and then joined by the G. Cut off short, to allow the G Ab and A to end the bar.

You are right to be confused. It's a transcription from something, which doesn't translate too well to piano, so compromises need to happen.If you emphasise the notes with up tails, this will bring out the tune over the accompaniment. Having said that, it appears to be the original piano transcript.

Not the answer you're looking for? Browse other questions tagged sight-reading legato ragtime or ask your own question.

100
What is good software for learning how to sight-read?
5
Sight reading of triads
2
Me and the grand staff: how to achieve pacific coexistence
6
How this legato is played in piano?
3
How do you learn to read ahead when sight reading for piano?
3
Why is alberti bass so tiring?
3
How to acheive this wide stretch legato?
3
How to arrange a song written on piano for guitar?
3
Correct technique for multi string legato pull-offs