Barre chords, how to avoid or simplify?

Any way to avoid them or at least a way to make them a little easier?

A capo will, in some instances, avoid using barre chords. For example, instead of playing the sequence C F G, where F needs to be barred, a capo on the 3rd fret would need the chords A D and E (shapes) to be used to remain in the same key. The voicing would be slightly different, but to a singer it would be fine.

I'm not sure whether this is the same as topo morto's answer - but it starts off similarly.

Best bet: Cheat! You don't have to play all 6 strings. In fact rarely is there an advantage. Eg if you play an E-shaped barre chord, you could just fret the thickest 4 strings. That means you get a nice full sound and in fact it's no longer a barre chord - you can fret the strings individually so it's a lot easier. Same goes for an E shape chord when playing the thinnest 4 strings.

A "Poser Chord" (most useful on distorted electric guitars. Actually I mean 'Power Chord' but the typo made me & a few others laugh a lot) is usually just the tonic, a 5th and an octave above which equates to the thickest 3 strings on an E- shape barre chord. Maybe even that's enough to get across what you need ? This does miss out the major/minor 3rd note though so if that's an important note, power chords might not do the trick.

If you need to play all 6 string then I've found the best thing is to make sure your guitar is in a position where you can get your forefinger right across the neck easily- so it might be about how long you have the strap, and how high up the headstock is compared to the body etc. Try a few positons out- some might make it easier. For me, having the guitar angled with the headstock higher than the body works better - but that's not good for playing solos, so I get around it by cheating, as above.

It is possible to avoid barres by playing only as many strings as you can fret with individual fingers. For example, for E- and A- shape barres, you can often just play the root of the note with the barre finger, and not include the top notes.

Edit : other answers have made good suggestions about checking your guitar setup; I would suggest that a particularly important thing to check is action at the nut. A lot of otherwise decent instruments seem to come from the factory with a nut action that is a bit too high to do e.g. F barre comfortably.

I like to avoid them. Here are some chord boxes for alternatives to normal barre chords.

First off, on electric guitar and sometimes on acoustic you can change your hand position and put your thumb over the top, which you can also use to fret, along with a mini-barre on the first two strings: 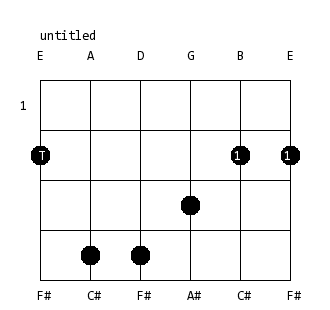 I don't find the thumb AND mini-barre comfortable but I pretty much never fully barre (that hand position is just bad for my wrist) so if I must have the first and sixth strings in a chord I do the thumb thing. Most of the time I play this: 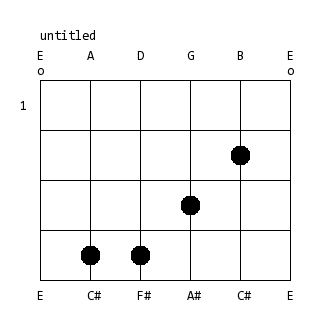 Please ignore the open string symbols, you should mute strings 1 and 6 (the latter I mute with my thumb hanging over the top). I call that the "middle four", which are my favorite strings and playing mostly the middle four is sort of a style I've developed (or onknowingly copied from someone). It does sound a little different but if any other instrument is playing and/or there is any singing, this will do the job and prevent discomfort. 99% of your audience won't know.

Obviously if you have to carry the melody on the first string then you pretty much have to do a mini-barre or re-voice the chord somehow. I also like the "middle three" a lot: 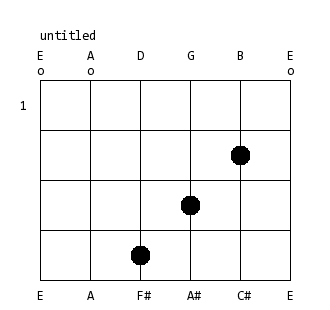 One chord I hate is the third/fourth finger "barre" shape for major chords with the root on the fifth string, especially down at Bb or B major near the nut. Most of the time I just suffer with it, but when I can (or when it sounds cooler) I play one of these: 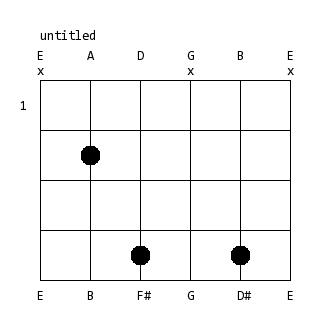 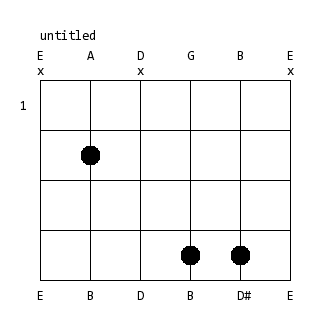 That last shape is used for the intro of "Typical" by Mutemath where it gives what are essentially run-of-the-mill chords a unique sound. All the other answers have good advice so this is just more options. I've definitely capoed up and transposed in the past many times also. Just know it is possible to almost never play a traditional barre chord. Between all the different options, I've played in bands of all kinds of genres as well as musicals and almost never had to barre to make it work.

I find it easier to barre for long periods standing up as the wrist position is better. Also, a lot of songs that call for loads of barre chords can often do without and just mute a string or two instead.

Avoiding them might prove to be an interesting exercise. You could base what you play on a barre shape and pick out notes from it, typically one note per set of two strings,getting three voices which will most often spell the whole chord and sometimes imply it. For instance, instead of a barre G chord, you could play the root on the low E, the third on the G string and the fifth on the B string. IMHO the chord shapes are very useful (see CAGED system) but you don't have to actually play them. You don't have to play anything you don't want to.

However if you wish you could play them but find it too frustrating, I'd say try playing them on a light gauge, low action electric guitar and work your way up eliminating tension and discomfort. I learned on an old, battered accoustic guitar with rusted strings and no barre event sounded right, then got my hand on a cheap star copy and suddenly realized I actually knew how to play them.

They can be avoided by using the retunings suggested in this question What guitar tunings allow chords without fretting between live strings?

Otherwise your option is to avoid notes and strings in the first place, which would substantially compromise your versatility and/or force you to adopt (possibly overly) colorful alternative voicings.

Not the answer you're looking for? Browse other questions tagged chords acoustic-guitar or ask your own question.

68
Best method to learn to play barre chords?
13
What guitar tunings allow many chords without fretting between "live" strings
0
Why do barre chords sound bad when I play them