Why are time signatures needed?

I always have had trouble understanding the time signature in music. I have read about this, of course, but I don't understand it completely.

Days ago, I think I got something that I want to confirm with you.

This is my reasoning:

Thanks for your help.

Your basic premise is incorrect. Both of the examples you describe are represented through the notation, and are not captured in the time signature.

In the image below, the first bar represents your first case, and the second bar your second case. 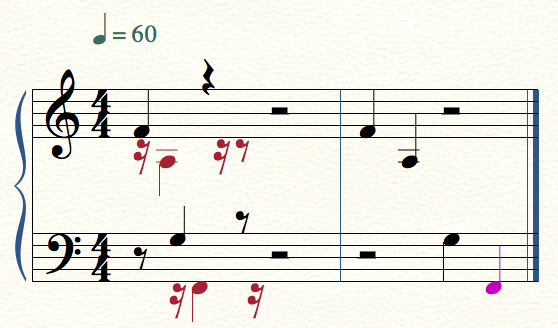 The basic point of a time signature is as an organizing principle for music, to give the music a sense of structure and to help performers in understanding how to play it. The first beat of a bar is usually accented; which other beats should be accented is often explained through the use of the time signature. (For instance, in a 4/4 pattern, the third beat often carries a weaker stress than the first, but stronger than the second or fourth beats.)

Breaking even a short piece into measures and providing a repeated rhythm for those measures is just one aspect of the immense benefit of using time signatures.

Another way to look at it is as an analog to key signatures. You don't need to use a key signature - you could just put accidentals wherever you want them to be played. But using key signatures is extremely helpful, even when there are a lot of accidentals, since it gives you a home base for the tonality of the music.

No-one plays notes for a pre-determined amount of actual milliseconds - it's almost impossible to do, and certainly would not sound musical. How on earth would one re-set the stop watch to time the next note?

The PULSE of a piece is stated in bpm, but this is a guide rather than a target, and makes sure that one performer or many, as in a band, keep together. In LEGATO playing, one note follows another without a perceivable break. If it's STACCATO, the attack of each note is at the same instant as the legato, but there's a gap between that note and the next.

You seem to be confused with the whole concept of music notation and its translation.

EDIT -Or - does the lack of a time signature include the lack of bar lines to match it? If the bar lines are still present, there maybe is no real need for a stated time signature, as a count of the first full bar quickly tells the player. A different can of worms.

You seem to talk about the second topic under the title of the first. From both issues there is no connection to how many notes your instrument is able to play. In your example with the given metronome indication the second quarter has to play at 1s, the 3rd quarter at 2s etc.

Note, that many composers do not bother with metronome indications but stay with an italian term like "Andante", which has quite a range even when using the table from a metronome which even may widen with additional knowledge of the piece. The metronome numbers may then added later by the editor of the sheet music.

8
Do time signatures make sense?
29
Why are measures (aka "bars") important?
5
Why is there no indication of relative loudness on sheet music?
0
Why top number of time signature/dividing music into bars is required?

5
Do you need anything beside the BPM and number of beats per measure to specify a rhythm?
7
What exactly is the point of time signatures and measures?
6
9/8 hybrid vs compound time
1
Confused by time signatures
16
Why use odd time signatures?
10
Sheet music time signature question
3
BPM, beat durations vs frequency