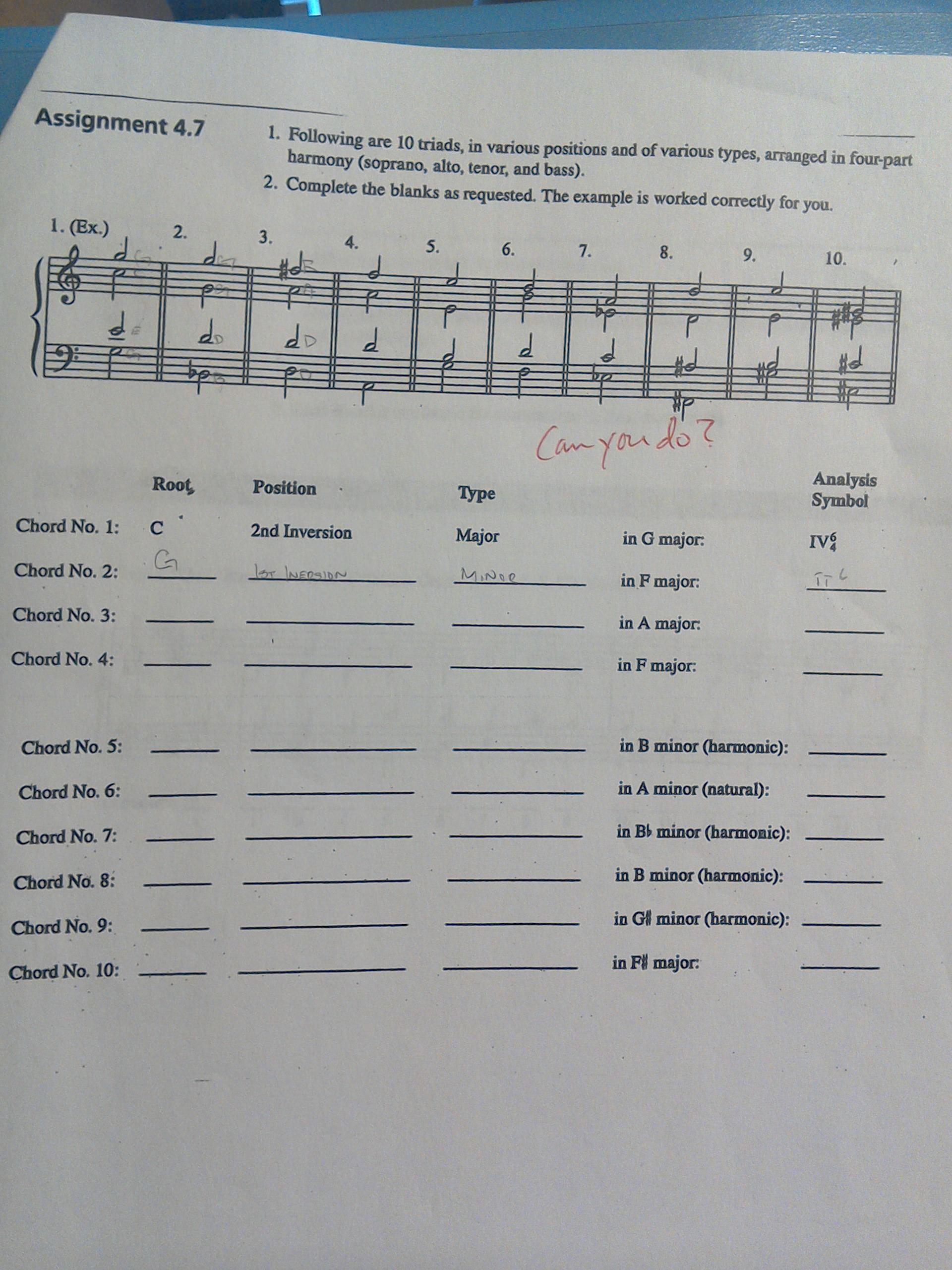 I am not completely understanding how I find the major and minor chords. I understand half of what is going on, but not fully. Can someone please help.

The thing you need to learn is what notes are in a chord. It doesn't matter how they are placed in a chord; it still is the same.

The basic chords are built on thirds. So, take the notes you have and try to put them in order of thirds. We need a Root, a third (major or minor) and a fifth.

The fist chord you have is: G-E(bass clef) C-G (treble clef).

The notes we have are G,E,C and G (again; no need to mention it twice)

Let's take the lowest note and see if we can built a chord of thirds on top of it.

So, our chord doesn't have G as a root. Let's take E and repeat the same process:

So, we shall take the note that is left and check the same thing:

In your example, the G (fifth of the chord) is on the bass, so the chord is on second inversion.

The same goes for all the other chords in your examples.

Now, if in your example you have some kind of diminished or augmented chord, you will need to do the same procedure as before, but the differences are:

So lets take them in turn.

3) The third question asks you the type of chord the main ones you can expect at this stage of your theory education are.

The roman numerals gives the indication of the chord and on which note of the scale it is built on. You get...

I'm probably too late to help with this particular assignment, but here in a nutshell is how inversions work.

Take the notes of the chord, rearrange them to stack in consecutive thirds, removing any octave duplicates in the process. For instance, the first example has two C♯s. We'll use just one in our stack, which we'll show as a crochet (quarter note) chord to the right of the chord we're considering. The lowest note of the stack is the root. Thus in the 7 examples we have here, the roots of the chords are C♯, B♭, C, G, A, F and C respectively. (The stack of thirds is the chord's canonical form. Which octave we use is immaterial: we're actually dealing with an abstract representation of the pitches.)

When you have done that, which note of the canonical form is in the bass determines which inversion we are using. I've shown this with blue note heads for the chords you are most likely to deal with at this stage in your instruction, triads (the first three examples) and dominant seventh chords (the last four examples). Inverting other seventh chords works exactly the same way as it does for dominant sevenths. Inverting ninth chords adds a 4th inversion with the ninth in the bass.

Occasionally you will run across gapped chords (usually only dominant sevenths at this stage in your instruction). The canonical form will have a missing note which you can supply to work out what the chord and inversion is, as in Ex. 1a (the missing note is in red). (Hint: Most of the time, the first note to get dropped is the fifth of the chord.)

Chord symbols using the scale degree are a different item: they combine something of the chord's makeup with its degree of relationship to the tonic of the key. They are effectively two notations combined, a notation for the scale degree and kind of chord, and a notation that shows how they are arranged as intervals from the bass (which, in effect, shows the inversion of the chord).

The second part of the chord notation tells us the inversion, and it does so by specifying intervals from the lowest note of the chord. To do this, we find the canonical form of the chord, and then we move any notes that are below the note representing the bass up an octave, so that they are in the closest position possible above the note representing the bass (see the rightmost chord in each bar of Ex. 3), and then we represent the intervals in a column beside the Roman numeral, from the widest from the bass note at the top to the narrowest from the bass at the bottom.

Ex. 3a shows how this applies to triads, using a C Major tonic chord moving from root position to 2nd inversion. The brackets show the intervals that are used in the notation for each chord. The convention, however, is to use just enough of the intervals that are needed to determine the inversion, and that notation is shown in blue. Thus we don't need to specify 5 and 3 for the root position: these intervals are considered canonical and we just call the chord I. Likewise, the only interval that differs from the canonical form in the first inversion is 6, so we call the chord I6. Both intervals in the 2nd inversion are different from the canonical form, so we retain the entire column.

Ex. 3b shows the same calculations and notation for sevenths using the dominant seventh of C major, again in order from root position to 3rd inversion. These Roman numeral notations are already in conventional form, with just enough to specify the inversions (usually just the dissonant intervals). There are other conventions to specify more complex chords, but they are probably not germane to this level of instruction.

Basic chord theory: Chords are made of three notes, being the root, third and fifth of the scale. First example is a C Major chord, so the notes for that are the root, C; the major third, E; and the perfect fifth, G. If we were talking a C Minor chord, the notes would be C, E♭ and G.

I'm not the strongest on notation. I'm seeing a G and E on the bass clef and C and G on the treble. That and the "Root = C" at the top of the page, so I'd either focus on the C-ness of it and say C/G (IV in context of the G major scale), or I'd work restating it working as a weirdly structured G note, using the perfect 4th (C) and major 6th (E), as your worksheet says. I wouldn't do both. Unless that's saying that it's a C with the G a 4th above and E a sixth above, but I normally see numbers detailing intervals going treble-wise from the root....

Key here is the 1-3-5 relationships. Find a fifth interval between two notes, and the remaining note is a third away from one or the other of those two.

Not the answer you're looking for? Browse other questions tagged theory chord-inversions or ask your own question.

14
I need help understanding the concept of chord inversions.
3
Chord inversions?
1
Understanding note spacing
5
Determining the seventh chords of a key
3
Roots of 6th chords on the guitar for different inversions/voicings
4
Why use Pitch Class Sets to describe music?
3
How do inversions of extended chords work?
1
GUITAR - C major scale progression
3
Keyscales & Melodies
4
Why does G-Major work well within a C-Minor progression?