Does anybody have any additional information regarding the origins and usage of the Treble Alto-Tenor Clef symbol? I found it in the late Gardner Read's book on Music Notation, and beyond that - NOTHING. Does anybody know anything more about this symbol and where it may have come from? 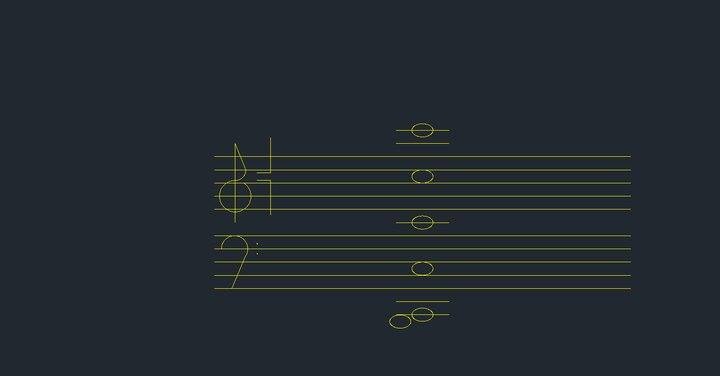 theory history clefs
Share
Improve this question
edited May 4 '15 at 13:16

My best guess as to the intention of this notation would be that the entire grand staff is being transposed down an octave.

As I'm sure you know, the treble clef on its own places C5 on the third space. The C clef used for alto/tenor clef is meant to be centered upon C4, or middle C. So, the fact that a C clef is centered upon the third space of the upper staff would indicate that the entire staff has been shifted down by an octave.

Initially, I was considering the C clef to only be modifying the treble staff, but if that was the case, then the note on the ledger line in the middle of the grand staff would be ambiguous. Is it a C3 or a C4? And also in hindsight, I can't really think of a more efficient way to shift the entire grand staff in any direction than to simply designate which C is middle C with a C clef. You could use 8va notations but they would get tedious, and while you could try putting a little 8 on the bottom of each clef in the grand staff, I don't think that's any more reasonable than what is displayed here.

You have not exactly explained where you found this example: in Gardner Read's book (page 55) there is an example of the upper clef (G clef with funny bracket), which he explains as one form of the clef for a tenor part, meaning G clef 8vb (and not the same as the "tenor clef", which is a C clef). I can't see this particular combination of two staves.

On the face of it, this should mean a part for tenor voice and a part for bass (voice), which leaves no anomaly at all. I think it is unlikely that this indicates an entire grand staff transposed down an octave, because there is no indication that the F clef is 8vb, and no bracket suggesting that this is a grand staff.

(Edit) I have just seen that there is a note floating in the middle. Hmm. Somehow I find it difficult to believe that this is a real example from a score, rather than some sort of attempt to illustrate different clefs.

Very interesting diagram. I hadn't ever seen the use of the "C-clef" to mark the pitch C in a space, rather than on a line. However, as @Old John points to in his comment, the Wikipedia page about clefs deals with just such a clef. At the top of the page this clef is first hinted at:

Only one clef that references a note in a space rather than on a line has ever been used.

And then later, this clef is revealed as being the C clef (most commonly used for the tenor and alto clefs, but also soprano, mezzo-soprano and baritone). However, in this case it indicates middle-C as being in the third space (from the bottom) of the stave. This, of course, means that all notes are identical in pitch to those when using the treble (G) clef, except that they sound an octave lower. It is not surprising that this clef is not commonly used to denote treble clef notes sounding an octave lower, as there are other, well established alternatives. Therefore, these two octave-transposing treble clefs, and the following "C" clef have the same function:

The first of these is commonly used, for instance for a tenor voice part or for an octave transposing instrument such as guitar (although a normal treble clef is also used, as the transposition is implicit). The second clef is less common. And, as I say, I had not seen the third clef before.

The Wikipedia page points out another good reason not to use this clef:

the C clef on the third space, [is] easily confused with the tenor clef

However, this doesn't explain a couple of aspects of the diagram you show.

Although I'm sure the book you found this example in is a great resource, this example is certainly ambiguous, for the reasons stated above. (Having read the rest of @Brian Chandler's answer, I wonder if the musical example you show is in fact different to that found in the book?)

It looks like the strange Clefs you have provided are the result of a few musical situations which up until relatively recently, were somewhat confusing to formally notate, thus unusual clef suggestions in the late 19th through the early to mid 20th centuries.

Essentially, there are a few categories of instruments which transpose, usually down by an octave or two, but do not wish to think of themselves as transposing instruments. Two prominent examples would be the Tenor voice, and the Bass clarinet.

For the tenor voice, one would be tempted to simply write a treble clef, which is often good enough for the performer. Since the Tenor voice is higher than the bass, it would make sense to read the treble clef. However, for the accompanist, and the composer, a confusing situation is created. You often have a treble clef which reads an octave down, joined to a bass clef which does not. This makes the figures quite difficult to sight read on piano correctly, often causing confusing when the accompanist inevitably reads the bass part an octave lower than intended.

So, a few clefs were used over time to try and make it clear the first time, that the accompanist should only lower the treble clef. None of them really stuck, except perhaps the treble clef with the 8 below it - that has lived on quite well in choral music at least. Of course you still have the problem with middle C - which might be doubled, or an octave below what it should be depending on which way the note heads point.

For instruments like the bass clarinet, a composer attempting to sight read the score has to simply remember the transposition. It's not that bad.

Beyond this, I don't know where the C clef has been used this way. I wouldn't be surprised if there is a medieval example somewhere, but using the C clef in the way you demonstrate in your diagram just isn't used today.

There is nothing ambiguous about the different clef symbol denoting the 3rd space in the upper stave as being the location of middle C. In fact it is quite clear. Because people began writing bass music using only the single F Bass clef symbol, and not a Double F Bass clef symbol, this transposed the written bass music up and octave, which in turn moved the middle C up an octave to be located in the 3rd space of the upper stave. The symbol denotes the space and not a line as being the location of middle C. The famous movable C clef symbol only denotes a line as being the location of middle C, and not any of the spaces between the lines. Originally the strange symbol was used in conjunction with the Treble clef symbol, but it was immediately demanded the Treble clef symbol be removed, with only the strange symbol being used alone for denoting middle C, in developing the Contra Basso/Alto-Tenor grand staff. I found the symbol in the late Gardner Read's book on Music Notation, and when I showed it to a music teacher of mine, who holds a Masters in Music, he immediately demanded the Treble clef symbol be removed for the final adaption and adoption of this grand staff to be used by modern bass players. I agreed and it is now presented to you all.

The C clefs originated from the clefs used to notate ancient Gregorian chants. The C - shaped thing at the beginning of each barline showed where C was in the staff, and is also why the weird things we have today are called "C" clefs. The clef show here would have been the predecessor to the C Baritone Clef (which is almost never used nowadays). The "C" clef was put on other lines depending on the range of the chant, much like we do with alto and tenor clef today. 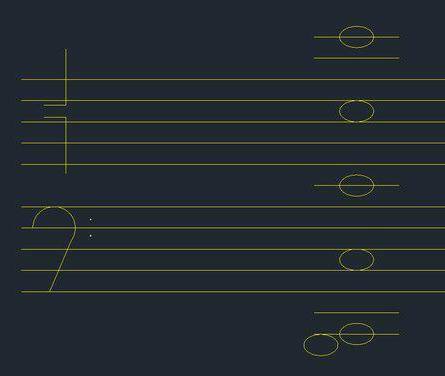 The Treble Alto-Tenor clef symbol was found in the section on stringed instruments in the now late Gardner Read's book on Music Notation. Where he found it is a bit of a mystery, but it is valid, was used at one time, and just before becoming totally extinct has been brought back for a revival in usage.

As side from a website I set up on Facebook, and this posting here in Music Exchange, you won't find any listings or postings on the Alto-Tenor symbol anywhere on the internet. There are a zillion postings showing the well known and famous Movable C clef symbol, but there is literally nothing on the Alto-Tenor clef symbol. The intent is to bring this clef symbol to your consciousness towards reviving it for use by modern bass players - before it becomes totally and completely extinct.

Just as nobody can trade mark the alphabet or numerals, or just about all other symbols we use, for example the F Bass clef, G Treble clef symbols, this symbol is at least three hundred years old, and therefore cannot be trade marked and owned by - anybody. The effort here is simply to adapt it and the adopt it for use by modern bass players. Nobody can charge money for it's usage, but we can all use it in our music - for free, just as we use the alphabet to write the words we are reading.

Should a new name for this symbol be found since it might be possible to move it also just as the movable C is moved?

For now, the symbol is simply known as the Alto-Tenor clef symbol.

Not the answer you're looking for? Browse other questions tagged theory history clefs or ask your own question.

3
Tracing the origin of the clefs

29
Is there a Relative Pitch Clef?
3
Bass and treble clef brass parts
26
Piano with two treble clefs and 8va on grand staff
9
Why does this version of Für Elise have d# then e both with treble clefs?
4
When did voice parts start using treble clef?
4
C Clef Showing Middle C on the Second Space: Printing Error, or Obscure Clef?
31
Aldous Huxley and 5/4 Meter in Music Predating "Take 5"
4
When should tenor clef be used?