How to make a song with chords and scales?

I play acoustic guitar and have been learning a bunch of chords and scales. I can play many progressions already, and I am starting to write music.

I am wondering how you would bridge chord progressions and scale progressions together without sounding choppy?

So far I have tried taking a chord from the progression that I am playing and I will choose a higher note from the triad, and slide up the fretboard until I find the pitch I am looking for and start my scale progressions from there, but it seems like there is akwardness, or discomfort in the transition.

I am really just a folky backwoods type guitarist, not sure if that helps.

thank you for any advice.

Although it's possible to change chord progressions and scales in a song, it sounds to me like doing so effectively is currently beyond your skill level. So, what you will want to do is pick a scale and then harmonize the chords to it, or vice-versa.

The first thing you need to do is decide what key you're in; this will determine the scale you use (for example, if you're in C you might use the C-major scale or its relative minor). This will also determine the chords you have available to you (unless you decide to use chromatic notes, that is notes outside of the scale but for now, don't do that.)

So, let's say you decide to write a song in A (which I tend to do a lot). The A-major scale is as follows;

And the chords would be;

Now, construct your melody. Once you have that melody, what are the structural (IE, strongest) tones? Those are the tones that you want to hang your chord changes on. (In other words, you change chords on a structural tone). The chord you select should harmonize with the note it's being played under, and the way you do that is by picking a chord that has the note from the melody in it.

For example, your melody starts on A and goes to B, D, and then ends on E before looping back around to A. You might choose Amaj, Dmaj, Emaj as your chord progression. Or you might just use a vamp (two-chord progression) and alternate between Amaj and Emaj. At that point it's up to you.

I highly recommend you score a copy of The Complete Idiot's Guide to Music Composition - it's an extremely simple and accessible guide to getting started in songwriting. I learned everything I know from it and still consult it to this day.

Chord progressions are nice, and a lot of good songs have been made using them, but to move on to more complex patterns (or make your own progressions) you really need to learn the personalities of the different chords as well as some common transitions between chords. I'll try my best to explain it, but it is really hard ... especially on a forum. I'll use the word 'suspense' a lot, and I hope you'll catch what I mean. It is really everything in music because people expect for the sound to go to a certain place and there are ways create different levels of expectation. You can then be nice and give that to them (play it safe at the risk of sounding boring) or shatter their expectations and bring them to a new place (which can add a lot of beauty and soul to the song at the risk of just sounding gawd awful).

For my examples I'll do everything in C, but you can convert it to G or B or 1 or I or anything you want (other then a minor key, which will have a different sound).

In music there is your base chord (the key) and then there is every other chord that each have different feels from safe and soothing, to expected, to sad, to romantic, to exciting. It's all pretty subjective and it depends a lot on the context of the song, but that's music.

The base chord is 'home' for most music. You can think of it as the place that the listener is always longing to return to (most songs end on the base chord) and it is the standard that it judges every other chord by. This chord has a very safe feeling and its nice to come back to, but starts to get dull if you stay on it too long. Who wants to just sit at home all day?

So in C you have your 4th and 5th chords - F and G. These are by far the two most commonly used chords (other than the base chord). They both have almost an expected sound to them - as in people expect to hear these chords and they are very safe (I hope this makes sense). G has a slightly harder sound to it then F does, and G creates a little more of a suspenseful feel leading into the C.

The next most commonly used chords are the three big minor chords - am, dm, and em. - As a slight aside, you should probably put in the back of your mind (even if you don't understand this yet) that am, dm and em are the relative minors of C, F and G respectively.- The most used of the three minor chords is am because it does not challenge the ear at all. It has very little suspense to it, it sounds like a 'home' chord (which is no accident!). It just breaks up the song and adds that minory feel to the song without going overboard. The next two, dm and em are stronger then the am. I don't know how to describe the difference in their sounds. You'll just have to try them out.

Now you have the more interesting chords. These chords are used far less often because they are just more powerful. They tend to take the song in new, and often specific, directions and require more finesse to use them (I mean that you really need to know where you are going to go next because the ear will be like 'Hey! This is nice but you better go somewhere with it'). So here they are in no particular order:

E - This is my personal favorite. It is the closest a major chord can get to sounding like a minor. (It's the fifth of C's relative minor, am, which gives it a lot of its sound - a little off topic but worth pointing out) It adds a lot of, well, romance to the song. Think "Georgia on my Mind" or that chord that John Lennon plays right after the line "You May Say I'm a Dreamer" that adds so much suspense. It is common (the listener almost expects it) to follow the E with F or Am.

D and A - The super major chords. They take everything you like about major chords, and crank it up five more notches. Think "What a Day for a Daydream" or that "She F-ing Hates Me" song.

fm - If D and A are the super major chords, fm is the super minor chord. It is not often used because it is so powerful. It brings the song to a whole new (I want to cry) place. Think "Desperado" during that 'Come to you senses' line or the fourth chord in "Creep". It is very commonly used after F major because F somewhat prepares the listener for the big shock to come.

I hope that made at least a little sense. Of course there is a lot that I left out, most notably the minor key, but it should at least give you a start about how to think about this stuff.

That's a great question. Let me tell you what works for me.

When I write a song, I usually start with a chord progression because that is easier than starting with a melody in my experience. A chord progression will provide the framework for the melody. You need to know what chords go in the key you want your song to be in. Some handy charts might look like the one below which shows the chords for all the major keys. 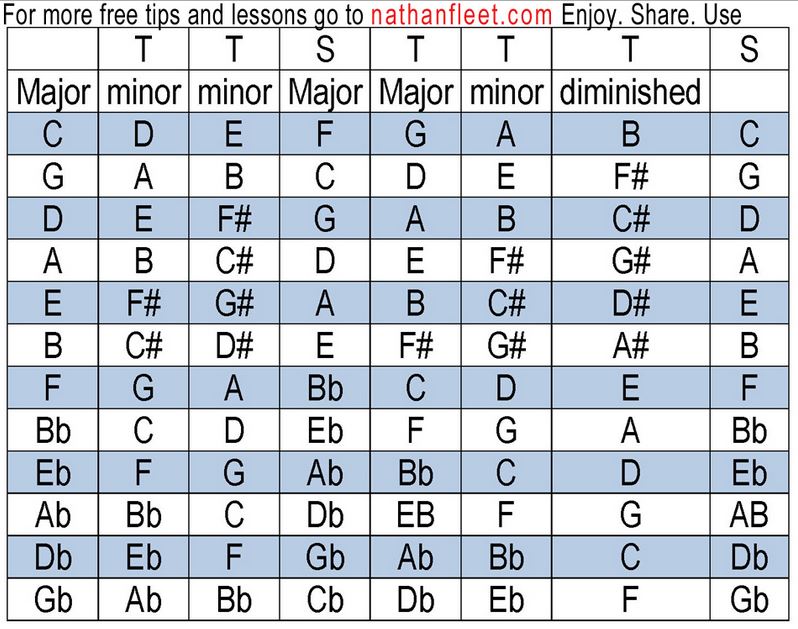 Watch this very entertaining video to see a perfect example of this fact: Axis of Awesome Four Chord Song

Once you establish and write down the chord progression, it becomes much easier to write your melody based on the chords in your progression. Melody notes that are sung or played over an underlying chord should include some of the notes in the chord because those are the notes you will hear when that chord is played.

If your chord is a major or minor triad, it will only have three notes so your scope here is limited. But other notes you can use while playing a chord, are notes that are in they key of your song and also in the key of the root note of the chord you are playing.

So if you are in the key of C and playing an F chord, the 3 notes in the F major triad (chord) are F, A and C. Your melody played over the F chord should start with one of these three notes on or shortly after the chord change, and should include at least two of the three notes in the F triad (can be an octave apart).

It's really much easier than it sounds. Again I would emphasize the notes in the triad most as those will be suggested by the chord and can be repeated or played an octave higher or lower to get plenty of movement within your melody while using only 3 notes.

Good luck with your songwriting.

Not the answer you're looking for? Browse other questions tagged guitar chords scales chord-progressions songwriting or ask your own question.

20
Guide-lines for creating a simple chord-progression?
10
How do I write an original melody?
3
What notes to sing with chords
1
When writing a melody, is the scale used determined by the current chord playing (in the chord progression) or by the song's key as a whole?
1
how to find right chords for a riff
1
How to find what chord harmonizes with a given note in a given context?
0
Changing a song's key vs. changing chord voicings
0
Chord Progression Composition
0
Could you have a minor chord in a Major scale song?

14
Can any diminished chord be used as V anywhere?
5
Barre chord F and barre chords in general
2
Forcing a slide between different chord shapes
10
Everyday guitar routine
2
How do I manage internalizing foundation for chords, scales, hamonies and voicing
4
My jazz guitar doesnt sound like jazz
1
Chord Theory: Verse, Bridge and Chorus
4
How to turn each chord in a progression into separate scales?
0
Common scale tones when transiioning to a new chord