How can I identify Gregorian modes in Bach music?

I'm learning these Gregorian modes things and I'm trying to identify these modes in a Bach music, Invention 8 F Major, for example: 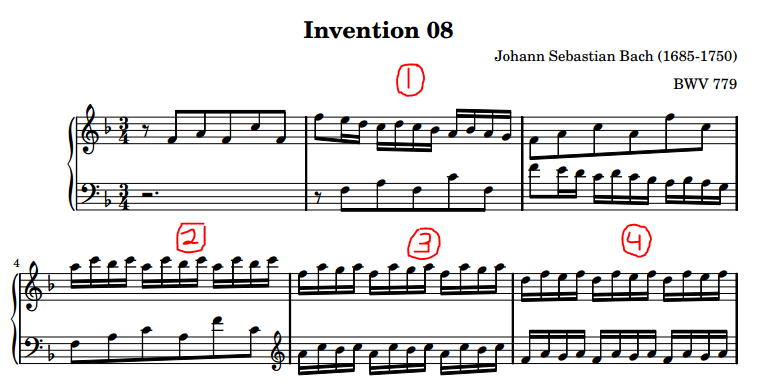 The music starts at F in Ionian mode. But I think It changes when getting at 2, 3 and at 4. If it really changes, changes for which mode? I'm completely lost, any kind of help will be good!

By the time of Bach, most of the old church modes were no longer being used. The Ionian mode stuck around, but in a common-practice context we usually call it "major." The Aeolian mode also stuck around, however it was consistently modified to usually have a raised leading tone, and often have a raise submediant as well. When the 6th and 7th scale degrees are consistently altered according to function, "Aeolian" is no longer an appropriate term, and we should code the mode "minor." The other modes temporarily fell by the wayside.

The chunk of the eighth invention that you have posted in your question is unequivocally in F Major throughout, there aren't any modulations or mode changes. When you look at music of the Baroque, Classical and Romantic eras, you shouldn't be looking for mode changes. You should be looking for chord changes at the local level, and key changes (shifts of tonic, not shifts of mode) at the larger level. There will occasionally be mode changes, but only from major to minor or vice-versa. The further you get into the Romantic era, and, especially once you start looking into the twentieth century, the more likely it will be that you might see the re-emergence of the other modes. Pop/Rock music, for example, is often modal. Otherwise, you generally have to go back to the Renaissance and Medieval music to find most of the modes used consistently.

Don't confuse a 'modal scale' with a 'Mode'!

The whole song is in a 'Mode' and in Bach's times they didn't even call this aeolian or ionian anymore but simply major and minor.

Of course, the scale starting from the II (G) of your tonic (F) has the same interval structure than a dorian scale would have on its root (G-dorian). But unlike in F-major the whole 'Mode' of G-dorian is 'dorian' - but in F-major it obviously is 'major' - (or 'ionian' if you prefer to express it with terms of 'Modality').

In case you wanna make a deeper dive into this:

Difference between Modality, Tonality and Chord-naming conventions in a more practical way?

Bach did write some modal music - for example, the Dorian fugue. However, Bach was at the forefront of developing the diatonic system, so in most of his work, modes do not generally apply. To identify modes in general, you need to check the range of the voices and the note that the piece ends on.

Not the answer you're looking for? Browse other questions tagged theory modes or ask your own question.

0
Difference between Modality, Tonality and Chord-naming conventions in a more practical way?

41
When were the terms “Major” and “Minor” applied to keys?
10
When to use different scales or modes over chord progressions?
1
confused about modes and the proper way to use them in my playing
2
Gregorian modes in Renaissance music (with Cabezón's 'Tiento del Cuarto Tono' as an example)
5
Memorizing modes on guitar fretboard
1
How to use modes in popular music?
1
How to hear modes in music
3
Modes of the “major scale” or modes of the “diatonic scale”?
7
How to identify modes in Medieval counterpoint?
8
Can you help me understand Modes from the aspect of chord changes?