I am attempting to learn guitar, and I keep coming across this notation in various apps that I've downloaded.

Can anyone explain what they actually mean and how they might relate to each other and other similar notation?

Also when is it appropriate to use this notation?

guitar notation tuning
Share
Improve this question
edited May 29 '15 at 8:30

The letters (E,A,D etc) refer to the note. The standard tuning for the guitar is E,A,D,G,B,E (Last E is two octaves higher than the lowest one).

Now, the numbers after each letter refer to the specific octave (Scientific pitch notation) of the note. As you know, there is more than one note named E. How to tell which one is which? With numbers! The number indicates the note's octave.

Here you can see the different C's: 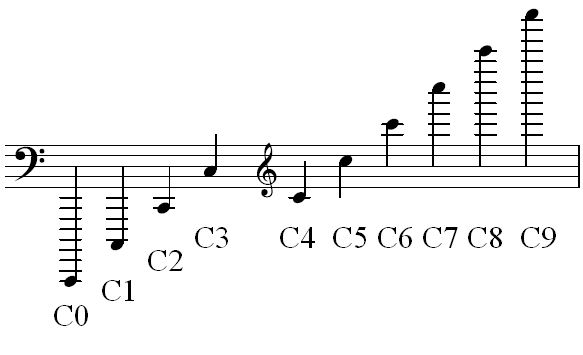 So, E2 (lowest of your guitar) would be a third above C2 in the image above. A2 would a sixth above the C2 etc.

Generally, if you simply say you tune your guitar to E,A,D,G,B,E (without the numbers), it's the same thing. People with still understand you. But if you want to tell someone the exact octave of a note, you can use the aforementioned numbers. So, being thorough, the exact standard tuning of the guitar is the one you mentioned, which is: E2 A2 D3 G3 B3 E4.

Αs it has been mentioned in the comments, the guitar music is written one octave above than it's played. So, you wouldn't see guitar music in the bass clef.

They're just the "standard" numbers of those notes on a full sized 88 key piano: https://en.wikipedia.org/wiki/Piano_key_frequencies

Not the answer you're looking for? Browse other questions tagged guitar notation tuning or ask your own question.

6
What is the terminology for how we identify numbered notes like C4, E3, D6, etc?
3
Notations mentioned in answers re. trombone
2
What do the numbers after a note mean?
1
How do I tune my guitar like a bajo sexto

0
Help me figure out tabs for "What kind of woman is this"
10
When tuning a guitar, why is it only in tune for a moment?
4
String gauge, scale, and tuning relationship? (Guitar in particular)
8
What does a pair of long horizontal lines between two whole notes mean?
10
What exactly does it mean to "play over the changes"
9
What does this notation mean? It is two numbers in brackets
3
What does two chords notated above one another mean?
3
"D.S., D.S. Al Coda, To Coda" Confusion