How are keys in the circle of fifths related?

I know this seems like a basic question, and in the traditional sense, I actually know how they are related. Though, while reading a book titled 'Harmony for Computer Musicians', I've come across a geometric image that is titled 'Relationships between keys on the circle of fifths'. 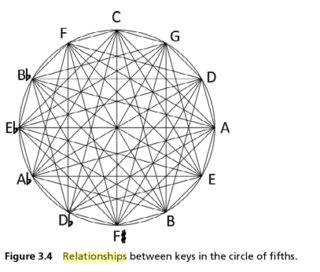 So, lets take C. C is not connected in any way to B-flat/A-sharp or to D. It is, however, connected to F and G, the author says that this was because they are the notes that lay directly a perfect fifth above/below note C. However, there is no explanation of why it is connected to E-flat, A-flat, D,flat, G-flat, B, E and A.

I have no clue as to what's going on. I have wasted a good few hours reading further into the circle of fifths and trying to figure out for myself why this geometric diagram is connected the way it is, but I can't figure it out. If anyone could help me, it would be VERY much appreciated.

The author seems to be actually attempting to connect all the keys and it may be unintended that there are keys that are disconnected as in the paragraph after he starts talking about modulation and changing keys.

When and if the key of the music changes-- a process called modulation-- this will always be from on the circle to another... This can be more readily appreciated if we draw in the various relationships between keys within the closed circle. The result is a complex geometric diagram that precisely reveals a precise map of key relationships.

The picture is confusing as is and like you said not very well explaining the concept of why keys are related so let's take a step back in this to understand how keys are related.

The basic pattern for a major scale in whole steps and half stets is:

When we use the pattern on with C as the tonic we get the notes:

When we use the pattern on with G as the tonic we get the notes:

When we use the pattern on with F as the tonic we get the notes:

Now, let's take a closer look at the difference between F and G which also aren't connected on the linked graphic. These keys have 5 of the 7 notes in common so they are pretty close, but it's not as closely related as they are to C.

Another thing to note is that the notes they have in common are G, A, C, D, and E. As you can see F, which is the tonic of F major, does not appear in G major, but G appears in both. So even they are pretty closely related, it's a little harder to go from G to F due to the F not being common in both then it is to go from F to G since the G is common in both.

The keys that have the weakest relationship are a tritone (Augmented 4th/diminished 5th) apart. For C these keys would be Gb/F# which in the circle are the furthest away which is for a very. It should be noted however that even though they are the furthest away it's still possible to modulate to them which I kind of think the author wanted to point out that it's possible to go to any key from any other key with a bit of work and carefully crafting a progression to get you there.

So as far as the key relationships, the closer in distance in the circle they are the more they are related. You can get to any key from any other key, but the closer the keys are the less effort and natural it is to modulate to which may have been what the graphic was trying to depict, but came across pretty poorly. I drew up a picture to represent how closely related keys are based on distance. The numbers on the line represent how many notes the keys have in common. 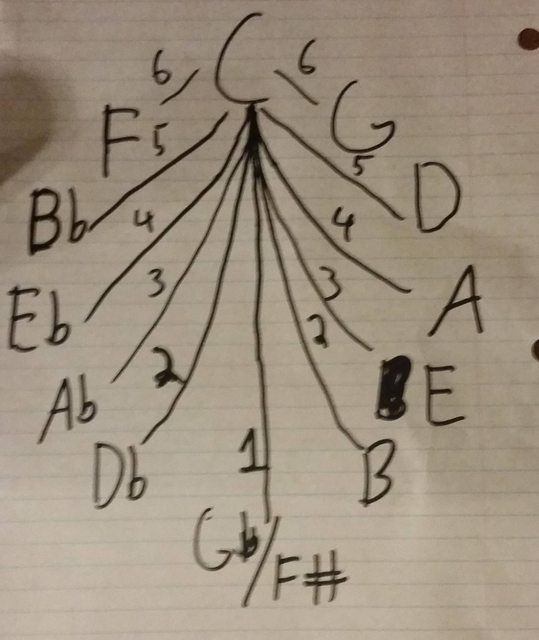 Not the prettiest graphic, but it should visualize how related the keys are in a similar manner as the author tries to get across.

0
Why do certain keys sound good together?
5
Why do the keys in the circle of fifths have the pattern of accidentals that they do?

29
Are sharp keys "bright" and flat keys "dark"?
5
Are there geometric symmetries in musical harmonics?
2
Confusion about mixing major and minor pentatonic
9
Why is the hexatonic scale that can be derived via a chain of perfect fifths so little-known?
4
Why does the circle of fifths have to be symmetric
11
Fivefold division of the whole tone - What does it mean?
1
Why does the relation between E major and Ab major feel especially connected?
5
Key signatures in Dvorak 9th symphony
8
B flat major triad - music theory