Let's say there is a concert playing, and within the audience, there are three people: 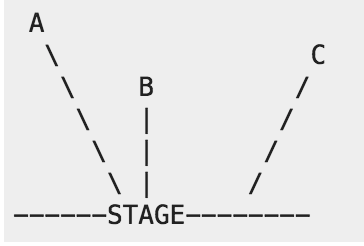 They are all receiving the same dominant input (from the speakers on the stage), but I'm assuming they will each have different variations (volume, noise, etc) of the input sound. What will be common to person A,B & C - will it be frequency, pitch, something else?

I'm trying to map a certain attribute from input audio to a value, and would like the value to be the same for each member despite its relative location to the audio source. Any help will be appreciated!

As far as the direct signal from the speakers, you would expect that the actual waveforms to differ by only a change in amplitude and a delay; both of these only depend on the distance from the speaker to listener. The change in amplitude is due to the 1/r^2 decay as the sound spreads over larger and larger spheres. The delay is due to the speed of sound (approx. 1 foot per milisecond) -- it just takes longer for the sound to get to the more distant listener.

Let A(t) be the pressure of the sound waves at the location of listener A. Then B(t) = c*A(t-d), i.e. the signal at B will be a scaled, and delayed version of what the listener at A heard. Similarly for C.

This discussion only considers the direct speaker to listener propagation. If you take into account the walls of the room, each listener hears multiple copies of the sound, due to reflections off the walls, and the analysis gets much more complicated.

There will be no sound in common among the 3 listeners. Consider that sound travels at a relatively fixed speed over distances regularly found in concert venues, so the sound will take longer to reach person A than person B or C They will therefore hear anything that happens on the stage later than B or C.

But the PRACTICAL difference will probably be negligible. For example, a light show will be "close enough" for all three viewers if the distances are similar to those found in an amphitheater or indoor venue. You'll begin to notice the distances in a setting like a sports arena - try to synchronize two sides of a college football stadium in a responsive chant, and you'll see the lag effect. Neither side hears anything in common at the same time - but both sides hear the same sound at different times. Or have everyone clap together; that's pretty much a great way to guarantee a train wreck.

For sonic pressure (volume), you won't be able to compute it in a meaningful way without knowing the distances, at least relatively, from the sound source.

Even light will not be exactly common to A, B, and C, but only in a very abstract kind of way. They will all experience the same show together, albeit at slightly different times.

The answer to this question varies depending if it's discussing an idealized scenario or a real-world scenario.

In an idealized scenario with a point-source of audio on stage, the three different positions will hear

i.e. when low and high frequencies are perceived as being the same amplitude, the lower frequencies have more power, thus they carry farther, since the distance dropoff is a function of power, not amplitude.

If you're talking about a non-idealized real-life stage, there are other factors that ALSO come into play, such as lobing (horizontal and vertical interference patterns between speakers and speaker components), phase differences between different frequency ranges due to speaker placement, number of speakers, etc.

Not the answer you're looking for? Browse other questions tagged sound frequency audio or ask your own question.

1
Why do PA speakers driven with more power deliver clearer and better sound?