How can I alter a melody to fit a new chord progression?

I'm playing around with algorithmic composition, and I have the following problem.

This is what liquid notes (http://www.re-compose.com/liquid-notes-music-software.html) does when you choose new chords, and to my ear it does a pretty good job.

The short answer is: it depends upon what you mean by making the notes in the melody "fit the new chord progression". You could put any chords with a melody; but it might sound very dissonant some or all of the time! And this would: no longer produce an effect similar to the original relationship between melody and harmony (if you have already composed chords to fit with your melody); no longer produce an effect which displays the usual characteristics of common-practice harmony.

The top line represents the simplest possible harmonisation for this melody, and certainly what one would consider to be the harmonisation most obviously suggested by the melody. But the use of an Ab Major chord throughout sounds good: very different but good. It gives the typical "horror-movie" effect of the "wrong" harmonisation of a such a simple children's melody. It works for a couple of reasons: the simple melody and use of only one major chord are both easily recognisable elements, even though they produce dissonance; there is still some recognisable relationship between the melody and harmony, the note C for instance is now the major third of the underlying chord, and the other notes (besides the E) all have a Lydian relationship with the underlying chord.

You could have chords below this unchanged melody that would be both more or less dissonant:

The longer answer is: if you want to have your melody retain a "traditional" relationship with the underlying chords (in other words retaining relationships characteristic of common-practice harmony) you will need to change elements of your melody as and when your chords stray from what would be considered a "comfortable" harmonisation.

In order to preserve the identity of your melodic material as far as possible, you should aim to:

Of course, this is easier said than done: and would require a bit of experimentation. It is almost certainly easier to do this on a case-by-case basis, rather than by creating an algorithm, but I like the sound of your challenge, and you may be able to produce rules that create melodic changes you are generally more happy than not, with.

Having pointed out the difficulties with these melodic adjustments, here are some approaches that might work, to produce traditional harmonic/melodic relationships:

As I see it, there is one other big choice that you should probably make: when changes are made to your melody, do you then continue your melody wholly changed in relationship to the one changed note (e.g. if a note is flattened by a semitone, do you continue with every other note "transposed" down by a semitone), or do you continue as you would have done, with just the one note changed? Again, this is likely to be dependent upon which of these will allow the most notes to "comfortably" fit with the underlying chord or chords.

Although your chord changes could be arbitrarily complex, let's stick with the melody and new chord from the example above, even though this represents a very simple case. (The original melody is harmonised with a single major chord and the new chord progression consists of a single major chord, too. So a trivial solution is to transpose the whole melody down a major third, to start on Ab.) If we take the Ab Major chord as our tonic chord (we may as well - it is the only chord!) we can adjust the pitches to be in Ab Major:

This works well; in particular, because the first two bars still have chord-tones in the same relative positions. The Gs in the third and fourth bars sound less good: they are not especially dissonant, but would sound better if they were adjusted to chord-tones - this suits these longer notes, as the melody comes to rest on them. Although neither of the following solutions (bars 3-4) are as effective as the original melody, they do work better for having the Ab chord-tone for the minims (personally I prefer the fourth bar):

The example above would sound okay with Ds instead of Dbs, too. This could be interpreted as Ab Lydian, or as being on chord IV of Eb Major.

But let's try a more difficult example. The chords below were chosen at random (not that interesting to know how, but it was fair!):

Okay, pretty weird chords - but that's a random choice for you! This works fairly well as an example though, because as it stands the melody certainly doesn't seem to fit well with the underlying chords.

At first glance, Bbm and Eb are fairly closely related (they could both be in the related keys/modes of Ab Major, Bb Dorian, F Natural Minor...), so we may be able to transpose our melody to fit better over these chords. Here are a couple of ways to change the melody to fit over the first two chords. Both retain (mostly) the position of chord-tones and non-chord-tones. The first retains the repetition of pitches bar-to-bar, but changes the intervals (and implies Eb7); the second retains the exact intervals, but uses a sequence for the second bar (i.e. the notes are transposed up a tone):

Both of these solutions have their merits, but trying these out with the next chord, I think the second will work better:

But how good does it sound? Well, to my ears, it sounds pretty bad. It might be the best solution possible, but not necessarily what I would compose if given a free choice of underlying harmony. In other words, the chord progression sounds a bit weird, like it doesn't quite work, and so it is no surprise that the altered melody sounds like this too...

A few closing comments: Here I've just given one simple example. But the possibilities are of course endless (quicker changes of chord; different chord types/extensions; more complex melodic lines). And this is the essential problem: here I've come up with just one "bespoke" solution for one melody and set of chords - this has involved a certain amount of reasoning about the melodic and harmonic materials involved. As these will inevitably be different in each case, I'm not sure whether an algorithmic solution will be possible. And if it is, it won't be easy to find!

Lastly, if you haven't already, you need to make sure you have a good understanding of common-practice harmony and how to approach harmonisation and reharmonisation of melodies (essentially what you are doing is very closely related, even though it may seem like the opposite). Also, reading up on fugal technique, particularly about how real and tonal answers are adjusted to fit different harmonies and key centres, may be of use.

In my other answer, here, I suggest ways in which a given melody could be adapted to "fit" a different chord sequence. This approach is likely to feel contrived and yield unsatisfactory results though, particularly where the new chord sequence has very different horizontal relationships to the original chord sequence.

So, I thought it might it might be useful to approach this process from the opposite viewpoint, in order to suggest why such an approach is likely to be ineffective, rather than looking at how such a process might be achieved.

An unaccompanied melodic line will usually imply one or more harmonic accompaniments. How closely a melody is tied to a specific implied harmony will depend upon a number of factors:

Even if a melody remains within a single key or mode, it is likely to comfortably fit with a particular series of chords drawn from this key or mode and not just any chords from this key or mode. Even if new chords are selected only from the same key or mode, this is not likely to harmonise the melody well without adjustments. And these adjustments may well cause the melody to function less effectively. Put quite simply, a given melody which sounds "good" is likely to work because it also implies a coherent chord sequence, with coherent phrasing and cadential points.

It is true that a given melody can usually be reharmonised in a number of ways. However, any chord progression that effectively reharmonises a given melody will not simply be any arbitrary series of chords, but will be related to the initial harmony in some way:

Melodic lines using fewer pitches are likely to be more conducive to being reharmonised easily, as they are likely to less strongly imply just one specific chord at a time. The following three note melody is a good example: 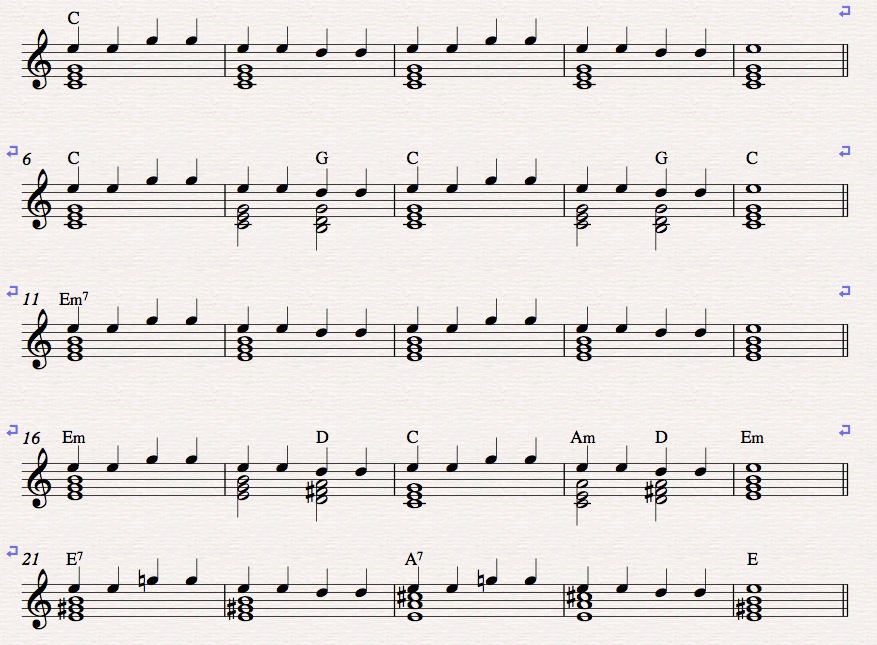 (Okay, these are only simple reharmonisations, which don't harmonise many of the melody notes as non-chord tones or with any extended chords...) The following example shows both: how easily one can reharmonise an even simpler melody (just one note!); how one can use extended/altered chords to provide more options by making more chord-tones available:

Because the melody above consists of just a single pitch, it doesn't strongly imply a particular chord progression; it could allow a whole range of different harmonisations easily. Crucially though, the chords here still have a self-contained coherence, largely provided by the descending chromatic root notes - they are not arbitrary.

Whether a given melody strongly implies a certain harmonisation or not, there are always likely to be a limited number of harmonic progressions that fit well with it. For this reason, if an arbitrary series of chords are chosen to harmonise a given melody, it is likely that significant changes will need to be made to the melody, and these may significantly affect the character of the melody. This is particularly likely to be the case where an arbitrary chord progression lacks its own coherence (provided by, for instance: common key/mode; established cadential patterns).

Even where a chosen chord progression does have its own self-contained coherence (it works as a chord sequence on its own), significant changes may need to be made to a melody in order that it fits with such a chord sequence. In some cases this may be achievable by only making a few changes to the melody, so that it strongly retains its character, but in other cases the melody may no longer work well, as it moves too far from its original phrasing, contour and harmonic function of each of its notes.

If one is not concerned with trying to stick as as closely possible to the original melody, this process would be more effective: in this case one could choose shorter elements from the original melody to be used with the new harmonic accompaniment, be these: short figurations, motives or even particular intervals. This is, after all, a well-used compositional technique, be it in a Baroque fugue, a Wagner opera, a serial composition, or any other compositional work built upon internal motivic relationships. In this case, the success of such an approach is likely to be based as much upon the effectiveness/coherence of the chosen harmonic structure (chord sequence), than on how one then uses melodic fragments with it.

Not the answer you're looking for? Browse other questions tagged composition algorithmic-composition or ask your own question.