Same note to be played with both hands? [duplicate]

Why some notes in the piano are written the same for the left and right hand ?

What is the purpose of this ? And how do we play them ?

Do we just choose one hand to play them or do we play them really in both hands which is pretty hard and not comfortable ? Here is an example of what I'm talking about See the last two notes Si Si are both wrote in the left and right hand . 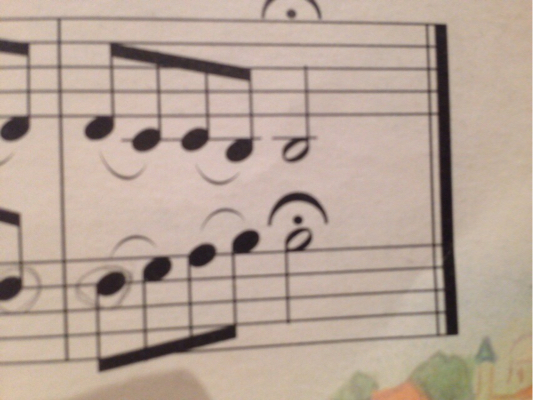 As I've mentioned in my comments, a rest could be substituted for one of the notes in a unison, but your understanding of that line's phrasing would change, and hence your presentation of the phrasing might very well change as well (for example, by shortening the last note before the rest so that it doesn't give the impression of meeting the other line in a unison).

It is no means unusual that one of the notes in a unison may have a shorter note value than the other. This may be dictated by motivic or thematic requirements. I'll give an example from J. J. Froberger's Ricercar I (FbWV 401).

In this excerpt, the first bar-and-a-half conclude the previous section, and a new one starts at the end of m.87 with a statement of the ricercar's subject (in blue) matched with a short second subject/motif (in green). Momentary unisons are marked red. The first one is a bit unusual in that the entries of the unison are staggered. You would normally play this unison as a crochet before the bar line, followed by a dotted minim after the bar line. (On an organ, it would be hypothetically possible to play both voices separately on different manuals, although I doubt a performer would - the inner voices shift between hands, and there isn't really any tidy spot to bring both hands back together on the same manual.)

The second unison is pretty straightforward: you would hold the F for the complete measure.

But you should be able to see why Froberger wrote it this way: the individual voices make sense as written, and you want to try to give an impression of those lines as written, even though you will need to fake it a bit.

Just play them with one hand. The reason for writing this is so you can clearly see where both lines go.

Another reason for notating the same note on both hands is that while both notes would represent the same key on a piano keyboard, it's possible the piece of music might be performed on something other than a solo piano. Some keyboard instruments such as organs and harpsichords are constructed with more than one manual (keyboard), and some musicians stack synthesizer keyboards so as to allow two keyboards to be played simultaneously (using one hand for each). Additionally, one or more of the parts on a piano score may sometimes be played by other instruments in addition to or instead of the piano. Even if a piano would not be able to play the B3 in the right hand and left hand as separate notes, writing the note in both parts lets those who play instruments that could perform both notes simultaneously know that they should do so.

Actually, I think the main reason for this is simply due to proper notation of the voices, rather than having to do with which hand plays the note. To elaborate, both notes rest on the same physical key on the keyboard, however it is meant to convey to the performer that the lower voice and upper voice both cadence on B.

I really don't believe this was done to a) encourage either hand to play it or b) easier to read.

My answer is obviously in agreement with Patrx2's comments.

There are probably a couple reasons.

I'm accustomed to re-instrumenting pieces, and that unison would behave differently from the rest under the obvious re-instrumenting. Start thinking two horns rather than two hands and it suddenly becomes clear. (When playing this piece as horns, we'd have to deduce the bass clef melody line and drop the other notes from chords.)

This question becomes very interesting when you start looking at articulation.

It is very nice to articulate a fugue subject so that it is more recognizable every time it occurs. The subject of the first fugue of the Toccatta in D Minor (BWV 913) begs to have the first note a tiny bit stacatto. "Deet Dah--- Dah -dah- dah- dah- dah ..." But some entries of the subject overlap the first note in unison, making it impossible to shorten the note, as the same note is already playing in another voice. The unison overlaps in this fugue are all over the place, I hadn't really seen this many before, which may be because it was composed on the organ.

This made me think that it was meant to be played on two manuals. But it's not! Christine Schornsheim plays it in a Youtube video, and she plays everything on the lower manual. The overlaps have nothing to do with playing on different manuals. I would bet that people who play this on the organ play everything on one manual as well.

Since seemingly all of Bach's music is didactic, then I would say as keyboard players we need to master this technique of unison playing or quickly repeating a note with a different finger so that we can bring out the phrasing as it was intended.

8
Piano both hands, different forces exercises
1
Left and right hand playing same note on piano?
10
Which hands to use for Für Elise by Beethoven?
7
Improvising a Solo with Both Hands
4
What is a correct sequence of notes in Chopin Prelude in F# Minor, Op. 28 No. 8, played slowly, both hands?
14
Piano scales: Why bother with hands together?
5
How to play a note with different length with both hands?