Why is the 3rd omitted from common G Maj 7 shapes in guitar?

But most G Maj 7 stuff i see does not have the third. Mainly because keeping a third(2nd fret, 5th string, standard tuning) results in a difficult to hold shape. My question is, Can you omit thirds like this in other cases as well ?

EDIT: This is a screenshot from youtube. some help with the major 3rd here ? 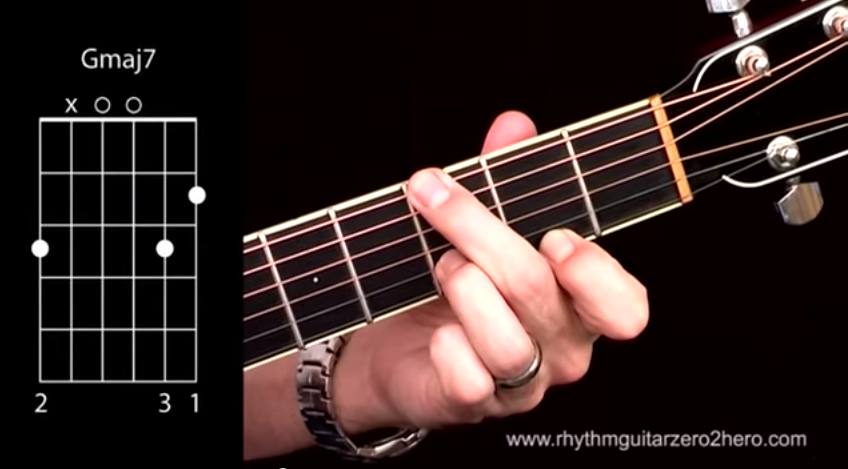 Are you sure that the 3rd is omitted? It's really rare to omit the 3rd, because it really signifies the quality of the chord (major or minor). Usually, when people want to omit a note in a 7th chord, they omit the 5th.

From what I've seen on guitar, they omit the 5th or none at all

Εdit: From your image, I can see that he is playing twice the 5th (D). One time as an open string, and one as the 3rd fret on the B string. I don't see any point in doubling the 5th and omitting the 3rd, when you can play both, simply by playing the B string open (which is the 3rd of the chord).

This seems wrong to me.

Here is a way you can play it, without omitting any note: 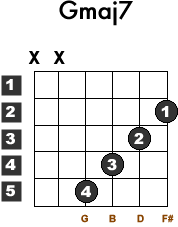 And I've also found some other ways to play the chord:

A normal Gmaj7 chord would not omit the third; indeed, it would commonly be played on six strings with the root doubled, the third doubled, and the fifth and major seventh appearing once each, albeit in different octaves.

There is more to arranging guitar tabs (at least good ones) than simply looking up chords and copying the diagrams. A chord fingered as shown would be usable as a Gmag7 (even if it's technically a G5addM7) but would have a different sound which might be better than the normal one in some cases.

When there is NO MAJOR THIRD, a chord cannot be a major 7th. It may have the maj 7th note (In this case F#) but without the maj 3 it won't be a maj7 chord. The maj 3 part makes it a maj. chord.

In a song of mine I chose to use a version of a A7 without the third. For simplicity I called it an A7 in the chord progression, but felt it important to write a note on the sheet saying that it technically might be called an A5add7.

In the same song there’s also a G5 chord where I eventually started using an F♯ note in passing. I had to hear what the progression sounded like using just the G5 or using a "G5add_maj7" in order to decide what I wanted to consider the chord to be. I settled on continuing to call it a G5.

Guitar chords very often omit parts of a chord for convenience sake, often even important parts. Omitting the 3rd in G chords is probably the most common. For instance, 3X0033 is a common way to play G (I would argue it is a major chord even without the 3rd, when in the context of the song as a whole) since it lends itself to easy transitions to its dominant and subdominant: X32033 and XX0233. Note these are not "perfect" ways of playing these chords (C9 and Dsus), but are easy for people to play in a chord progression. With this influence, I can see how someone would think of a quick way to play Gmaj7 would be the fingering you've provided.

Shevliaskovic and Tim are correct that it is really better to have a third, but I believe this is why people do it.

Not the answer you're looking for? Browse other questions tagged guitar theory or ask your own question.

13
Guitar scales further up the fret board
8
Is it OK to play guitar with capo on 5th fret, since I have arthritis in thumb & finger joints?
2
whats the triad formed root +maj 3rd +maj 2nd called?
4
Are there geometric symmetries in musical harmonics?
3
Am I correctly approaching the relationship between string bending and action height?
0
How to find to the right strings of a barre chord by feel?
3
Describe a chord shape?
3
G-D-A naming convention
3
Electric guitar tuning changes in different holding positions