I was reading this article:

And partway down, it states:

An intonation adjustment is usually only necessary when different gauge strings are fitted (it can also be affected by the angle of a tremolo unit).

What are the "standard" gauge strings for a guitar, and why would someone want to change them?

String sets are labeled according to the gauge of the strings.

When we say a "set of 10s" we mean a set of strings in which the highest string, the high "E" string, has a diameter of 0.0100 inch (or 0.254mm). The other five strings, of course, have progressively larger diameters, calibrated to provide proper string tension at the pitches to which the guitar is tuned in standard tuning. 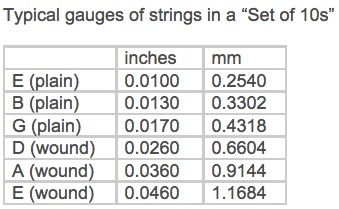 There really is no such thing as a "standard" gauge of string. What gauge of string you would choose depends on whether you are playing an acoustic guitar, a nylon-stringed classical guitar, or an electric guitar. From that point it depends upon your preferred style of playing.

You should select the gauge of string that works best for you, and then you should pay a guitar technician to do a setup on your guitar to optimize it to play in tune according to the gauge you select. From that point on, when the strings wear out, you should replace them with the exact same gauge of strings you selected for the setup. If you change to a different gauge in the future, your guitar may require another setup to re-calibrate it for different gauges of strings.

Your guitar came from the store with a particular gauge of strings on it, and the guitar was set up and calibrated for that set. You should know exactly what gauge of strings the guitar came with; it is the starting point from which you would decide whether or not you wish to continue to use that gauge or whether you would like to switch to a heavier or lighter one. If you don't know what that gauge is, any guitar technician can measure the thickness of the strings on your guitar and tell you.

As to why certain players would want heavier or lighter strings:

With regard to electric guitars, it is not so clear-cut, because the amplification process makes up for the weakness of the sound of thinner strings. Some players prefer heavier gauge strings because they believe they produce a stronger, more robust tone, and also because heavier gauge strings are good for heavy strumming without having them easily go out of tune. Some players prefer lighter-gauge strings because they are less fatiguing to play, and it is easier to bend strings with the fretting hand to inflect the pitch or introduce vibrato.

But it all depends on the preference of the player, and the guitar can be calibrated to accommodate the player's preference.

As an example, the great Texas blues guitarist Stevie Ray Vaughan used 13s on his electric guitar. In the modern era we consider 13s to be extremely heavy. But Vaughan managed to do a lot of string-bending. This required a great deal of strength in the fingers, and constant practice to keep the fingers strong and to build up and maintain thick calluses on the fingertips.

Jimmy Page of Led Zeppelin, and Billy Gibbons of Z. Z. Top are known for using a set of 08s on their electric guitars. This gauge is "ultra-light". Most guitarists would not prefer 08s because the strings are so delicate that they would break very easily, they would go out of tune quickly, and they would have to be replaced often. Simply putting too much pressure with the fretting-hand finger-tips on such thin strings could cause intonation problems. But Page and Gibbons have developed their particular techniques so that 08s are perfect for them.

If you want to learn all about guitar string gauges, I would refer you to the D'Adarrio string company website. They explain everything about each of their products in great detail with full measurements.

Back in the early '60s, there was only a 'standard' set available, so take it or leave it. Then guitarists started using banjo strings, and putting a 2nd in place of a 3rd, etc. Since then, string makers have given us a huge choice in gauges. 'Standard' most likely means a set of .010s,which seems to be what a lot of manufacturers put on new, but some players prefer a beefier sound, so may go for .011s or .012s. Others, myself included, like .008s, which bend far better, have a more treble sound, and suit my style. There are also now hybrid sets, which come with, say, a thinner top 3 and heavier bottom 3. My own have been hybrid for many, many years, so I tend to but 10 of each gauge at a time. More expensive, but they do the job for me!

The intonation will need tweaking when a different gauge of strings is put on, as it is affected by the density/thickness of the strings. That said, a lot of new guitars need setting up out of the box - if only to match the playing of the proud new owner.

Not the answer you're looking for? Browse other questions tagged guitar string-gauge or ask your own question.

4
What string gauge should I use for my 7th string on a guitar
3
Adjust left / right angle of guitar neck?
8
Upgrading from 0.009 to 0.010 string gauge. Do I have to do a guitar setup?
3
Optimal string gauge for beginner electric guitar
3
String gauge for playing on Drop G# on a 25.5 scale 7 string guitar
6
Can I use one string gauge for standard D and drop B tuning?
1
Thicker string gauge
2
guitar, six string, steel strings, what gauge will provide noticeably lighter action?
3
What is the correct string gauge for an Alvarez LJ2E acoustic guitar?