How to get raw signal from a divided or hexaphonic pickup

I have been looking for a way to get a truly divided signal from each string on an electric guitar.

The problem is I don't want the signal to be in a midi format because midi throws away a lot of useful information in the signal.

I'm looking into getting a guitar with a divided pickup (like the Roland GK-3), also known as a hexaphonic pickup, and I was wondering if there was any way to get the "raw" (non-midi) signal from a pickup like this while keeping the signal divided.

I would prefer a solution that doesn't require cutting into any wires or hacking together some circuitry myself ... because lets face it, this thing is expensive.

Is this possible? (please note: it doesn't have to be with a Roland GK-3).

Anything that will get me the result I'm looking for would be acceptable.

It has been done, in several different pickup designs. These are called hexaphonic pickups, meaning "six separate sounds" or six audio signals, one for each string by itself.

There were a couple of commercial products offered in the last ten years or so by Gibson Guitars and Keith McMillen Instruments that did exactly what you are looking for, but they are no longer being sold. See below.

You can purchase hexaphonic pickup systems from Fishman and Graph Tech that might be capable of being wired up according to your idea. These systems are in the form of six separate piezoelectric pickups installed within an electric guitar bridge -- with a separate pickup under each of the six independent bridge saddles. The Fishman PowerBridge offers this, as does the Graph Tech Ghost system. Each of these require purchasing a bridge-and saddle assembly, and wiring each of the six separate bridge piezo pickups into an internal or external six-channel preamplifier. (These kinds of pickups also are "Roland-compatible" and can use the Roland DIN-13 output jack like the Roland GK-3 you mentioned.) 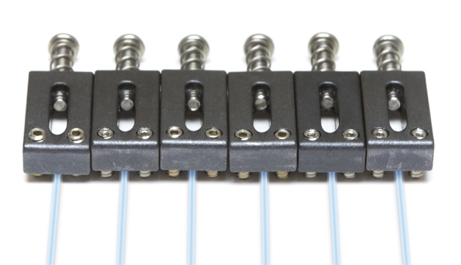 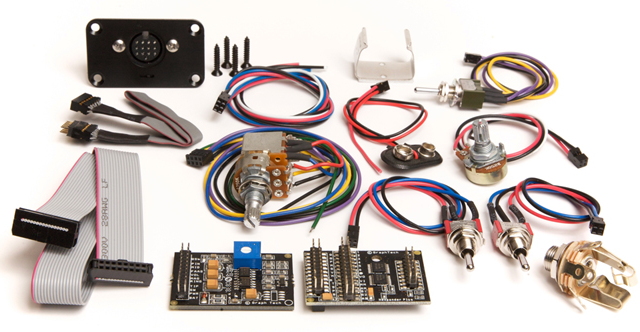 The Keith McMillen company used to market the StringPort, a six-channel preamp and analog-to-digital converter that could accept the "Roland-ready" DIN-13 pin output from a hexaphonic piezoelectric bridge pickup, convert all six discreet channels of analog signal into digital audio, and send them all to a DAW in a computer for processing or recording each string's signal on its own separate track. But this product is no longer offered.

Gibson also used to make a Les Paul guitar with a hexaphonic piezoelectric bridge pickup and similar capability, sold with an outboard preamplifier and an external interface box with six separate analog audio output channels. One model was called the Dusk Tiger; the original model in the line was called the "Gibson Robot Guitar". [Note that Gibson has used confusing nomenclature: more recent Gibson instruments called "Robot Guitar" refer to guitars equipped only with an automatic string-tuning system, and not with the original hexaphonic audio output system.] 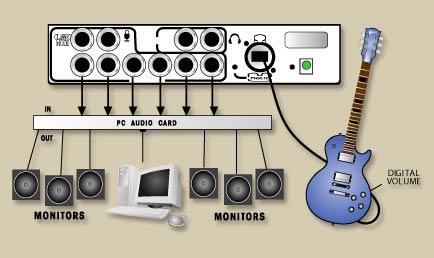 Brian Moore Guitars make electric guitars that come from the factory with a hexaphonic piezoelectric bridge pickup, and a Roland DIN-13 connector installed internally. I don't know if Brian Moore is using Fishman, Graph Tech, L. R. Baggs or RMC piezo bridge pickups these days, but they should all work about the same. If you had a Brian Moore guitar you'd still need a hexaphonic preamplifier with six audio outputs to plug it into.

Note however that all of the systems described above use piezo-electric pickups, the same kind of pickup used in under-saddle bridges for acoustic guitars. Therefore the sound these pickups produce is of the "acoustic" variety. You would have to use a lot of signal processing to try to make these pickups sound like a conventional magnetic pickup on a conventional electric guitar. You would have to have six separate channels of signal processing (e.g. six separate distortion boxes), whether in the analog or the digital domains.

It would be possible to build six single-string pickups using conventional passive electric guitar single-coil pickup technology, which means winding thousands of windings of hair-thin copper cable around a permanent magnet, but this would be awkward to create. I remember reading about just such inventions back in the crazy days of the 1970s -- there were some prototypes made, but they were never mass-produced and never became popular.

In particular, the Hamer company made such a design for bass guitars, using four separate magnetic pickups, one for each course of string. This would have been easier than a similar design for a guitar, because on the bass the strings are farther apart and there would be more room for those large magnetic coil pickups. 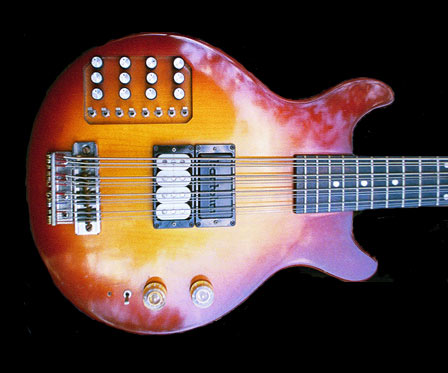 Note the built-in four-channel "mixing board", leading to four separate outputs, one for each string

In the mid-1980s the Kramer guitar company made some guitars called the Ripley line that had hexaphonic pickups that mixed down into a two-channel, stereo output, with a pan-pot for each string. I'm not sure if these were all piezoelectric designs or if there were magnetic pickups involved as well. You can read about them here.

After a Google search I found a one-man company that sells a more conventional magnetic hexaphonic pickup for electric guitars. The company is called Ubertar Hexaphonic Guitar Pickups. I know nothing about them or their products.

UPDATE TO THE UPDATE

Much to my astonishment I found a current product that does exactly what you want (assuming it is indeed still being manufactured). It's the RMC Pickup Fanout Box. RMC Pickups has been around for many years. You ought to be able to plug any guitar with a piezoelectric hexaphonic bridge pickup and a Roland-Ready DIN-13 pin output into this device. (RMC sells piezoelectric hexaphonic bridge pickups, though these days it seems their kits are only for acoustic guitars, not electric. Have a look around their website.)

Not the answer you're looking for? Browse other questions tagged electric-guitar midi pick-ups transducer or ask your own question.

4
Are there guitar/pickup/effect setups for “ganged” distortion?