Is this type of sound wave possible (Picture)

I apologize in advance if this is off topic for your stack. I saw this picture of a sound wave on a website. I have never seen a design like this for a sound wave. I am under the impression that this is a recording as this site does art from recording voices. I always thought the lines would always start from the middle line and go out. Are sound wave recordings always symmetrical? 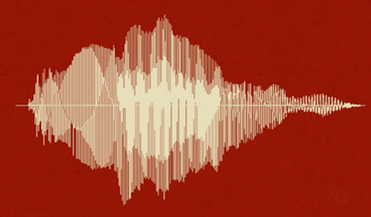 Part of what I don't understand is how there are dense areas that are not coming from the center. See circled areas.

I am comparing this to a sound file I recorded with Audacity. 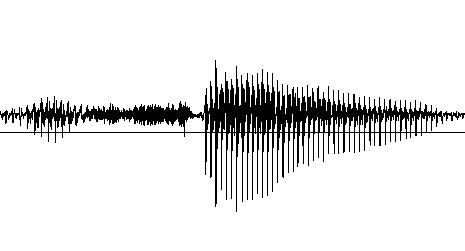 This file is a screenshot from audacity, and then turned B&W and leveled to make 2 colors.

An additional question: Do all audio editing programs display the sound wave the same?

If you were to zoom in much closer on the time axis, each "line" as you call it would become one (or more) peaks or troughs of the wave. As you probably know, the amplitude of these lobes represent the positive and negative variation in air pressure that transmits the sound. They are roughly centered around the central axis, but there is no need for them to be perfectly symmetrical. In fact, it's almost impossible to see a perfectly symmetrical waveform. There are a couple factors that contribute to this.

Secondly, and more importantly, is a mathematical effect called interference. Whenever you hear a sound, you are usually hearing more than one frequency at a time. For harmonic sounds like musical instruments, this will mostly be limited to harmonic overtones. For unpitched sounds like drums, or complex sounds like speech, there will be a complicated array of a possibly infinite number of frequencies. These waves have varying frequencies and amplitudes, and interact with each other in complex, hard to predict ways. Where two waves happen to have a coincident peak (or trough) -- called being "in phase", they will add together to make that peak stand out more. OTOH, if two waves are "out of phase" (one's peak aligns with the other's trough) they cancel each other out. Depending on which peaks and troughs are aligned, this can make the waveform appear taller on one side or the other.

As a side note, there's also a fair amount of graphical aliasing going on, from squeezing more peaks and troughs into a region then there are pixels to represent them. This is why I say that you'd have to zoom in on the original soundwave (just zooming in on the picture won't work, because that level of detail is already gone).

The areas you circled are caused by drawing the waveform at a lower resolution (pixels per inch) than the sound (samples per second). If the x-axis had a pixel for every sample then it would not look like it does. The patterns are not in the waveform, they are just optical illusions.

Every program I have encountered draws the wave form in a similar fashion: linear amplitude on the y-axis and time on the x-axis. There is a great deal of variation in the details, however. For example Logic Pro X fills in a silhouette of the waveform when you zoom out to avoid these types of aliasing effects.

There's a DC offset, which displaces the whole waveform above the datum line. This is easy to correct, and probably should be.

It also shows an asymmetrical waveform. Very common, and nothing to worry about.

Not the answer you're looking for? Browse other questions tagged sound audacity or ask your own question.

2
How to produce the sound at the beginning of this song?
1
How does the type of wood used to make an acoustic guitar affect its sound?
1
How would this woodwind's shape affect its sound?
1
Electric guitar buzzing sound electricity
2
Recording Sound Through Casio Keyboard Using Audacity
2
Sound Quality on Violin