Why is the double bass the only instrument in the violin family tuned in fourths?

Out of the 4 instruments of the Violin Family (Violin, Viola, Cello, Double Bass), the bass is the only instrument tuned in fourths.

The double bass is generally tuned in fourths, in contrast to other members of the orchestral string family, which are tuned in fifths.

Why is it so, when the other three are tuned in fifths?

It is because the double bass, essentially, comes from a different family of instruments than the cello, viola and violin.

This is a controversial assertion among music historians, as these things evolved continously, but many scholars do not consider the double-bass to be a part of the violin family at all.

About two centuries before the violin, viola and cello were invented, there was the viola da gamba family: the violone (the double-bass viol), the viola da gamba, the tenor viol, and the treble viol. These instruments came into prominence in the late 1400s, after originating in Spain. These were instruments of six strings, tuned in fourths, like the modern guitar. (and they had frets, too.) 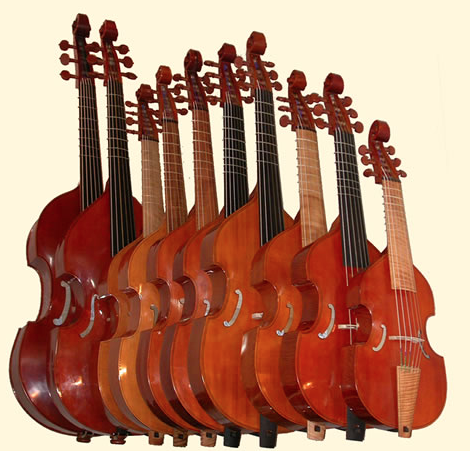 Instruments of the viol or viola da gamba family, from the violone on the left to the treble viol on the right.

Violin-family instruments have four strings tuned in fifths. They also have structural differences which give them a much stronger, louder sound than the relatively quiet viola da gamba family instruments. Once the newly-designed violin, viola and cello came on the scene, the viola da gamba family fell out of usage, because they could not compete with the loud, cutting sound of the violin, viola and cello.

Since there was not originally a bass member of the violin, viola and cello family, luthiers adapted the existing design of the violone (the bass viol, six strings tuned in fourths) to make it better able to accompany the new violin-family instruments.

Along the way the violone became longer in scale length, to increase string tension, tone and projection, and it lost its two highest strings. It also lost its frets. This became the modern double-bass. The structure and design of the modern double-bass still has more in common with the earlier viola da gamba than with the cello -- even if, superficially, they look similar.

The Wikipedia article on the history of the cello explains the relationship of the older, lower-pitched Spanish violone (tuned in fourths) to the younger Italian cello (tuned in fifths).

With long open strings, the span to reach notes especially at the nut end would be too much for a lot of players if it retained the 5ths pattern of tuning. Making the tuning in fourths means that the left hand can encompass three notes in a scale and then move across to the next string in the same hand position. That said, it's not difficult to slide up a couple of inches, but accuracy is compromised when this happens.

Here is a video by Adam Neely that briefly says the history of Double Bass and its tuning, stating the same:

I can think of two reasons:

One could also argue that the bass doesn't “need” such a wide range as cello and violin. But I'd say, why not? Violin and cello also don't really need such a wide range, they just happen to have it. And the viola clichee-wise uses an even narrower range than the bass, despite its fifths tuning...

The early history (from about 1500 to 1850) of bass tunings are very variable, with anything from 3 to 6 strings and tunings in anything from thirds to fifths. Reference.

In the classical period, the virtuoso Domenico Dragonetti played a 3-string bass tuned C G D an octave below the cello, which was more or less the standard instrument that Haydn, Mozart and Beethoven wrote for.

The current "standard" (E A D G tuning with a string extension down to low C) is a relatively modern invention.

The reason for tuning an instrument a certain way is always for playability reasons (and instrument construction/design/purpose). One could certainly make the argument that a particular instrument belongs to a certain family but it doesn't fully answer the question- the same question still applies- why does that family get tuned a certain way. "Just because" isn't an answer.

I often tune my guitar to standard tuning (E A D G B E) and sometimes curious students ask why. I don't know who invented this tuning but we can make observations.

So why might a bass instrument tune in fourths instead of fifths? First we need to understand the reason for multiple strings in the first place. If I have only one string (a bass string for example) I can only move lengthwise up and down that string. Moving from root to fifth or root to fourth is a fairly large distance and requires some energy in hand movement. If I now add a string next to it, tuning the string to the same note gives me no advantage fingering wise. Let's say I decide to tune that next string to a fifth higher. This creates a situation where the next string is simply a continuation of the original string but starting at the fifth. This means less hand energy is needed to play from the root to the fifth. I simply move a shorter distance to the next string. This is analogous to teleportation. In open position I don't even need to use the left hand, just the right. However if I also need a fourth I still need to move up that E string to get the A. Considering that our key system is based on I, IV and V, tuning a fifth isn't so great. Tuning the two strings to fourths gives me those three notes within a short distance of each other. I can move from root to fourth very easily and now the fifth is just little further away. This will be mirrored in every position on every string. This is desirable for any instrument expected to play bass notes. This is the same reason a guitar tunes its bass strings in fourths normally.

When you begin to shorten the scale length and expect your instrument to mainly play melodies this distance from root to fourth becomes less of an issue technically.

Lastly, six string electric basses usually tune all in fourths. The reason is the same as above and also because playing chords like a guitar isn't that great- the instrument is big and those low notes can get muddy quickly. In that case symmetrical fingerings are preferable.

It was common in the French Schools of the 19th century to tune in fifths. At that time the German and English bassists were switching to fourths. It was noted that the German and English bassists didn't need to work as hard as their French counterparts. The French were reluctant to leave fifths as they felt fifths tuned basses blended better with the cellos violas and violins as their harmonic series was similar. I don't know what time the switch was made. Here is an American bass method book from 1891 that is for three string basses tuned low to high, C, G, D. http://imslp.org/wiki/Method_for_the_3-String_Double_Bass_(Fischer,_Carl) I have strung my bass CGDA an octave lower than cello. I love it! Also check out Joel Quarington's website to learn more about fifths tuned contract bass. http://joelquarrington.com/

The bass waltzes composed by Dragonetti have a lot of paired notes that go from 1st to 4th finger across strings to minimize shifting. The same can be said for the 6 Vivaldi sonatas and Benedetto Marcello sonatas. It seems that composers in that period took into account the tuning in 4ths and made pieces that fascilitated the playing to bassists. (I'm aware Dragonetti played a 3 string bass, But I believe the tuning was still in fourths.) The pieces in question would have been annoying difficult to play at speed if the bass were tuned to 5ths. I'm not a really experianced bassist, but that it how the pieces seem to be structured. I might be totally wrong, but this is how I see it.

It seems the Spanish decided the fourth tuning best suited their guitar that was an instrument that mainly provided chords to backup dancing or singing. Playing the chord positions on the double bass would be more difficult on an instrument tuned in fifths. The Italians had a different point of view.

Not the answer you're looking for? Browse other questions tagged tuning history double-bass violin-family or ask your own question.

152
Why is the guitar tuned like it is?
8
How do I change the strings on a double bass?
12
What frequencies should the violin and viola be tuned to?
10
Why are bass guitars so much shorter than a double bass?
2
How to notate fingerings on chords/double stops?
12
As there's a "double" bass, is there such a thing as a "single" bass?
3
Do any prominent string players tune the top and bottom string to be a just minor 10th or major 13th?
7
Why are double stops rarely written for double basses, compared to other strings?
6
Are there any violin family instruments built without a left shoulder?