Do you need anything beside the BPM and number of beats per measure to specify a rhythm?

Again I do some calculations to put clarity in my question Say BPM = 120 so beat time is 0.5 seconds Now in 4/4 the quarter note duration is 0.5 seconds

If that is so the lower number in time signature is really redundant. For every rhythm you just have a reference note having duration equal to beat time.And all other notes can be defined in terms of this reference note. You can keep all your symbols same but the symbol for quarter note is now called reference note , Half note as 2 Reference note(2 times in duration) Eighth note as 1/2 Reference note etc

Main point is that(It seems to me) you really need only two numbers to specify a rhythm.

BPM and the number of beats in a measure. Do you really need anything else?

Yes. The bottom number indicates the reference symbol used to measure the unit pulse. Therefore, half-notes are played at 120bpm. As others have suggested, almost zero musicians think of notes as durations of fractions of a second.

If that is so the lower number in time signature is really redundant. For every rhythm you just have a reference note having duration equal to beat time. And all other notes can be defined in terms of this reference note.

You are in part correct, and there are some composers would agree with you. For example, George Crumb: 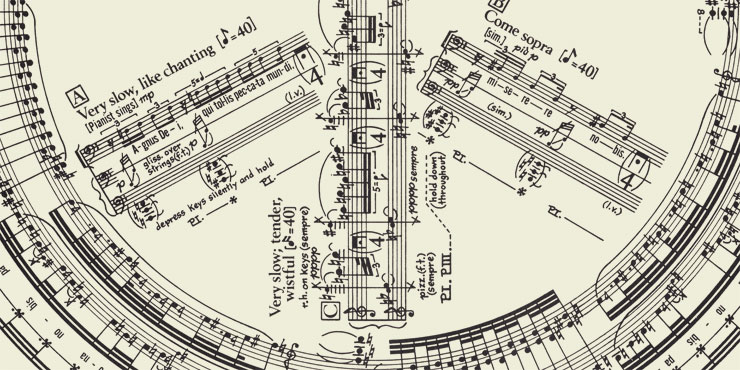 You can see in the score that Crumb dispenses with time signatures completely, instead favoring a marked unit reference and a BPM. For this music, which is poly-temporal, time signatures are useless because different musicians are playing at different tempi.

Do you really need anything else?

Like many aspects of music theory, your stance that certain elements of time signatures are redundant holds up with certain types of music, but not others. For example:

In this image, taken from Crippled Symmetry by Morton Feldman, both numbers of the time signature are necessary because each instrument operates within their own metrical language. Because sound - and by extension - time are measured differently for each instrument, it is not possible to simply ascribe them all to the same pulse / unit beat and call it good. Each instrument is independent, and the music needs to reflect that.

Historically, BPM's were not used as a means of measuring music until the early part of the 19th century, 1816, upon the suggestion of Beethoven, who was one of the first composers to include the markings in his scores.

Broadening horizons, it's also important to note that not all music is measured with BPM, for example, non-Western European musics of Africa and India. In these cultures, especially the folk music, BPM's would be wholly irrelevant as the pulse and pulse-groupings shift constantly during a single piece.

As a last thought, many conductors, when marking scores, do not even use numbers. Since they think gesturally, conductors often use triangles for triple meters and lines and squares to mark duple and quadruple meters.

The lower number ties the beat length to a particular musical symbol. N/2 indicates so many minims (half notes) to the bar, N/4 = so many crotchets (quarter notes), N/8 = so many quavers (eighth notes).

One reason for using a particular note length versus another is purely for convenient notation. e.g in compound time signatures like 6/8, 9/8, etc groups of 3 quavers clearly show the subdivision of the bar whereas in 6/4 or 9/4, because crotchets are not beamed, the music would be harder to read.

While mathematically it indeed seems that way, 4/4 and 2/2 are not the same thing, just like 3/4 and 6/8 aren't. Technically, you can perfectly write a 4/4 piece down using a 2/2 time signature, but there are different nuances to each of these time signatures, which make them quite an important bit of information.

I suggest you read the answer to this question: Does 3/4 time signature differ from 6/8? The question carries the same sentiment as yours, and the answer will show you that, indeed, both numbers in the time signature are important pieces of information.

I think the confusion here is mixing two different conventions. The notion of "BPM" arose from tempo indications in MIDI sequencing, in music genres where staff notation isn't used at all, or is not very important. If you want to relate MIDI tempo to staff notation, the standard (defined in the Standard Midi File Format specification) is that "beat" = "quarter note" by definition, whatever the time signature. There are other ways to define tempo in MIDI files which are not related to musical "beats" at all - for example by counting the frames of a video, or simply by giving the time for each event in microseconds after the start.

On the other hand, in conventional staff notation, ever since the invention of the metronome (in 1815) tempo marks have been given as "symbol for a note duration = number" (number meaning "number per minute"), and the symbol is chosen to correspond to the time signature of the music. So the tempo of a piece in 2/2 time usually would be shown as "half-note-symbol = whatever" and a piece in 6/8 as "dotted-quarter-note-symbol = whatever".

As a practical consideration, the note symbol might not correspond to the "beat length" of the time signature if the tempo is very slow or very fast. The original mechanical metronomes only worked reliably over a range of about 40 to 200 ticks per minute, so a very slow piece in 4/4 time would usually be marked "eighth note = 72" not "quarter note = 36" for example, even if there were "four beats in the bar".

You're too hung up on the idea of measuring note durations in seconds. We don't really do this (okay, maybe some electronic music producers do, but not the vast majority of musicians). We have, as the primary indications of rhythm, the type of note getting the beat and the number of beats per measure. You can then take this framework and apply a ([note type]=[BPM number]) tempo to get an exact speed, but the time signature is independent of this, and this is a good thing. It allows us to vary the tempo, for stylistic purposes or for practice.

The 3-part tempo marking system gives a lot of useful information to the performer. Generally, you have a tempo marking (130bpm or allegro), an upper number specifying the number of beats in the measure, and a lower number designating which note gets the beat. Sure, quarter note = 130 is sufficient. But at that point why use barlines at all? I would argue that we don't even NEED measures to convey musical ideas - the stress is often implied in the score itself.

Humans don't play exactly based on clock time. Machines can, but often the speed of a piece is based on all kinds of factors - especially the pulse of the conductor!

As you can see, a sufficiently descriptive tempo marking is really all you need - look at chant, which seems to get along quite well with only mensuration symbols.

You are right that 4/2 at 120BPM will sound the same as 4/4 at 120 BPM. As Noel Waters alluded, the choice between 4/2, 4/4, 4/8, and even 4/64 is a matter of simplifying the notation as much as possible. The process of moving from one to another is called rhythmic augmentation or diminution.

3
In simple terms, how would you describe Rhythm and Melody
7
When transcribing a song and the speed doubles or halves, is it best to change the tempo and note values to reflect that or keep them the same?
22
Relationship between 3/4 and 4/4
5
Are whole notes/rests really used to signify variable lengths of time?
4
A question about quarter notes
3
Tempo and Rhythm
3
BPM, beat durations vs frequency