What's the difference between arpeggio and broken chord?

A broken chord is just as it sounds: a chord that is broken up in some way, shape, or form where you are not playing the the full chord at once.

An arpeggio is a specific way of playing a broken chord that has a defined texture to it. While the definition is not a very strict, it is typically characterized by playing one note of a chord at a time that aren't sustained in a pattern. While you may see an arpeggio where two or more notes are played at once or some notes may overlap in a sustain like manner this is more an exception then the norm. An arpeggio is also typically rhythmically straight or if not repeated in a pattern. It's really the only way instruments that can only play one note at a time can play a broken chord.

Some may say that there is a defined pattern to an arpeggio, but that's not the case. This is due to how musician are typically introduced to the concept of an arpeggio though excessive books where they play up and down the notes of a chord and think every arpeggio is the same.

As an example let's look at a standard open E major chord on a guitar.

If I just play all the notes at the same time then I'm just playing a chord. If I play one note of the chord after another and don't let them all ring out then I am playing an arpeggio. If I play the lower 3 strings then the top 3 strings it's just a broken chord since it really doesn't have the texture we are looking for in arpeggio. If I play one note at a time, but let them ring this is also just a broken chord for the same reason. If I play the notes one at time, but play the last two notes at the same time it will depend on the exact execution, but most of the time it would be an arpeggio.

Broken chords are in essence just a type of arpeggiation the difference being the order in which the notes are played.

And this is something more like a broken chord.

An arpeggio literally sounds, as its etymology suggests, like a harp. The notes run into each other for a rippling effect and the device has become a standard technique in program music used to suggest wind, water, or any smoothly continuous action, and also in film music to depict any dream-like blurring of reality. Arpeggios are represented on the page by a single chord preceded by a vertical wavy-like character. A broken chord, in contrast, is a sequence of separate notes, so written, which clearly outline a chord. Indeed, it could be more accurately termed a melodicized chord. Consider the guitar introduction to the Beatles' song, "I Feel Fine:" Wikipedia characterizes the passage as an "arpeggiated riff." But it is actually a well-defined sequence of broken chords falling predictably through a secondary progression. A Beatles' song with a true (and literal) arpeggiation may be found in the accompaniment of "She's Leaving Home."

Broken chords are just what it sounds like, a chord that isn't a block chord. Arpeggios are a specific type of broken chord where it goes from highest to lowest or vice versa in pitch. These are both examples of arpeggios:

In this case, you have stacatto arpeggiation ascending before the triplet. 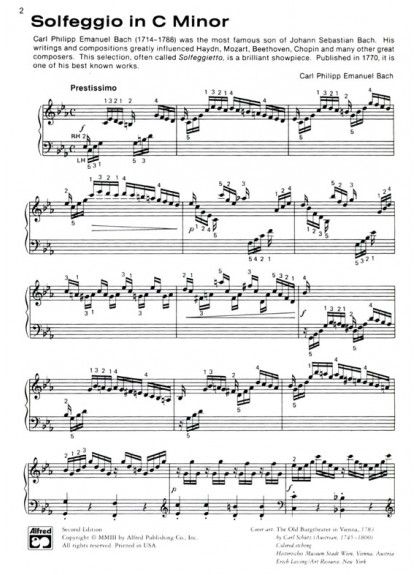 Here you have arpeggios both ascending and descending

There is another version of broken chords that is very common. That is Alberti bass. Instead of going Low Middle High or vice versa, it goes Low High Middle High.

This is a very basic example of Alberti bass. In essence this could be inverted so it goes High Low Middle Low, or there could be more than 3 notes in the alberti bass sort of like this:

In short, broken chord is an ambiguous term for any way that a block chord can be broken up and arpeggio is a specific type of broken chord.

Well, people are applying the term "arpeggio" in different ways and that gives food for different thoughts on the matter. There is another topic here on music.stackexchange.com where someone asked whether Alberti Bass is a type of arpeggio. And despite the fact that the question is different the answers are similar since the same subject is touched. I am talking about this topic: Is Alberti bass really a type of arpeggio?.

Since the question in that topic is different you could argue that neither of those two topics is a duplicate question, but you can't help that the answers are similar. Anyway, in that topic I posted an answer which I think fits very well here as well. In that answer I cover different usages of the terms "arpeggio" and "arpeggiated", here is the answer:

Many people will think of a typical arpeggio in piano music as a chord written with a wavy vertical line in front of the chord. In Chopin's Etude Op. 10, No. 11 this is pursued to an extreme degree:

But the terms "arpeggio" and "arpeggiated" are also applied in various other ways.

Is Alberti bass really a type of arpeggio?

Well, Alberti bass is often defined as a special type of arpeggiated accompaniment where the notes are played low, high, middle, high.

Beethovens Moonlight Sonata has another type of arpeggiated figure:

The term "arpeggio" is also applied when you talk about practicing scales and triads in that many people call it scales and arpeggios. Here is an example for violin:

And below is an image showing another type of arpeggio; it is from Bach's Chaconne for solo violin where the violin player is supposed to play arpeggio. Bach has only written out the arpeggio for the first 8 thirty-second notes, and then he has written the term "arpeggio" indicating that the violin player should continue to play the chords in a similar way:

Note that the dynamic signs mp and dim. is the editor's suggestion. Bach did not write dynamics in this piece. Thus the performer can make his own dynamics.

So there seems to be an official difference at least.

"Arpeggio" is literally "like a harp". Notes are not stopped before playing the next note. If you take a look how a harp plays a multi-octave chord or run, you have to alternate hands and play the fingers one by one (to give the inactive hand time to move to its next position without interrupting the flow of the arpeggiated phrase).

When arpeggiating on a bowed string instrument (when done in a continuous back-and-forth motion, you might see an actual "arpeggio" instruction in the score but otherwise you have to arpeggiate even single chords with more than two notes on most modern strings), you move the bow across strings in an unstaggered smooth motion, sounding two strings simultaneously temporarily. A broken chord, in contrast, will try sounding only one note at once and will have the bow either stop (with or without direction change) or bounce in order to achieve that.

Using a three-note chord as an example, an arpeggio would refer to all three notes sounding separately, in any order. However, usually an arpeggio includes all the notes of a chord before repeating one. An arpeggio could go C-E-G-E or C-E-G-C but wouldn't normally be C-E-C-E-G. A broken chord would have two of the three notes sounding together and the third sounding separately (eg. C,E/G or G,C/E) In certain settings, broken chord notes may sound separately but still give a broken chord effect. If I played C-E-C-E-G-E-G-E, it would sound broken because my ear would associate two of the pitches together at a time. The notes of an arpeggiated chord of more than three notes would still all sound separately, but the chord could be broken with different combinations. For example, a four-note chord could be broken as one note separate then three together, or two notes then two notes, or one note then one note then two notes, etc. Many classical piano sonatas and sonatinas use arpeggiated chords in the form the Alberti bass. Chopin waltzes make use of a broken chord accompaniment.

2
Is there terminology to distinguish arpeggio as embellishment versus 'broken chord' figuration?
7
What's the difference between a rolled chord and a broken chord?
8
Is Alberti bass really a type of arpeggio?