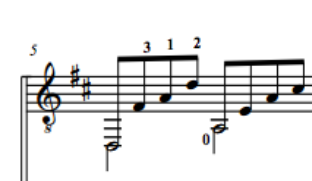 7
What does the 8 under the treble clef of the tenor part mean?
24
Why does this note have a stem pointing up and another pointing down?

3
8 quarter notes in 4/4 time?! And how do I insert this into Guitar Pro?
3
Half oval 3 over notes
3
How to indicate left hand for piano sheet music
10
Why is the treble clef (in the lower staff) parenthesized?
2
Tips on speedy scale writing (and singing) in different clefs and modes
1
lilypond bug with octave change/whole note
4
How to notate a phrase than goes up and down several octaves
5
Lilypond: Putting left hand notes on treble clef - one more question