8 quarter notes in 4/4 time?! And how do I insert this into Guitar Pro?

Look at the below graphic and please tell me how is this possible.

How is this possible? If I try to copy the below into Guitar Pro it gives me an error.

(There are two half notes (E and A) as well, those I am guessing are on the 2nd track and GP won't even let me put them in the same place thats shown in the graphic) 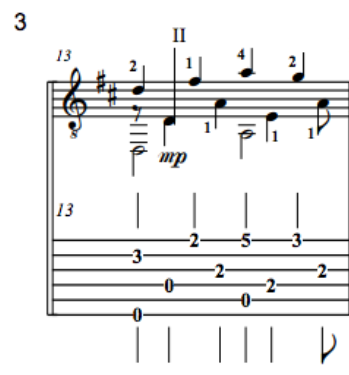 This is a pretty strange measure of music, I will grant you that. I would have notated this differently, but it is playable if you can decipher it. The notes in the middle voice should be written as single eighth notes and tied eighth notes. "Staggering" the three syncopated notes in the middle voice by writing them as quarter notes is against the conventions of proper notation.

I'd just like to emphasise (for those that are still confused by this layout) just how the voices work and interleave with each other.

Following is the bar re-created with MuseScore with each of the voices in a different colour - Blue (primary), Green (Secondary) and Gold (Tertiary). The same colours are duplicated in the guitar tabulature to emphasise how they are transcribed from score to tabulature notation. 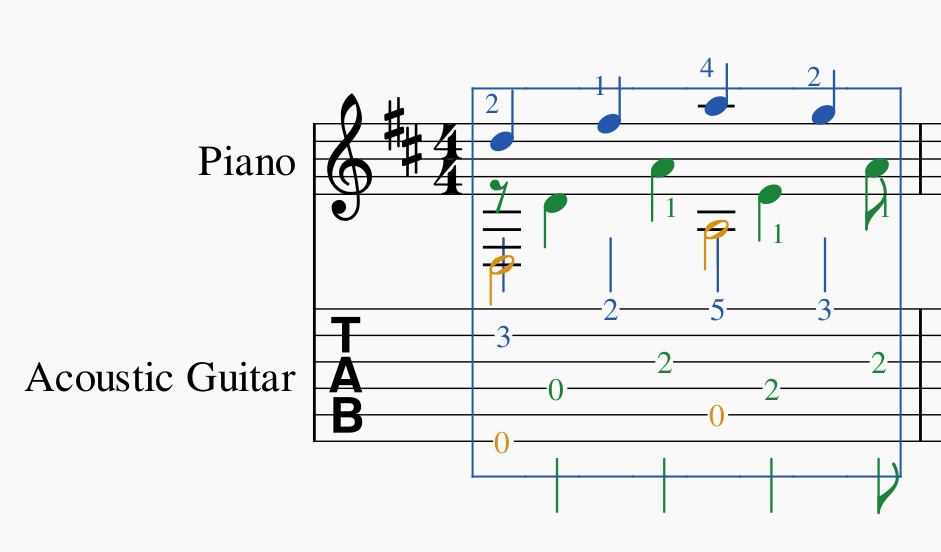 You can clearly see in this image how each of the three voices has its own timebase to work from. The primary voice is played on the beat (1-2-3-4). The secondary is played on the half-beat (and-1-and-2-and-three-and-four) offset by the quaver rest at the start (also in green). The tertiary voice is notation more normally seen for multi-voice layouts, and has the more obvious beat 1-3.

While this format is frowned upon by music purists it does make for a cleaner layout. It is though, as you have seen, slightly more cryptic than the more explicit (and correct) notation shown by @WheatWilliams, but once you have got used to looking for this style (and especially noticing that elusive rest at the start of the secondary voice) it becomes just as readable as the more strict layouts.

Personally I don't know which method is better - the strict (though maybe overwhelming to the beginner with all those ties) notation or the loose (which makes it clearer what the length of the notes are if not the timing) notation. Suffice it to say, though, that with the loose notation becoming more and more common it's important to get used to reading both of them and translating, in your head, between the two.

4
Sampler Track Resets In Logic Pro X
1
Some numbers in notation, what does it mean and how do I replicate it in Guitar Pro?
7
8 under clef and timing questions
3
Half oval 3 over notes
4
How to put this one half note and three eighth notes concatenation in Guitar Pro 6?
9
Guitar Pro voicings limitation. Need Guitar Pro expert!
3
Strong and weak beats in 4/4 time, when the notes aren't quarter-notes
2
how to read quarter notes and half notes in 3/4 time?
9
Orchestral score has inconsistent time signature changes and note lengths