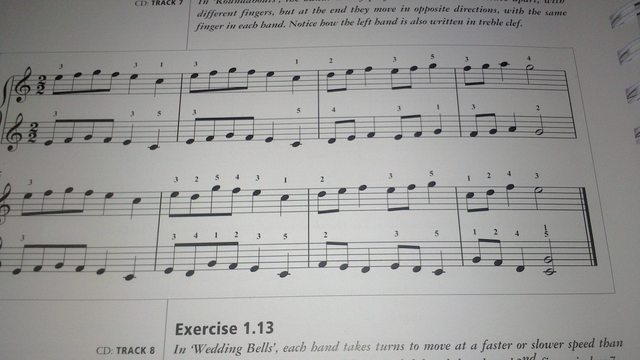 This piece (called Roundabouts) is from a book on how to play the piano. I thought it would be fun to analyse this piece but it seems to be very difficult.

It's in the key of C major and the two first bars is a C major chord with some NCT (non-chord tones). The third bar could be a D major chord or F major (but finding the chords may not the the right way of doing the analysis).

Is this way of analysing the piece even correct or helpful at all? How would you go about analysing this piece as music theorist and as a pianist who want to learn this piece?

As you said, all the notes "on the beats" in the first 2 bars belong to a C major chord, and the piece ends on a C major chord. So it's a reasonable assumption that the key is C major.

Before you can identify the "chord changes" you need to decide on the "harmonic rhythm", i.e. where the changes occur.

The first step towards that is finding where the cadences (at the ends of the phrases) are. There seem to be two 4-bar phrases. That would suggest some sort of cadence leading away from C at bar 4, and back to C at bar 8.

In bars 3 and 4, the notes on the strong beats are D E F G which suggests using a standard way to harmonize a scale ending on the dominant chord (G).

The second phrase, bars 4-8, again starts with two bars of C major chord, and the last bar looks like a perfect cadence G (or G7) C, taking the right hand C at the start of the bar as an unessential note. Copying the harmonic rhythm of the first phrase, you need two chords to harmonize bar 7.

Of course you could do something completely different - e.g. take bar 4 as a nearly-but-not-quite-Phrygian-mode cadence like B-half-diminished-7th-second-inversion E-minor, and then fit everything else around that idea (which would most likely not involve starting and ending on a C major chord) .....

But that's the difference between "getting an A grade in a Music Theory 101 exam by demonstrating that you know how to apply the conventional rules of common practice harmony and give what examiners expect to see as the right answer" and "being a composer." (Look at the first volumes of Bartok's "Mikrokosmos", for more examples of what I mean by that.)

The second bar seems to me to still be built on C-E-G. 3.1 Seems to be Super Tonic chord while 3.2 seems to be Mediant chord. The cadence point in bar 4 seems to be Imperfect (Iv-V).

Bar 5 seems to be the tonic chord again. In bar 6 you see in the first pulse a D jumping to a G. This would indicate that both the G and D is chordal notes which would give me the idea of dominant. Second Pulse 2 of bar 6 seems to be Tonic again.

The key signature is 2/2 (cut time), because the tempo is fast and they'd like to emphasize the first and third quarter notes of each bar. The "feel" of the piece is in "2."

You're correct that the piece can be thought of in C major. Because the piece is only one line of melody in octaves, one can only perform a horizontal analysis in that you can't glean information from the vertical counterpoint of multiple tones.

All this is within the harmonic land of the key of C major. You could harmonize the piece in the relative minor of C major. By harmonizing the melody in A minor you wouldn't hear too much dissonance aside from the misplaced rhythmic stresses of C, which would be the less stable mediant in A minor as opposed to tonic in C major.

All of this being said, it's very likely that it should be interpreted in C major, because the final three note chord of the piece is "C-E-G."

It's in C Major, and the progression is basic I-V-I-IV-V-I (C-G-C-F-G-C). It's 2/2, because larger note values are easier to read and write. The tempo is fast, and to write in 4/4 would probably mean using 16ths instead if 8ths for most of this.

3
The tonal function of a bar in minuet by krieger
5
How is the mordent played in the given piece from Petzold
24
The difference between self-taught and professional pianists
8
How should I practice the piano piece Fantaisie-Impromptu?
1
What does an accomplished pianist's first time with a new piece sound like?
3
What are some good classical pieces to start learning analysis for the beginner?
1
What are these non-chord tones in the Jackson Five's "Want you Back"?
0
Sight reading process for this instance
4
What's the correct analysis of this harmonic sequence at the end of the first movement of Dvorak's Fourth Symphony?
3
How do you explain this Db7 (functional harmony) in "There will never be another you"?