How can I create custom drum beats in GarageBand?

GarageBand's main solution for adding drums and rhythm to songs appears to be through pre-made drum loops and the new session drummers. I desire more customizability with the beats I add to my songs. How can I create custom beats in Garageband?

GarageBand employs loops as one way of creating drums, but you're right, it is very limited especially if your interested in keeping up to date with pop music (trap, EDM, etc). There are a couple of solutions:

Drummer Tracks
This was originally a feature with Logic Pro X and has since migrated to GarageBand (OS X only). As Dave mentioned in the comments below your question, you can select a drummer from a set of styles (R&B, songwriting, etc) and select from several drummers within each style. Each drummer can be further customized by decided how many fills they perform, what sub-set of drums they use and even more. I feel it is a large step above using loops, but can be limiting if you don't use it properly. If you have all of your drummer regions set exactly the same it can be very boring so make sure that for each region it is tweaked to account for the varying dynamics that are part of most songs.

Software Instrument
This by far is the most flexible way to create drums. Create a new software instrument track, select a drum kit and get to it! The one issue with this method is that you need to know how to create a drum beat. I teach a music production course at the high school that I work at here in Toronto and lesson one with drums is that for most styles of music, the most basic drum beat possible is playing the bass drum on beat 1 followed by the snare drum on beats 2 and 4. This is a good starting point.

Another technique that I employ with my students is getting them to copy existing drum beats (bass and snare only) so that they get a feel for how producers put beats together. Of course, there are other aspects to drum like using the hi-hat, toms and cymbals.

Of course, any time you create rules in music there are a ton of examples that break those rules. I think the ultimate rule is that if it sounds good, then go for it (very subjective, I know). Hopefully this gets you started.

EDIT - Extra Info
Beat Grids (Note: Not available in GarageBand)
There are some DAWs (Digital Audio Workstations, which is what GarageBand is) that feature a tool that I call a "beat grid". There may be a more correct term for this. Here's what it looks like in a DAW called FL Studio: 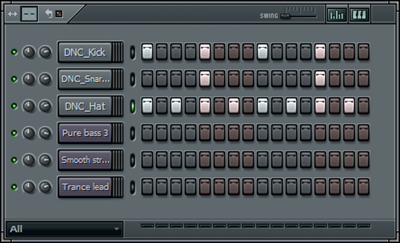 It allows you to toggle on/off each sound of a drum kit. Each row represents a sound in a drum kit and each column represents a point in time in which that sound is triggered. This allows the producer to hear what their beat sounds like in real-time without having to worry if they are playing properly because there is no playing involved, only clicking of the mouse on the grid. If you have the funds, Logic Pro X is almost a carbon copy of GarageBand, but under the hood it's much more powerful. It has an instrument called Ultrabeat that allows you to use a beat grid.

Another tip in GarageBand is to set up the Drummer to play something close to what you want. Then you can copy that track that it creates into a new Software Instrument Track. You can then edit that as you would like. This gives you a lot of flexibility, but also gives you a nice full sound to start off with.

Not the answer you're looking for? Browse other questions tagged software drum-machine garage-band or ask your own question.

2
How to learn the Smart Guitar of GarageBand for iPad?
1
How to input quarter tones in Garageband
7
Changing drum layout in GarageBand
3
How to play in time, for songwriters
4
How can I use GarageBand as a simple drum machine to play against?
2
How can I transfer GarageBand software instruments or find equivalents in Ableton Live?
3
How do I make the snare drum identical every single hit? (Garageband)
0
how can you put samples together and make a drum machine out of them for midi instruments?