Why do I need to change chords throughout a piece music (Amazing Grace) to make it pleasant to listen to?

Why do I need to change chords throughout a piece of music? For example, when playing a guitar accompaniment for 'Amazing Grace' it does not sound pleasant when you play only a G chord throughout the song.

My question is not why does this chord progression sound good, but why do I need to change chords in the first place to make it pleasant to listen to?

FWIW: to me, a jazzy accompaniment like that rather ruins such a minimalistic spiritual as Amazing Grace. I would in fact prefer a bordun G!

But to answer why chord changes make sense – often there's a simple reason: some parts of the melody are in dissonance with the tonic. In Amazing Grace that's actually not the case, but in many pieces changing chords is necessary to avoid clashing seconds.

Apart from that, chord changes simply add movement. Staying on a single harmony creates a meditative sort of mood (somewhat cliché: the religious use of bordun bass notes in organ point as well as Indian tanpura), and can easily become just boring. With chord changes, you can give the music more of a “direction” by supporting changes in the melodic context and possibly deliberately adding dissonance with proper resolutions.

Well, you need to change chords because you are not Bach (cf BWV 540, Toccata in F major). Melodies usually suggest a harmonic context that will affect the choice in countermelodies and also underlying chords that can be used to emphasize the harmonic context. The point in most harmonic progressions is to keep some notes in some chord and change others, thus shifting the harmonic framework. Within that framework, notes in a melody gain a function: they are in harmony, they may be out of harmony, they can suggest following changes.

Basically, the melody or melodies are like dancers on slowly moving floats, and their dance emphasizes the movement of the floats.

Modern music has pretty fixed expectations about the size of float to dance on. Bach's use of harmonies is more varied: you can have an organ point staying in the center of attention for minutes, but most of the action rather resembles dancing on floats in rapids: sticking around with a sustainable full chord for a bar or two is not generally his thing.

Music doesn't have to change chords, but such music is comparatively rare.

Amazing Grace is a hymn, and the phrasing of hymns is rooted in classical harmony where cadences typically mark the end of phrases. By definition a cadence requires a two chord movement. So, to the extent that musical phrasing is marked by cadences, a piece of music needs to change chord minimally to end phrases. That is exactly what Amazing Grace does. 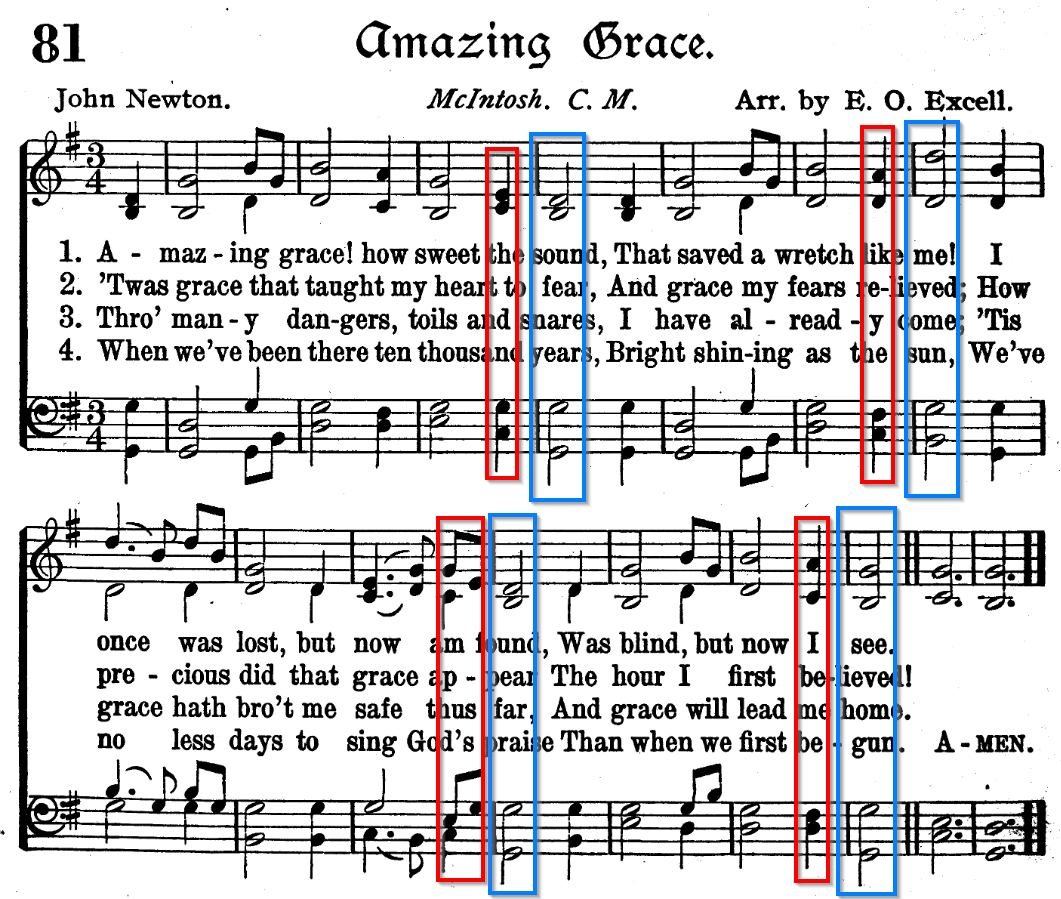 Almost the entire melody is based on the G major chord and all the phrases end on some form of the G major chord (blue boxes.) It would seem the whole piece could be harmonized with nothing but a G major chord. But, if we did that, we would have no cadences, no phrases. To form cadences the phrase ending G major chords are preceded by some other chords (red boxes.) In this case the cadences are C to G and D to G or in Roman numerals IV to I and V to I.

I suppose you could try a super-minimal harmonization with just the G chord through out with simple two chord cadences to end the phrases. Whether it works would probably depend on the rhythm pattern used in the accompaniment. 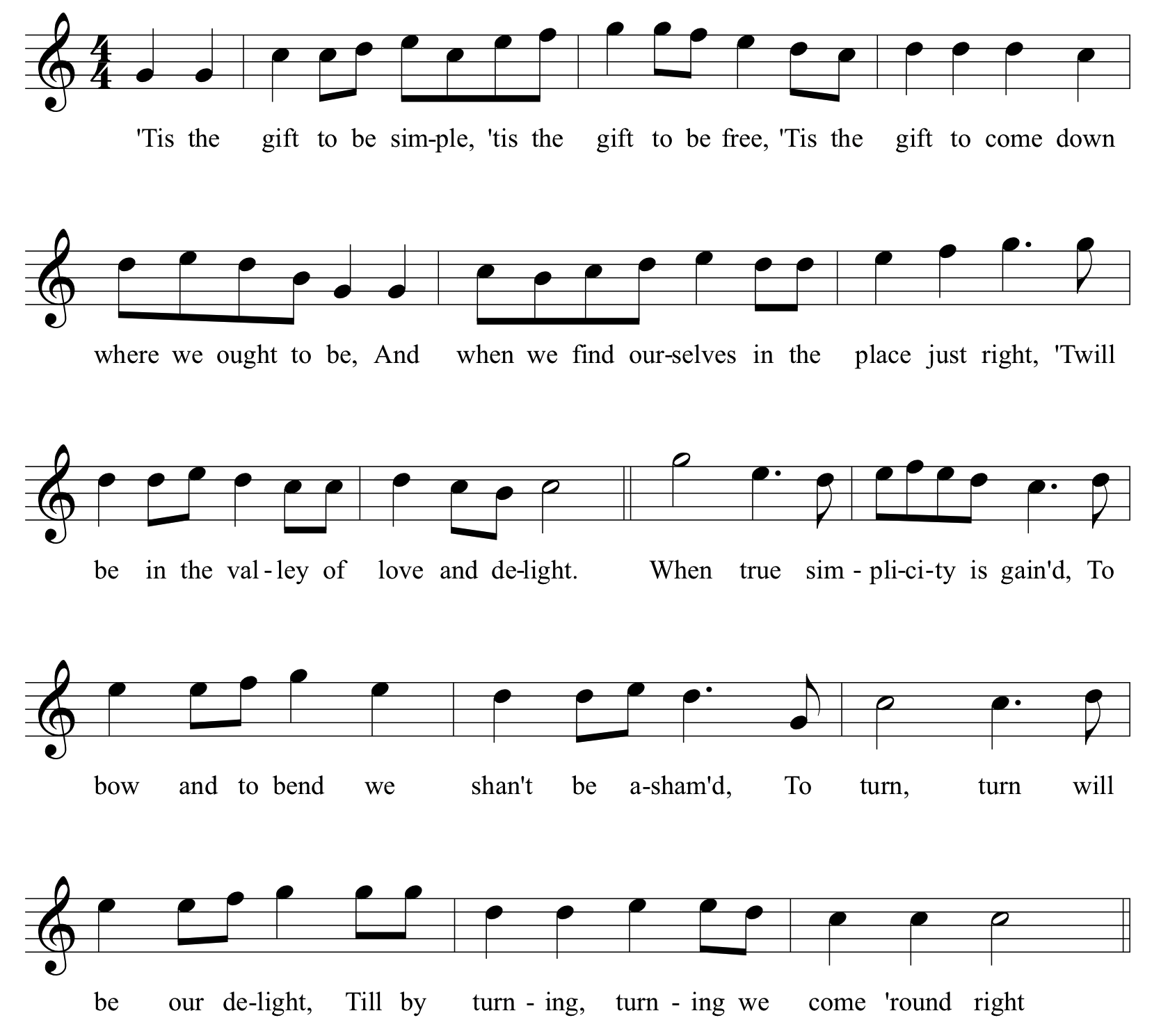 The pickup measure and first two full measures use mainly chord tones of C Major - C, E, and G. Using the chord tones on the strong beats (1 and 3) really helps establish C Major as the harmony.

Measure 3 has mostly D's. You wouldn't want to use a D chord, because it's not closely related to C. A G chord, however, is related to C Manor and has D as the fifth.

Note: If a C chord was used instead, the D and C would clash.

Measure 4 has mostly G7 chord tones, but there is an E that seems to be lost. That's okay! Notice how the E isn't used on the strong beats.

A few things to remember:

Not knocking bagpipe music in any way, but since the drones stay the same, as they don't change notes, the tunes played effectively stay on the same chord. This means that sometimes the melody line doesn't seem to fit exactly, but that's part of the nature of bagpipe tunes (there's probably a word for them - skirls?) and also the reason they don't seem to stray from the beaten track too much.

You need to change chord in the same way as you need to change pitches and note lengths! That is, you don't HAVE to, and there might even be a certain minimalistic charm to a piece consisting of a string of identical notes. But it's not the general plan.

Just to offer a contrarily view. There is times in music where the choice of chords is conservative. You don't need to move to different chords all the time to make music effectively.

You can easily have the same chord for several bars and still do interesting musical things. I would go so far as to say that not going wild with chord choices is one of the hallmarks of a good composer. It does show a certain maturity in composition.

As an example of a modern song with this idea check out Mary Jane by Alanis Morissette. It is basically just the same G chord strummed for 4 minutes.

13
Help me understand this progression
6
How to interpret non-diatonic note?
2
What key fits with the chords Em7, F#m7, and B7#5?
12
Harmonic analysis of the B section of “Have You Met Miss Jones”
12
Why does the dominant lead to the tonic?
5
What scales to play over A minor blues?
4
Why does the chord progression (i-)#IV-i sound acceptable?
1
Why does this harmony work?
3
Identifying chords with multiple extensions
8
Why do certain chords “lead” to another?