What chord is FMa? 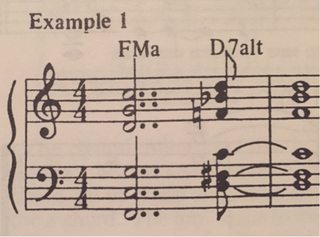 I'm not sure what FMa is signifying. It appears to have a 2nd and 6th added with the result of "f g c d".

The Ma symbol is typically used to denote a major quality in chords as in FMa7 (F-A-C-E) or FMa(F-A-C) , but this chord is not an F major chord because there no major 3rd which is A in this case.

The chord depicted seems to be quintal in nature (built in 5ths) as from the bottom up we have the notes F - C - G - D and then the G and C repeat. This chord is almost an F6/9, but the A is missing so a more appropriate name would be F6sus2.

Quintal chords don't typically have chord symbols associated with them, so my thoughts would be that the author just wanted to say it's some kind of F chord with a major tonality.

I'm going to try and look for the book to give more insight to this, but I'm almost certain that is whats going on.

I agree with @fdreger that this is an F major chord and that the 2nd and 6th do not change its major quality.

Normally the 3rd will determine if a chord is major or minor. This chord has no 3rd so we need to look at its root with respect to the key signature. Here the key is C and F is the IV of C, so we are correct to infer that it is major in the absence of a 3rd.

F9 add 13 might be a more accurate name, but in jazz anything goes.

Not the answer you're looking for? Browse other questions tagged chords notation harmony chord-theory or ask your own question.