How did the plagal modes differ from their authentic counterpart in practice?

In the traditional modal system there were eight modes. Four that were authentic and four were plagal. These modes are depicted below:

Historically these modes arose as ways of describing and categorizing music that already existed. For medieval liturgical song, or Gregorian chant, the system of modes made it easier to match antiphon chants with a psalm tone. The right psalm tone would mean that at the end of the psalm it was easy to go back and sing the antiphon again. The modes describe three things: (1) the reciting tone, a central pitch sung most frequently; (2) the final, which is just the last note, and is not necessarily any kind of "tonal center", and (3) the ambitus or range of all the pitches sung. That's really all modes described for chant. Later theorists did try to match different affective characters to the different modes based on their imagined connection to the ancient Greek modes, but scholars still debate whether these descriptions match up with anything we can hear in surviving music.

In polyphonic music of the Renaissance, composers used the modal system to structure their pieces; and again the primary motivation for this was practical, so that a polyphonic work would fit well with the monophonic chants in the same service. The mode determined the range of the Tenor voice and the sequence of cadences. So a work in mode I (Dorian authentic) would have the Tenor singing a range from D3 to D4 and would begin and end on D (usually inflected with F sharps to sound like "D major" at least at the end, because this was considered more consonant and satisfying). The main difference with a mode II (plagal) work would be that the Tenor range would be from A3 to A4; the first and last major cadences would still be on D. Theorists did make different recommendations for the internal cadences in plagal vs. authentic modes. They also wrote extensively about the affective character of each mode, and composers appear to have written in a different manner (another translation of "modus") depending on the mode.

For mode in chant, see Willi Apel's Gregorian Chant and David Hiley's Western Plainchant. For the debate about modality in polyphonic music, see Harold Powers' article "Is Mode Real?" and several articles in the Cambridge History of Western Music Theory. For historical sources, the theorists Zarlino and Cerone both give detailed expositions of modal theory. As usual, a good starting place is the article on "mode" in the New Grove Dictionary of Music and Musicians.

The modes originated in Christian chant, and you asked for a practical difference, so here is an answer from a chanter's perspective.

First, let me regurgitate the theory, then I'll give examples, and my own commentary.

Authentic and plagal have the same tonic. Their cadences vary here and there, just like any song, but they always come back to the tonic. Their difference is not where their phrases end, but rather which corner of the scale they each prefer to be sung in.

Compare 'London bridge is falling down' with 'Mary had a little lamb'. Same key. Same scale.

The general difference is threefold.

Sadly, teachers of modal theory rarely give examples from the genre that it originally came from.

I have given links below to recordings that I think demonstrate the modal features well.

But notice that Mode 1 lingers around its 5th (A), while Mode 2 emphasizes its 3rd (F). The Plagal rarely goes higher than the 4th (G) and has a lot of subtonic to counterbalance the meekness of its dominant on the 3rd, in contrast to the Authentic melody which adventures up above the 5th (A).

The tonic of both Phrygian modes is E. Notice in Mode 3 how the voice tickles the 5th (B), highlights the 6th (C) and often settles mid-figure on the 3rd (G). It drops to the tonic only at the ends of clauses.

The Authentic Phrygian's dominant is the 5th (B), but it was raised to the 6th (C) in many parts of Europe near the end of the first millennium. I don't know why, but I suspect organum and harmony had something to do with it.

Hypophrygian mode, in chant, spends a lot of time closer to the tonic. Contrary to the common belief that Hypophrygian's dominant is the 4th (A)---true only in simple psalm recitation---, it actually spends more time on the 3rd (G), the 2nd (F), and the 1st (E), typical of Plagal tones.

For the Mode 4 recording, they even had to artificially drop the tonic drone down four diatonic steps because of dissonance with the flat 2nd. (It's a complicated story. Mode 4 is weird.)

Authentic Lydian is major with augmented 4th, having its tonic based on F of the diatonic scale. Its dominant is again the 5th (C), as you can hear Lycourgos Angelopoulos shredding that note. Notice sometimes the 4th becomes an accidental flat, casting the chant into major scale.

Mode 5 rarely passes under the F, but Mode 6 Plagal Hypolydian dances around the F like a child afraid to stray too far. With its 3rd (A) dominating, the 4th (B) often becomes a diminished neighboring note (B-flat) by law of attraction, and so in practice Mode 6 is more often major scale than Lydian.

Mode 7 and Mode 8 are found on the G. Dominants are once again 5th (D) and 3rd (B) respectively, but Mode 8 tends to emphasize the 4th (C) instead of the 3rd as an alternative dominant. The reasons for this are very complicated, and have to do with a medieval aesthetic taste for the upper note of the half-step.

Notice in all four cases that the Plagal is the same mode as the Authentic in every way except its preference for a lower dominant.

Gregorian chant evolved from an older simpler Roman system of chant and was only later adapted to the Greek 8-mode system. The melodies have many shared features and are not always easy to classify.

Likewise, the tonic bases of the modes---D, E, F, G---were not fixed. Plagals are sometimes written in the 5th key, e.g. Mode 2 in A minor, versus the standard D Dorian.

The accidental flattening of B in practice meant it was commonplace for Modes 1 and 2 to modulate from Dorian to Aeolian, 3 and 4 from Phrygian to Locrian, and 5 and 6 from Lydian to Ionian. Mode 8 even sometimes goes Dorian, but only for chromatic effect.

The idea that the Plagal modes are strictly one fifth above the Authentic modes is false. They do happen to be up there sometimes (see below). But Hypomixolydian is NOT equivalent to the D Dorian scale. It's equivalent to the G Mixolydian.

Remember, the 8 modes are a subset of the hypothetical 14, of which half are mere variations on the other half.

The "hypo-" designation is pretty meaningless, other than to say the Plagal modes tend to be under the Authentic modes.

In fact, in the Byzantine system of eight church modes, the relationship tends to be the opposite: Authentic modes are usually lower and shorter in range, while Plagal modes often soar above the 5th. (The reasons are due to changes over time rather than a prescribed model.) The appellation there would be "Hyperdorian".

In the Middle Ages, shifting from one mode to another was more based on gut feeling than on theory, at least initially.

Spiritus Sanctus
St. Hildegard of Bingen composed an antiphon in both Dorian and Phrygian, flattening the second. This one from the post-Gregorian period shows a growing taste in the octave note.

Haec Dies
Angelopoulos starts this Mode 2 gradual on the D Dorian, then shifts into A Hypodorian. This shifting happens occasionally in the middle of chants, Plagal becoming Authentic, Authentic becoming Plagal, temporarily. The melodies always return to their original tonic by the end of the chant. This one is an exception.

Pia Mater Gratie
A two-part conductus composed, the lower voice in F Lydian, the upper voice in C Hypolydian (C major). The tonic tension between the two modes, despite their shared scale, creates a contrast that sends shivers down my spine!

There is so much more to modal/tonal theory than just ranges, intervals, and predilection for scale degrees.

Modal theory is 10% scales and scale degrees, 90% learning the right motifs to improvize. All the above is the 10%. That other 90%, which I didn't get to, is basically chant theory.

But it would take an entirely different level of interest---and a Stack question---to even start delving the details of difference in melody among the eight church modes.

Anyhow, I hope it gives you an idea how the modes work in their original context.

As the question has been fully answered I’d like to add a picture of a table resuming all: 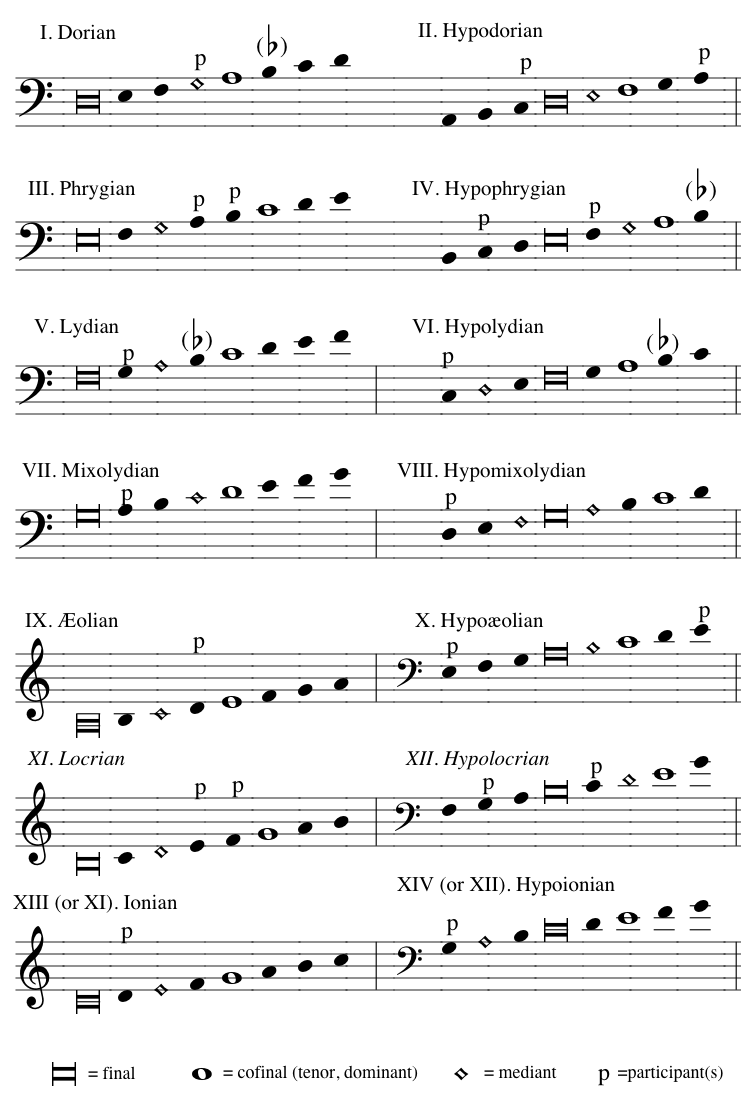 I have been researching modes recently and 'The Concise Explanation of Church Modes' by CC Spencer was recommenced as a place to start my research.

According to Spencer each plagal mode and its harmonizations' were "ruled" by the modes corresponding authentic scale. For instance while Hypo-Dorian would start a fourth below the opening tone of D it would follow the structure of the Authentic Dorian mode when harmonizing. This is why the Hypo-Mixolydian although structurally identical to Dorian is different since its harmonies would be ruled by the Mixolydian mode and its corresponding scale. It's a fascinating system and although I haven't been at it for long and his writings have cleared up many issues that I have had with the more modern approaches by most text books.

The back of his book also has a number of examples including chord progression by degree for each mode similar to the ones used in The Rule of the Octave harmonization exercises. He also explains many of the theoretical idiosyncrasies of the time that affect the availability of harmonizing chords such as the lack of a third inversion, all chords were limited to root and 6/3 positions at the time, as well as the unavailability of some accidentals, since organs were not yet tuned in equal temperament, which would exclude some modulations.

In my initial analysis I am seeing unfamiliar progressions, whether by today's standards or my limited knowledge I'm not sure, such as i-v-i-VII-v-IV-III-i (authentic) or III-II-v-IV-VII-III-VII-III (plagal) with dominant chords being an exception not the rule. It makes for a very round open sound that reminds me of, what else, church.

Not the answer you're looking for? Browse other questions tagged theory composition history modes or ask your own question.

2
Why does the V-I cadence sound tonal rather than modal?
0
Why do modal chants sometimes end on another chord than the tonic chord?
1
What are hypo modes, related to standard guitar?

46
When were the terms "Major" and "Minor" applied to keys?
4
What are the official modes from Ionian to Locrian?
4
How to distinguish the mode of a riff
9
What's the value of modes?
7
Is Locrian a minor mode or is it a diminished mode?
8
Can you help me understand Modes from the aspect of chord changes?
3
What are the modal characteristics of major modes?
15
Should mode names be capitalized?