I'm using Starbound Composer to directly edit a .midi file. I'm not really sure if it's .abc or .midi that's the main focus here.

Okay, so anyone who's played the PC-98 Windows Touhou games will know what I'm talking about. It's the song that plays during the fight against the first Extra boss in the entire series.

The song suddenly cuts off at about 25 seconds and switches tracks to the main part of the song, like so: 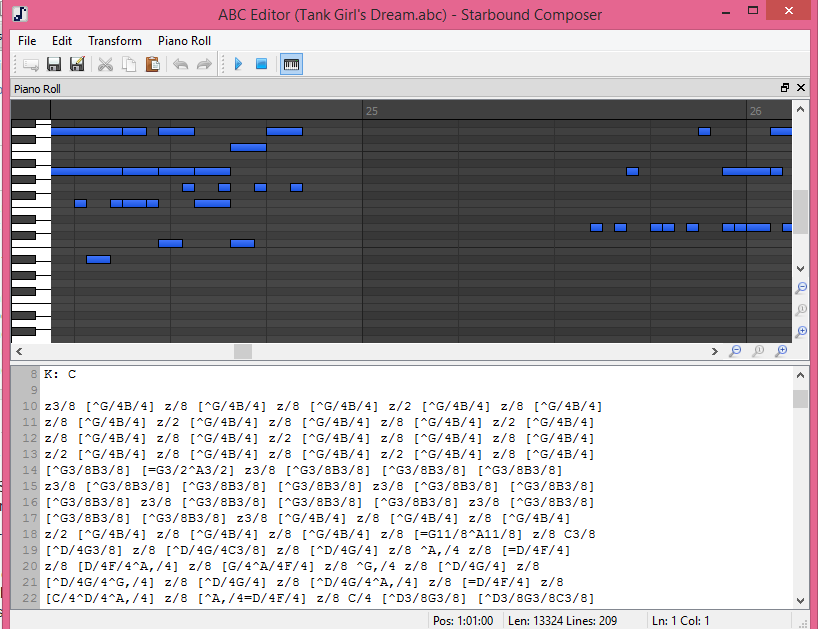 I want to make one track cut off at the point where the music pauses, and then have the other tracks cut in when the music starts again. However, I have no idea how to do that. I know it has overlapping notes, but I honestly don't want to have to count every single note.

In an .abc file, what, exactly, determines the note location and length? Knowing where the notes are placed would really help me out. Thanks.

update: Whoops, I figured it out but I really don't want to page through 25 whole seconds to locate where the music cuts off, and suggestions? (Note: the z[x]/8 is what determines note length.)

Be aware that I've never used Starbound (though it looks pretty cool), but I know something about ABC.

If you have a long pause like that, you're going to have a bunch of rests - Look for z a bunch of times in a row to find the spot where the pause is. You might be able to use ctrl + f to search for it, or copy the abc notation into a text editor and search it there. It looks like the generation is not using measures, so you might also have z followed by a large number, like z48.

ABC is primarily a music notation format, not a midi-generation language. As such, the only thing that determines time distance is the note values themselves. Since this doesn't have measures or a time signature, you're really stuck using the note durations to find out where you are.

You could try deleting chunks (in a copy of course) and listening to where the music starts - that might be the fastest way.

Not the answer you're looking for? Browse other questions tagged notation abc-notation or ask your own question.

29
What are the limitations of the ABC notation format?
4
abc notation : different chords sounding exactly the same
9
How do I notate sharps in ABC notation?
5
Handling of dotted eighth rests when a "swing rule" is in place, and whether physical note position has effect on it
13
Articulation between staccato and full note length?
5
Rendering 8va and 8vb with Abc notation?
7
can ABC notate multiple chords over a single held note?
3
How to notate alternate/secondary melody in ABC
4
How can I render "uneven" tuplets in ABC notation?
4
How do I draw ghost notes in ABC notation?