Is it possible to write a song without a key?

Can we say "This song has no key"? Are there songs that have/follow no key? Is it possible to create song without adhering a key?

First, a key is only really a basis. You can have an F# in a piece written in C Major without having the piece "switch" keys.

Second, keys are defined arbitrarily. Sure there is theory about what sounds good and that sort of thing, but at the end of the day it's just a group of notes that's just as valid as any other group of notes. This is made clear by modes where you have 7 different scales starting on F, 7 starting on G, etc.

There's also plenty of non-Western music that doesn't even use the same notes and intervals as us, so applying our concept of keys to that music doesn't make sense, although they may have their own analog to keys.

And it's entirely possible to compose music outside a currently-named key. I'll compose a song right now based on arbitrary frequencies:

In sum, your question amounts to "Is it possible to type a letter sequence that isn't an English sentence?"

A drum solo is a song without a key.

To add to the other answers, there is also dodecaphony, or twelve-tone technique, a method to compose music explicitly without a key by trying to give equal weight to all 12 notes of the western scale. 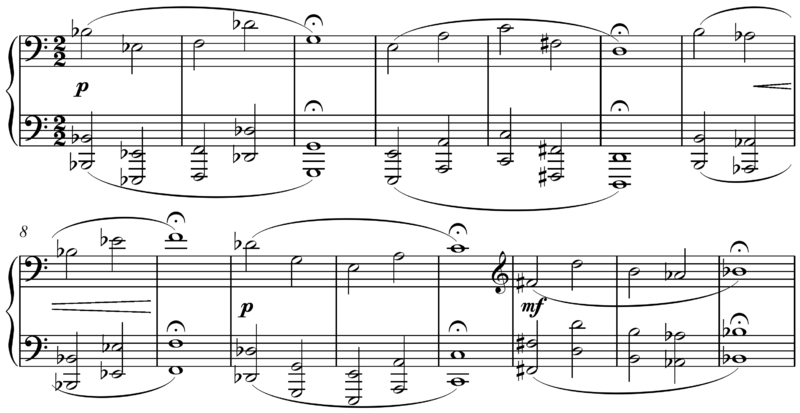 Surely sounds interesting, but this kind of music is definitely more for the mind than for the heart. ;-)

"Key" implies "tonality." The name of a key corresponds to a pitch class that is considered the "focus" of a key or section.

Is it possible to compose a melody without a key? Of course. That was the whole point of the Second Viennese School. Of course, it is possible not to be tonal (which implies a specific framework of relationships surrounding one central pitch) and still to be centric (which implies that a pitch is central, but the "Western" tonal framework around it is still not there). It is also possible to have multiple pitches serve as centric (an example is polytonality, though it is possible to eschew tonality and still have polycentrism).

All of what I have just stated falls within the Western equal-tempered twelve-tone system. As @Matthew Read points out, you can go outside that system as well.

As other answers have stated, it is certainly possible to write a song that does not conform to defined tonal "scales" like the Ionian mode (major scale) and related modes, pentatonic scales, and variations like harmonic and melodic minor (which differ from "natural minor", the Aeolian mode, in a couple subtle ways such as a major 6th or 7th).

If a melodic line does not generally conform to one of the above, it is generally termed "atonal". However, it can still conform to a system; music written in the whole tone or tritone scales, for instance, or in Middle Eastern and Indian systems which utilize quarter-tone differences. Whole tone and tritone music can still be written in Western notation, but many Eastern styles cannot.

Then, there are music styles that defy printed form; many traditional African call-and-answer styles were passed down for thousands of years solely through word of mouth, and completely lack a tonal center, focusing instead on rhythm and flow of the song. With the sweeping popularity of Western culture and musical instruments, particularly keyboards and synthesizers, a lot of African music has become more systematic, but you still hear very odd intervals reminiscent of the traditional songs.

In all cases, the Western music notation system evolved to handle Western music styles, which use the 12-tone system, key and time signatures. Even then, some contemporary music styles, especially a capella choral music and jazz, can make a pianist cringe when told to decipher it in condensed staff form.

It happens all the time.

At the risk of borrowing from one of my recent contributions - the tritone sound pulls a listener's ear in a meaningful way to a tone that's one half-step up from the involved notes. If we play a C-F# interval, music theory tells us that the most satisfying resolution to this interval will either be (enharmonically) to Db or to G. You can imagine a guitarist or a pianist simply holding a C-F# and then not moving their hands/fingers and simply adding the 'missing' root of the chord; D-C-F# implies D7 which is the V7 of G major, while Ab-C-Gb(AKA, F#) is the V7 of Db major.

This, along with the idea of relative minors and other substitutions, allows people to 'justify' all kinds of interesting changes, without even doing a ton of modulation. Consider the fairly common chord progressions of I -> III7 -> IV, or I -> III7 -> vi. Or to contextualize them a little bit, C -> E7 -> F // C -> E7 -> Amin. E7 contains a G#, which is not in C Ionian or A Aeolian; however, it is the V7 of an A minor chord. With A minor being relative to C major, as well as being squarely between F major and C major on the circle of fifths, sort of gives it what I'd consider an 'auditory seal of approval'. (I'm sure there's a better term for what's occurring there, but really think about it; F + A minor = a neatly stacked Fmaj7. C + A minor = C6, but it's got a big M6 between the root and the 6. This doesn't result in the death of a family member or anything, but it is just interesting food for thought IMO.)

Anyway. Even outside of songs which modulate to go to the bridge, or to close the song on a different emotional level than it started, consider a tune like Giant Steps. Coltrane is basically 'switching' so often between Eb, G, and B that it is just about useless to call the song as being in any key. In particular if you attempt to improvise over it; those Eb licks will not serve you very well over a ii-V-I in G. It doesn't really inform anyone's playing to consider the song as having a single key.

Atonality doesn't have to play into it; there's no need to look into tone rows unless you're really looking for something different to play around with. There's a ton of jazz which critically redefined the mentality of playing 'in key'. People cite Kind Of Blue as being a landmark album for a reason; it pushed a lot of what informs people's modern sensibility on how to improvise with both the motion of the chords as well as the sound of the song in the moment; as opposed to committing oneself to learning how to solo over every ii-V7 progression as if they were static chord changes that cannot be deviated from.

This has gone on to inform a lot of genres' approach to music. Consider every cookie-cutter forgettable Top 40 'hard rock' band you've ever heard which makes use of drop-D tuning and that Eb5 power chord to 'return' to the D5. That's chord substitution without the tritone interval to 'justify or explain' the placement of a b2 in a 'key' that would otherwise have sounded to relative to D minor instead of "D diminished, until it isn't." The tonic might be D, but that's not a key, it's a note.

There are songs that might as well not have a key, with so many accidentals that it basically becomes tonal soup. However, even those have a key to start with.

A key signature simply tells you seven of the twelve normal tones the song is written to use. You wouldn't be able to write down a song in normal notation without establishing what tone the spaces and lines on the staff meant.

Can we say "This song has no key"?

Certainly. Schoenberg's Pierrot Lunaire, composed in 1912, is one of most influential works of the 20th Century. (Its influence extends much further than you might think - into jazz and rock, starting in 1950's and 1960's, if not earlier) It is a collection of poems set to music written during Schoenberg's free form atonal period. (Before he settled on his Serial approach to composition.)

You can listen to it here:

And learn more about it here, for starters: Wikipedia - Pierrot Lunaire

To learn more about Schoenberg and his atonality, you can start here: Schoenberg - 1901–1914: experimenting in atonality

Schoenberg was the 'founder' (it wasn't a formally organized group) and leader of the so called Second Viennese School , mentioned by @Andrew in his answer.

Musique Concrete is a whole genre that no concept of key.

I recall one based on ascending and descending the chromatic scale. Having only heard it and never seen the sheet music I can't say what note it started on. Let's just say the music was different. Incidentally, there were no chords in the piece at all.

When my students ask me about atonal songs (songs with no key) I'll often direct them to the introduction to Victoria Sage (Jack Bruce) or The Dangerous Kitchen (Frank Zappa).

You have to understand that Keys are not arbitrary. The musicians have through countless hours experimentation over the centuries come to the realization of what makes beautiful music. This system we have is not intended to stifle creativity but to promote it. Everything your theory teacher teaches you is with the ambition to get you to make and perform beautiful music.

To answer your question on whether we can make music without a key. I would say that key is just a series of notes with semitone and wholetones in a specific order. So no matter what the pattern is or how many times it changes it still constitutes a key of some sort.

Also if you get to the advance stages of theory training you will learn that composers do not modulate purely for modulations sake. Their is certain ways you should be doing it and again it is not arbitrary. It is just one of the ways a composer can help tell the story of the music he is making.

Not the answer you're looking for? Browse other questions tagged theory scales composition key atonal or ask your own question.

9
How to determine what key changes are appropriate?
9
Changing key in a song convincingly
2
How to find the key of a song without a pitch reference?
10
Can any song in a major key be performed in C major?
30
Is there any way to find a key of song somehow mathematically/algorithmically?
3
How to discern the key/tonic when they are key changes in song
9
When we play the C mixolydian mode, are we still in the key of C?
9
Can the same song be written in a minor key and major key with the progression written differently?