Can one measure the “distance” between chords? If so, how?

I was reading an article an the author gave the following sequence of chords: C A7 Dm G C

I would like to measure the "distance" if there is such a thing between C and A7. Can this be done?

In other words, I am asking if there are any prominent models that somehow quantify relationships between chords in terms of a metric space (i.e. with a distance function).

The simplest metric, and probably the most frequently used (even if only implicitly), is to count the number of steps between the chords' roots along a one-dimensional line of fifths (or the circle of fifths, if you permit enharmonics and modular arithmetic). I say this is the most frequently used because chord progressions where the root ascends or descends by a fourth or a fifth (which have a distance of one by this metric) are the most frequently used in many styles of Western music, indicating that these chords are "close" in some sense. In your progression, this metric would yield distances of 3, 1, 1, 1. This metric has the property that it plays nicely with tonal music, since the tonic/dominant relation that defines tonality has a distance of one. And even if you start to stray slightly from chords that are in your current key, you will end up visiting "closely-related" keys. Also, because this metric looks only at roots, it doesn't inherently care about chord quality (major vs. minor) or extensions (sevenths, ninths, etc).

Dom has already mentioned a second possible metric: the number of common tones (or more precisely, the number of uncommon tones). The more tones two chords have in common, the "closer" they are considered. This works especially well if you plot chords as shapes in a Tonnetz grid. In this case, all of your triads are seen as triangles. The "closest" chords by this metric are those that share two common tones, which results in graphically "flipping" the triangle along one of its three edges. This would imply, for example, that the C major chord is equally close to C minor, E minor, and A minor (a single flip will always turn a major into a minor, and vice versa). In Neo-Riemannian theory, these types of transformations are even named: Parallel (P), Leading Tone (L), and Relative (R), respectively. There are more complex transformations between chords containing only a single common tone. Ignoring the 7th for simplicity, this metric would give your progression the following distances: 1, 2, 2, 2. This metric is less restricted by tonality, and more focused on voice leading. It can more easily explain the "closeness" of chords like C and A♭ which would traditionally be far-removed. As such, it is more suited to Romantic music, where these traditionally-distant progressions are more common. This metric also inherently accommodates different chord types.

There is an even more complex metric that has been developed by Dmitri Tymoczko in A Geometry of Music, involving n-dimensional orbifolds, but I cannot claim to be very familiar with it. It is well-suited to making you forget about music, and focus on mathematical abstractions.

The construct of a Euclidean distance is not really relevant as it is meant to measure a physical distance. Group theoretic arguments are meant to talk about relationships between chordal progressions but are built on a network or lattice structure. When we use lattices we have many different measures of distance each of which has a meaning relevant to the network under examination.

We could also look at the construct of temporal similarity. Here we write each chord in terms of its mathematical form (sine waves, etc) and then look at distances between the signals over time. So, in the end, the use of the term distance needs more definition before we can really answer the question.

This is a big part of voice leading specifically where you look for common tones between chords in the harmony and how you can take advantage of them when transitioning between them.

It's not really a formula as much as it is just assessing how related the two chords are. The basic idea is to just look what notes if any are common and if the notes move by how much. 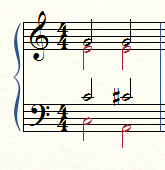 As you can see, 2 of the notes don't move. One note, in this case the tenor, moves chromatically upwards which is very little movement and the the other to move is the bass note by 3rd which is a little more in distance. However you should note that there is typically more movement in the bass line.

Like I said, it's not a formula, but it's a very good way to assess what you are talking about.

There are other ways to define harmonic "distance". For instance, one could use the 5-limit lattice as a "map" on which the harmonic landscape unfolds by fifths (W-E) and thirds (N-S). Then we could track the chord sequence as it moves, quite literally, on the map. 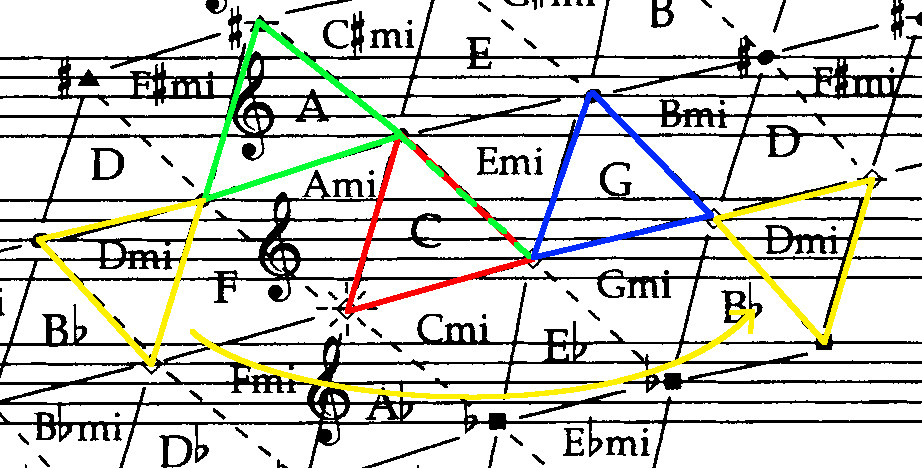 The only problem is that of the ii chord, which serves a dual function and actually transports us across the map in an instant (from subdominant "west" to dominant "east"). (See 'Harmonic Experience' by W. A. Mathieu, for example.)

Another, albeit closely related, way to view the distance is to use neo-Riemannian theory and the tonnetz. Then the distance could be tracked in much the same way and perhaps defined as the number of transformations necessary to go from one chord to the next. 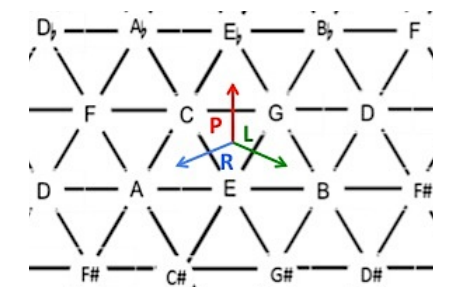 In the case of C -> A we would need two transformations: R and P.

In a similar article by Seth Monahan titled "Voice-Leading Energetics in Wagner's 'Tristan Idiom,'" the author talks about "kinetic displacement metrics," or "KDMs." What's important here (and what is different from Cohn's DVLS) is that Monahan measures direction, as well.

Let's go back to the example where C major moves to G major. In this case, we can understand that there is a common-tone G between the two chords (thus a move of 0 half steps); the other voices move from C to B and from E to D. Since C to B is down one half step (-1) and E to D is down a whole step (-2 half steps), we add these distances together to see that this progression has a KDM of -3. As with Cohn's DVLS, a larger absolute value suggests a greater distance between two chords.

For anyone interested in the cognitive realities of these distances, I suggest "Perceived Triad Distance: Evidence Supporting the Psychological Reality of Neo-Riemannian Transformations" by Carol Krumhansl.

16
“The intervals considered dissonant have changed since the 'Middle Ages'”; How so?
11
How do I correctly borrow chords from one key to another?
2
How does one measure the interval between two pitches?
4
Calculating the distance of chords
1
Why there is a single-flat key signature for a F major triad?
4
Minor Key (and other key?) Roman Numeral Analysis
0
Four chords in one measure, 3/4 time signature
0
Rostropovich's description of the intrinsic “feeling” of the different musical keys
10
In what language-level in Chomsky's hierarchy would the chord-progressions of classical music be categorized?