Should tabla drum produce any buzzing?

Earlier today I was trying out two tabla drum sets in a music shop and I noticed that both sets they had were producing a buzzing sound while being played. I am no tabla player but I have been playing different instruments (guitar and various other percussion instruments) for ~15 years, enough to know that I don't like playing on "faulty" instruments.

The guy at the music store insisted that the buzzing on one of the sets was not normal (as it was more present), but that the other tabla drum was perfect (the buzz on that one was a bit more subtle but I could still hear it very clearly). I disagreed with him, and he told me that I was overly picky and unreasonable about that. The price of both sets was ~300 euro.

He also said that the first one needed to be tuned/tightened (which I agreed with) and that the string beneath the "Keenar" part (image below) was loose and after the drum gets tightened the sound would go away. So he fiddled with the drum a bit and only made it worse and the buzzing was even more present. 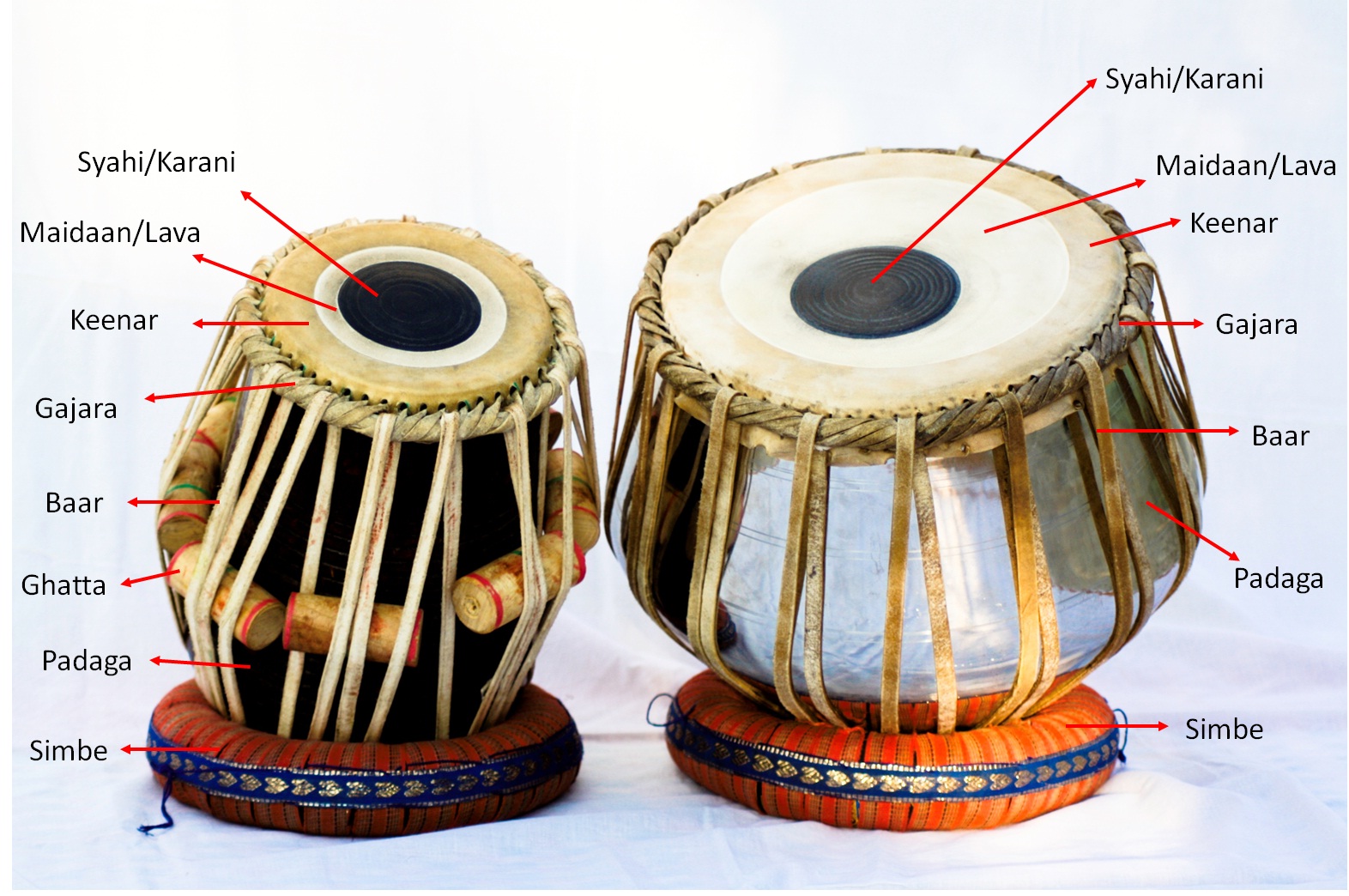 So I googled it up a bit and all the articles/videos that I found stated that there should be no buzzing at all.

Is tabla drum supposed to produce any buzzing at all, is it normal or not? Was I really being unreasonable about this?

According to an article I found (no longer available, was on aacm.org site), buzz can be a matter of taste:

It is a matter of taste, but some people want a small amount of buzz in their tabla. This is called jawari - similar to the jawari buzz of a sitar or tanpura. A loud buzz is annoying and can signify that the head is on its way out. The buzz is often caused by a loose section of the gob (black spot). If you hold the drum up to the light and can see a small section that seems to be loose and vibrating on its own, you can try putting a small dab of crazy glue or nail polish right on that spot. If that is the culprit this will kill the buzz. Do not put glue or polish over the entire gob or you will kill the resonance of the entire drum.

The website appears to be a North Indian college of sorts, which suggests a certain degree of knowledge and authority.

Also, if these are demo instruments in a shop, there's a good chance they've been used and abused by numerous customers carelessly banging on them.

Shop around if you can; the guy at this shop doesn't sound too helpful. And no, I don't think you're being unreasonable at all. I'm not sure if I'm allowed to post commercial links (I've no affiliation whatsoever), but here's an example selection within your current budget of 300 Euros.

The buzz in the Tabla or Bayan can be early sign of the Syahi deteriorating.

The drum with buzz may not produce long sustaining Tones.

Also consider checking the quality of wood(there may be cracks concealed), weight of Bayan(3-4 kg), quality of wounding strings, diameter of the Tabla, Thickness of skin etc.

I am not greatly experienced in tabla, but am experienced enough to have witnessed that some times, the buzzing can exist when a tabla is out of tune that then can be fixed by tuning. (Like the salesman tried to do.) I would not buy tabla that were buzzing, but if I owned buzzing tabla I would try the advice in the other answers. In addition I would check and work on tuning the drum.

There is a thread/string that seperates the drum heads. Sometimes this can get loose and cause a buzzing sound too. This would also limit the clarity of the bright tone/note that comes from striking the outer rim. I have seen my teacher insert a credit card inbetween the skins to adjust the position of the thread. Its not something that I would personally feel comfortable doing to someone else's instrument though.

Buzz is not acceptable, it is sign of loose grain the the Shyai part of Tabla. So if you hit such tabla with more force that grain may come out which disturbs the togetherness of Shyai grains so slowly whole Shyai may wipe out in the form of small grains.

Musically it does not sounds good. There is no concept called Jawari in the Tabla. It is for string instruments. Tabla should be without any buzz.

Not the answer you're looking for? Browse other questions tagged tuning drums maintenance percussion tabla or ask your own question.

22
How to properly tune drum heads?
7
Can playing in cold weather damage a drum set / skins?
11
Is there any way i can increase the life of my drum sticks?
11
How to play Tabla in a music composition?
0
What are the impications of Varnishing Drum Shells?
7
Cork in the base of a violin's chin rest
5
How are the notes organized on a tongue drum?
11
What is the effect/role of Syahi on the Tabla skins?
3
Why does small tabla daaya breaks some time?