How do I maintain flamenco guitar fingernails?

Any flamenco guitarists out there? How do you keep the fingernails in such great shape? Is the difference that much better with the strumming hand's fingernails being longer?

I play Flamenco guitar.
Flamenco guitar players tend to keep their nails a little bit longer but not that long. Because if you keep long nails, you will hear the friction of your nails with the strings.
Not to mention that long nails will make it really difficult to play the guitar. Try to play tirando and apoyando with long nails and you will know.

Check this video for example of Tomatito playing Bulería to see the importance of the thumb.

In flamenco, there are pros and cons to both short and long nails. Though most famous soloist flamenco guitarists tend to keep shorter nails (slightly longer than the flesh), there are many who don't. One example (though an extreme one) is Moraito Chico, who is widely regarded as one of the greats but had nails nothing short of bear claws (which you can see in any video of him performing live). There is an extent to which the length of the nail is just a matter of preferences and of one's one anatomy (length of the arm, of the fingers, etc.). That being said, as a general rule of thumb, the longer the nails, the easier and the more powerful your rasgueados will be; the shorter the nails, the easier tirando, picado and arpeggios will be. In other words, there is a trade-off here: longer nails may be of help if you have to accompany dancers (since a lot of rasgueados are involved in accompaniement) but they made be a hindrance for playing solo pieces.

As for nail care, the techniques used by the locals in Andalucia range from super glue to shoe polish and everything in between. A common technique used to harden the nails is the following: one layer of acrylic powder, one layer of super glue, let dry, repeat until hard enough. I've also seen some use cigarette paper (and even toilet paper) instead of acrylic powder. Whether this is the best of going about it, probably not (even just health wise), but it is a widely used method by Andalucian flamenco guitarists. As for the shape of the nails, the same rules apply as for classical guitar: use a file to shape a gentle curve following the shape of the fingertip. Make sure you file at all different angles (and not just head-on the nail) but only file in one direction (and not back and forth). When finished, all of the tip of your nail should feel smooth. If you slide your finger over the tip of the nail and feel resistance, then more filing is needed.

it certainly is. you want to keep them a bit longer than the flesh of the finger. the thumb is much longer. you can experiment with that and see what works for you. the quality of the sound produced is significantly better. you will notice the difference for sure. it also influences the quality and ease of playing the guitar, at least from my personal experience.

make sure you cut the nails in a bit of a diagonal. if you are a righty, this means you cut each nail from the left side of each finger - upward.

keep filing the nails regularly with your practice.

I realize that when I replied earlier I didn't really answer the last part of your question, which is whether it makes a difference to have long nails on the strumming hand - I simply assumed they are required! At one point in classical guitar technique there was a controversy over playing with nails or without, with the nail-less camp feeling the sound was warmer and more expressive, and the nails crowd going for variety of tone and volume. Since this was back in the day before amplification, nails won out - no-one could hear the nail-less players unless they were sitting next to them ;-) But given that most flamenco playing gets amplified these days, you could be the first to play without nails - try it! - but you'd be giving up the "punch" and clarity they give the sound, and clear rhythm is most of the battle in flamenco guitar - I think you'd be disappointed with the results.

So, about maintenance - flamenco does seem to require nails, but it is hell on them - you could be backing dancers and singers, and you're always playing with a lot of energy, right? ;-) And the "alzapua" technique brutalizes the thumbnail. The first thing is to avoid playing with damaged nails - playing with abrasion tends to make things worse - keep them smooth, with very high-grade emery paper or boards - a steel file is good to keep around for the left hand (which, of course, should be very short). If you're playing a lot, you'll be filing every day.

But to be honest, in forty years of nail care (the first thirty doing classical guitar), the thing that made the biggest difference was a product called "Onymyrrhe" (Google it) - my nails are simply "tougher" - since I started using it, I've had minor accidents that used to snap the entire nail off - now it bends, but hangs in there (so to speak) - OK, that can hurt, but I've still have my nail! And they wear much more slowly, so I still have something left after 2 hours of rehearsal with dancers and singers.

But you should also know that flamenco guitarists regularly use artificial nails (my partner, who does construction work, relies on his manicurist, and they're rock solid and predictable), or combinations of super glue and tissue paper (and the like) to strengthen the thumbnail, if their natural nails aren't, well, "tough as nails". I've made a number of repairs with super glue and tissue paper that got me through gigs.

I recommend the book and DVD Pumping Nylon by Scott Tennant, which has a very good section on nail shaping and how to play with your nails.

I've been incorporating flamenco technique into my rock style (on steel strings) for the past 10 years and I've learned a few things that help keep the nail stronger.

At first I was cutting the nails into points at about a 60-degree angle. I coated them with "Nail strengthener" (the stuff with little fibers in it) and then a thick coat of black or dark-purple polish. I figured if I'm chipping away at the polish, then the nail underneath should stay fairly intact. Also the sharp points meant that the breaks happened just at the tip, so there was enough nail left to clip a little shallower and keep going.

But a job in foodservice meant that the polish had to go. And I discovered that the nails looked unhealthy. So I discovered that "natural substances" are much better. Hand creams, lotions: good for the skin == good for the nails. There's a hand cream called "Gloves in a Bottle" that's particularly good (it's designed for Knitters, for whom friction == blisters). For a nice matte-finished, use a drop of olive oil. For a glossy finish: glycerin. Being natural, they bind less aggressively to the surface of the nail; they will wash off and need to be reapplied. But they help insulate the surface of the nail from impacts, same as the polish was supposed to do.

Also filing is very important. there's a technique to it that might not be obvious. [My source for this is a Beautician's handbook from the 1950s.] Once cut close to the desired shape, you should put down the scissors (clippers) and pick up the file. You want to file from the edge to the tip, only in one direction: so each nail consists of two "blades". When you're almost done, switch from a perpendicular file-angle to a bevelled angle (angle the file a little "under the nail" to remove those little fibers and help the edge curl-under slightly).

And eventually I got rid of the points in favor of a gentle curve following the shape of the fingertip. Too much attack was interfering with speed: to go super-fast you have to take into account the fact that the string is already vibrating, so only a slight graze is needed to articulate and add more energy to the vibration. The shallow curve means that your fingertips can be more aware of their proximity to the string and can make the necessary micro-corrections of angle and position with less conscious attention.

In Sor's Method there's an illustration of the hand with a number of lines defining the ideal shape of the nail for the ideal of each finger striking the string at its proper angle. I had to deviate slightly from the picture since my ring-fingers curve a little more than the image. 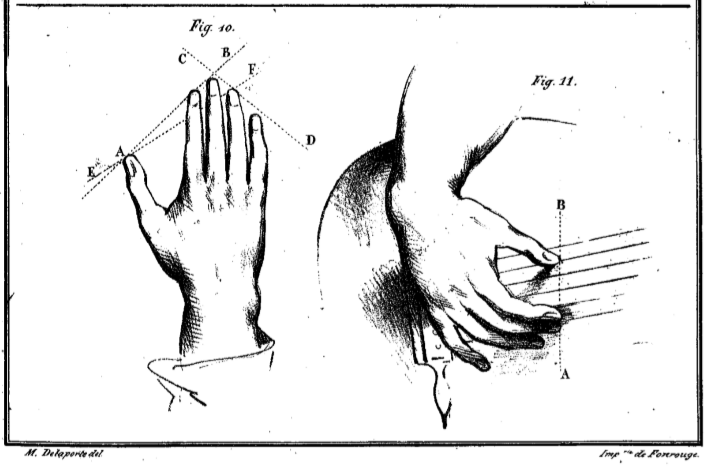 Very interesting thread. When I first started out I taped on a big false thumb nail made of plastic just for the volume and attack. Now I play flatpicking style on mostly electric and steel strung acoustic. I also play bass and the challenge is getting the nails long enough to flatpick and short enough to avoid them striking the bass strings and giving too much attack when I want a warm tone. Anyway, superglue and acrylic is the way to go. One thing to avoid is affecting the weight too much. You want to go for the thinnest and lightest but most durable construction possible. As with most things in life it will be a compromise. Don't go for anything too permanent though because it will funk up the real nail which you should let breathe for a couple days after a weekend of gigs for example.

Use fakes like girls wear. they are great , can be shaped and if you break one you just glue on another one. I do use my real thumb nail but I can play 1/16th picato at 190 bpm with fakes no problem. Sweet.

For me it was very simple. My nails kept breaking. I just stopped dairy and believe it or not. They rarely every break now!!! Just stop all dairy products

Not the answer you're looking for? Browse other questions tagged guitar flamenco or ask your own question.

4
Is there a good source of flamenco backing tracks for practice?
4
Strength / speed exercises for rasgueado
3
Classical vs. Flamenco techniques ... differences?
0
Flamenco - How to find band mates that appreciate it and in a new town?
5
Which guitar to pick for playing flamenco?
1
Is Playing Classical Guitar with Fingers PI a Bad Habit?
2
Starting over with Flamenco in my Soul
3
Are short finger nails on the strumming hand not uncommon in flamenco and classical guitar?
1
Are castanets used in tango music?