Why are Lutes so hard to tune?

It has been mentioned to me that a Lute player spends half his time tuning his instrument and the other half changing strings. Why is this so? What makes a lute a tuning nightmare?

Check out this picture: 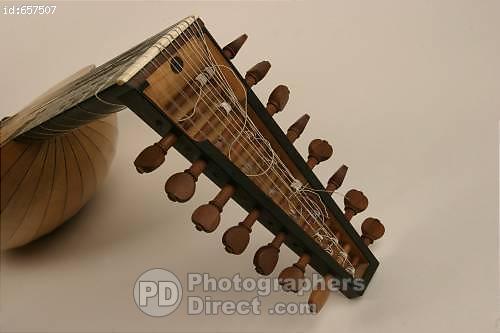 If you've ever tuned with pegs, you know that tuning pegs can be very tedious to tune with. A violin, viola, or cello often has pegs, but they have only four strings and most players will put fine tuners at the tailpiece end, which makes it much easier.

Just tuning a 12-string guitar with tuning machines can take more than twice as long as tuning a 6-string with machines. A 12-string with pegs would be a nightmare, and that's pretty much what a lute is, except it could have more than 12 strings. The one pictured has 15 strings.

In case the picture doesn't make it clear, if one were to change the strings on such a lute, it would take forever also. Notice how the strings block access to the tuning pegs. You have to put the strings on in the right order, and even if you do it's pretty tedious to wind and/or tie new strings onto a peg.

When you tune any string instrument, the tension on each string slightly changes the shape of the instrument (the neck, headstock, bridge, etc.) which changes the tuning of the other strings. So you have to make multiple passes of tuning. The more strings you tune, the more the first string you tuned goes out of tune. I'd expect to make five passes on a lute like this just for a maintenance tuning. For a first tune-up after restringing, I'd want to have a good miniseries ready to watch out of the corner of my eye while I do it.

Modern guitars are either strung with nylon strings or steel strings. Lutes are traditionally strung with strings made from sheep gut. Sheep gut expands or contracts a great deal with changes in humidity and temperature, much more so than with nylon strings or steel strings. Where I live in Atlanta, Georgia, USA, if the concert hall's central air conditioning or heating system turns on in the middle of the concert, the lute goes noticeably out of tune very quickly. The gut-stringed instruments require a considerable amount of time for re-tuning between pieces.

Not the answer you're looking for? Browse other questions tagged lute or ask your own question.

5
Is it normal for an Oud/Lute not keeping in tune?

3
What kind of lute is this, which strings does it use and to which notes are they tuned?
5
Is it normal for an Oud/Lute not keeping in tune?
0
Lute with L shaped neck
6
Why are so many pieces originally written for the lute now arranged for guitar?
8
Why is Western European music harmonically driven?