In my Chamber Orchestra, we are learning about chord inversions but unfortunately, I missed the major lesson. Based off of research I have done, here's what I got from it:

What I am still lacking knowledge in:

How to find Tonic chords in a key?

Does it have the tonic note in the chord? If you are in C Major and there is a C note that is not non chordal then it can only be one of three chords one of them being the tonic (Others are IV and vi.)

How to identify a Tonic chord by notes?

Does it have the the tonic note with the third and the fifth above that notes in the chord? Or in other words if you are in C Major does it have C - E and G in the chord?

The second part of the question I have answered on this site before.

What I am still lacking knowledge in:

With you triads the notation works as follows. Lets say you are in C Major and you are working with the tonic chord. If you have a root position chord you have the notes C-E-G.

Next up we have the triad in second inversion. Here we would have the notes G-C-E which would give us the intervals of a fourth and also a sixth (G-C vs G-E) Hence the notation of 6/4

The notation for the four note chords work as follows. If you have the dominant seventh chord of C Major you have the notes G-B-D-F.

If it is in root position you have a third from the root, a fifth and a seventh. That gives us the notation 7/5/3 or more commonly just V7.

If that same chord is first inversion we would have the notes B-D-F-G this would give us the intervals of a third, a fifth and a sixth. This is why we have the notation of 6/5/3 or more commonly just V6/5

Lastly we have the third inversions. In our example we would have the notes F-G-B-D which would give us the interval of a second, a fourth and a sixth. Again we cannot call it 6/4 so we rather just call the inversion 4/2.

To begin with, they are not fractions. They are figured bass symbols. @NeilMeyer has explained the mechanics; I have attached a chart which I created for a student of mine. 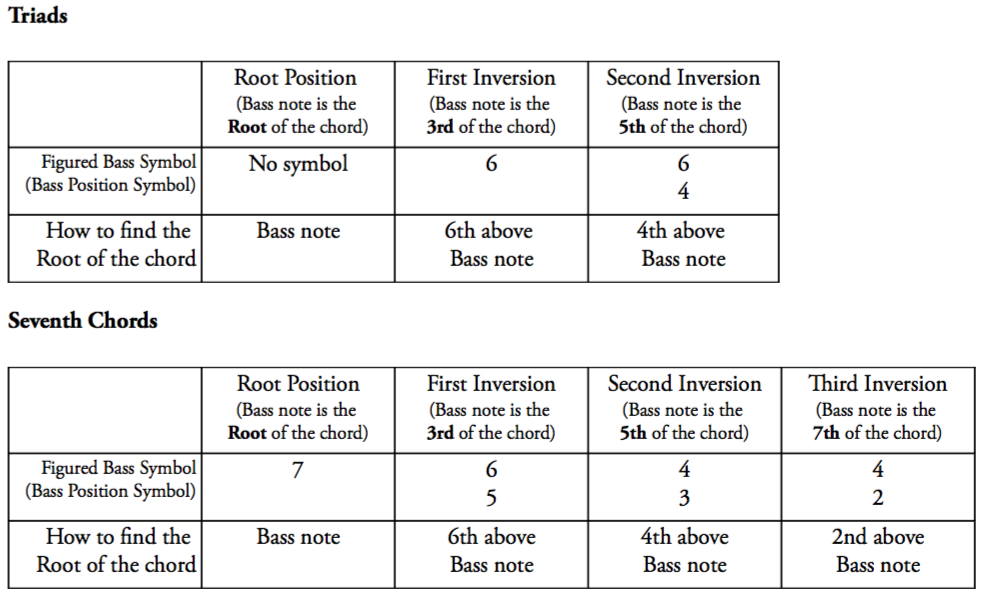 These are the basic symbols for the diatonic chords found within any given key. There are additional symbols for sharping or flatting certain notes and intervals to make chords outside the key.

Not the answer you're looking for? Browse other questions tagged chord-theory chord-inversions or ask your own question.

10
Is there any theory to decide a set of plausible chords per measure where a whole melody of a song is given?
1
Exhaustive list of chord (at least triad and dom7) functions for a software ear training tool
0
Where To Start With Contemporary Theory
2
Learning to master keys by using association with music
4
Available Tensions for Modal Scale Degrees
4
Analyzing Hisaishi Joe's Song "Reprise"
4
Chord inversions and consonance
5
Does every chord have inversions?
1
How to vary chord inversions properly?
0
What is the relationship between the 5th and minor 7th in dominant chords?