I recorded this cover for feedback/critique:

One valid point raised was about 'plosives' which I guess is the way some consonants 'catch' at the start of words.

I don't really know what to do about them, how can they best be avoided? I'm recording with a 4-channel mixer, using line-out from my guitar and a SM58 mic probably 4-6" from my mouth, into Audacity. Other than levelling the audio and guitar this is the raw unprocessed recording.

ps: how bad are they in this recording? (leave a comment, it's not part of the question)

Bad-sounding sibilants and plosives have one thing in common: they are unvoiced. That means that your voice box is not vibrating when you say them - they are created just with air moving past the lips and tongue. One way to avoid bad sibilant and plosive sounds is to substitute their voiced versions:

So for instance, The Star Spangled Banner might start off more like, "Oh, shay can you zhee..." Now you're probably thinking "That's going to ruin my lyrics!" (or maybe "Thadz going do ruin my lyricsh!", and you have a good point. The trick is to practice so that you are kind of half-voicing those consonants. Along with the fact that you are singing and the subtle differences between ears and microphones, sounds halfway between s and z or t and d actually sound correct in context.

So between a pop filter, a de-esser (which is a necessary evil signal processor for dealing with sibilants), and most of all, practiced technique (it's alway practice, isn't it?), you can get great vocal recordings.

One source: The Craft Of Singing (book)

Also: Singing Sibilance and How to Solve It (YouTube video)

Use a 'plosive catcher',a.k.a. 'pop-shield', which is a gauze or such like between the mouth and the mic. There are lots of ideas on youtube to diy. I made mine from embroidery rings and a piece from a pair of tights. It just stops the little explosion of air produced on 'B', 'D' and 'P' being picked up during recording.

The classic do-it-yourself pop filter is a bent piece of coat hanger wire stuffed inside a woman's nylon pantyhose material (stretched taught), mounted on the microphone stand and suspended between the microphone and the singer's mouth. It works. 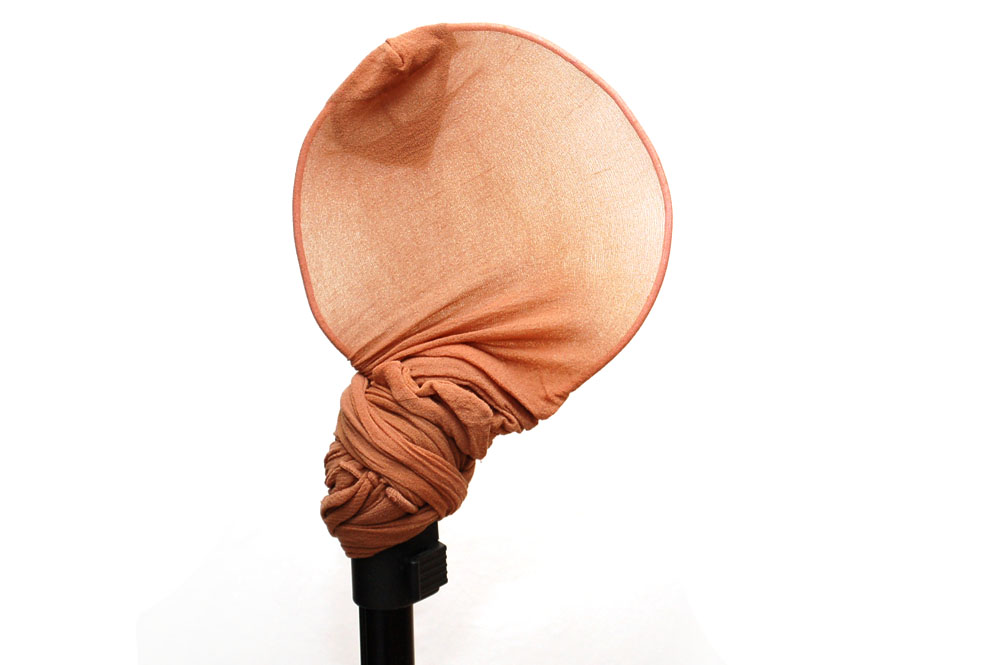 The use of the nylon pantyhose pop filter became very widespread after it was featured on all the microphones in the 1985 "We are the World" recording session video from the USA for Africa project (which contributed to Live Aid) -- produced by Quincy Jones.

Here is the video.

I was studying recording studio engineering and producing at university at the time and we had a discussion about this in class.

I am surprised that nobody has mentioned using a high-pass filter or shelving EQ on your vocal track to get rid of these nasty plosives, so here I am.

In most cases, a steep roll off of all frequencies below around 100 to 150 hz should get rid of the pop without affecting the sound of the vocal too much. This article explains how you can take this even further by adjusting the frequency with automation, but I would not take it that far unless you really have to.

The other answers about pop-filters are correct, but if your audio is already recorded, this won't really help you.

Some other answers also address sibilance, which is another common issue, but is outside of the scope of this question.

Not the answer you're looking for? Browse other questions tagged voice recording homerecording or ask your own question.

6
How should a pop shield be set up?

8
Pop filters and dealing with plosives in live performance
26
Every time I press 'record' I forget how to play and sing!
2
What recording setup for casual “recording in your bedroom” singer-songwriter?