I'm learning to play A Thousand Miles by Vanessa Carlton, I'm slowly learning to read music (self taught) but I have two different sheets for the song and one has a flat on the E staff with the tail going up to the G staff. The other one has a sharp sign on the G staff. Apparently the 5th note is A sharp but it's not on the same line as the sharp or the flat sign which wouldn't make sense anyway if it was. Is this right or should it be played as a natural? 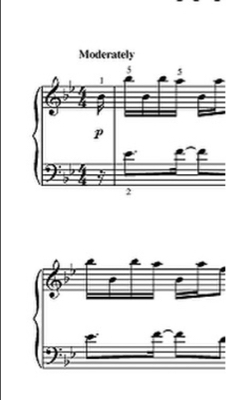 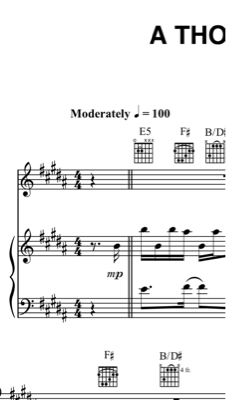 What you have are two arrangements of the same piece in two different keys. The second version is a semitone higher than the first - meaning every note is shifted down one piano-key (if you also use the black notes.) Try playing both exactly as written, and you'll see you have the same tune, just slightly lower in the first instance.

So, the first four notes in version 1 are Bb, Bb, Bb, A whereas in the second version, they are B, B, B, A#. Same pattern, same tune, just one piano-key higher. (So "Apparently the 5th note is A sharp" is only true for the second sheet!)

Now, a little clarification regarding key signatures in general - the octave a flat or sharp sign is shown on in the key signature is irrelevant. If you have a Bb in the key signature, the it affects all B's - whichever octave they're in. I think that may help clear up your confusion! This question may also help clarify exactly what the key signiture means.

Most music is in a particular "key," which means that there is a central pitch which the melody and harmony revolve around. And octave on the piano includes 12 different pitches, but only 7 are used most of the time -- which set of 7 depends on the key of the piece.

The purpose of the key signature (the set of flats or sharps on the left) is to inform the player of which set of 7 pitches is being used -- there is one for each letter name, but some will be natural, and some flat or sharp. For instance, on the one you have posted on the left, the 7 pitches used are B-flat, C, D, E-flat, F, G, and A. So the two flats at the left edge are meant to let you know that if there is a written B, it should be played as a B-flat, and the same for E. That particular set of pitches will draw the listener's ear to its natural resting point (also called "tonic"), which in this case, is B-flat. So that transcription would be said to be in the "Key of B-Flat."

Hopefully that helps you understand the why.

I do want to make one suggestion for you, though, as you're trying to learn. Of course, if you're able, I strongly recommend hiring a teacher, as books can't find problems that you might be having and not know about, but I also know that sometime timing, money, etc., can make a difference. So I would try, if I were you, to find a VERY basic text to read about the elements of written music so you can more precisely describe your concerns as you ask questions here. For example, I wasn't sure what you meant at first when you used phrases like "G staff" and "E staff." I eventually figured out what you meant, but the word "staff" refers to the SET of 5 lines (and the 4 spaces in between) that we use for writing music; so a staff does not have a letter name; however, the lines and spaces can, so perhaps a better way to word what you meant would be G's space, or just G (i.e. a sharp sign for G, and a flat sign for E). That may make it a bit easier for you to get good answers.

If I had to guess, I'd say that one of these charts was meant for playing with horn ensembles, the other is for guitar, solo.

As for your specific question about the "A" note...you are misunderstanding what a key signature does, and how to read it. In the left-hand picture, the key signature says "unless otherwise notated, play all E notes as Eb, and all B notes as Bb. That includes Eb and Bb in other octaves as well.

Not the answer you're looking for? Browse other questions tagged sheet-music accidentals transposition or ask your own question.

15
What is a key signature?

39
Why is music theory built so tightly around the C Major scale?
4
Which tone names should I learn on a transposing instrument like a saxophone?
7
Double- to single-sharp notation in lilypond - how to get rid of natural symbol?
2
Sight reading piano pieces with sharp or flat key signatures using intervals
14
What do these symbols mean?
6
Having trouble with accidentals - Note-for-note vs traditional?
6
Doubt about accidental