Motivated by Why might one want to record a drum accompaniment electronically without using regular or electronic drumheads and cymbals to drum on?

What are the disadvantages of using an electronic drumset? In other words, when you choose acoustic over electronic, what are the reasons?

To be clear about what we are talking about, this is an electronic drum set: 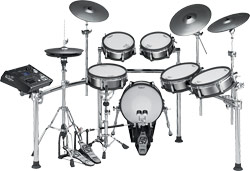 There are other ways to generate sounds that function as drums in a music production, including drum machines and several different kinds of software. This answer will not be about those. For the sake of anyone curious and reading about this who does not know much about electronic drum sets, a brief description follows.

An electronic drum set is composed of a set of pads that are mounted and arranged like the pieces of a drum kit, and a sound module (commonly called a "brain") that all of the pads are connected to. A drummer sits in front of the electronic kit like it's a regular set of drums and strikes the pads with regular drum sticks (or with a kick pedal beater). The pad strikes are electronically transmitted to the sound module, which produces synthesized or sampled drum sounds corresponding to the struck pads. The sound module has outputs that are routed to an amplifier, headphones, or a PA system so they can be heard and recorded. Sound modules also commonly (possibly always, I haven't seen one that doesn't do this) provide MIDI output of each pad strike which can be used to trigger appropriate sounds (or anything else) in a drum machine, synthesizer, or software.

With all of that in mind, I'm going to add to your question:

Why would anyone ever use an electronic drum set?

I can think of two things one can do with an electronic drum set:

First, understand that electronic drums main selling point is they aren't as loud as acoustic drums.

The common consensus is to use acoustic drums if you can.

Still, I have gotten noise complaints with electric kits in an apartment if there's someone underneath you who may be able to hear the kick pedal being stomped on.

1) Can't practice same techniques as on acoustic kit (rim-shots, cross-stick, buzz-rolls); the surfaces are more bouncy which can make you reliant on fingers and no wrist. You'll have to re-learn wrist strokes like I did :<

2) They sound different Let me demonstrate this with the intro of my original song:

3) Jazz - Does not work. You cannot get good dynamic range when practicing jazz with these. You can get away with rock / punk / metal, but jazz will not work.

So my solution for practicing jazz with real feel in an apartment?

I got myself a pair of Zildjian L80 Cymbals. However, these are still kind of loud and you would still need to use mesh pads as drum heads on your acoustic set.

sound. they're a synthesizer, not acoustic instruments. the sound just won't be as good. also, acoustic drums will have more subtle sounds that digital drums can't do.

Not the answer you're looking for? Browse other questions tagged drum-kits electronic-drumset acoustic-drumset or ask your own question.

2
Why might one want to record a drum accompaniment electronically without using regular or electronic drumheads and cymbals to drum on?