Orchestration question: when can basses get muddy?

I have a passage that I've composed at quarter note = 175, containing a melody that contains mostly eighth notes and quarter notes, all in pizzicato. The cello and bass parts are doubling each other in octaves, except that how I have it currently is that the eighth notes are kept in the cello line, and the basses are only playing the strong beats as quarter notes. E.g., see the image below (in written pitch). 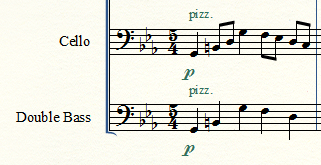 The fact that it's pizzicato should help with muddiness a bit. If the section were arco, I would say that your current version is probably best if you don't want the passage to get too logy or muddy, but when it's pizz I don't think it's as much of a problem.

Is this orchestral or chamber? If it's just one or two cellos and one or two basses, I think it's even less of an issue—especially if it's one to a part. In that case I would double the line with eighth notes without compunction. If it's orchestral and there will be many cellos and basses, I would lean back toward what you've written, OR possibly have one bass double the cellos exactly as a solo, while the other basses play what you've written. That way you'll get the octave doubling without the loginess.

Is your musical example written pitch or sounding pitch?

The best advice is to send that gesture written a few different ways to a bassist / cellist and have them record themselves playing it so you can hear how it actually sounds at that tempo. Only then can you decide how you feel about it.

Also think about how heavy you want your sound to be. Notating the music in 5/4 instead of 5/8 puts the emphasis on each individual quarter note, which will give you a much more pressing sound. Also, having the basses play on every quarter note will give you a much heavier / darker sound as well. If you want a much lighter sound, considering re-notating in 5/8 and having the basses only play on the first and third beats to accentuate the rhythmic division of the meter.

Not the answer you're looking for? Browse other questions tagged orchestration or ask your own question.

2
Should I raise this chord up an octave?
1
How should I write a tutti chord?
2
Orchestration question: Should I change which woodwinds get which lines?
1
Is there a certain way to voice chords for an orchestration?
11
Double basses in Beethoven's Eroica
1
Doubling notes in orchestration - inversions and extensions
2
how can I study orchestration methods for electric guitar?