I have often heard that you should never plug a bass guitar into a standard guitar amp. Granted it's not going to sound its best but it can supposedly be detrimental to the amp or speakers. I've heard that the speakers aren't made to tolerate such low frequencies.

Is this actually true? And if it is true, would I be correct in assuming that octaver and synth effect pedals that can produce sounds up to 2 octaves lower than the note being played can also break your equipment? Is it better to use a keyboard amp for such effects?

I haven't found any comments on this question online from someone who actually knows a lot about amplifier design. I also have not been able to find any horror stories such as "I did this once and destroyed my amp/speaker", which I would expect to find if it were actually an issue. I have found many mentions of professional bass players using guitar amps and cabinets, such as this list from TalkBass:

The dude from High on Fire

The dude from Death From Above 1979

The question really is, can an unexpected type of signal (i.e., one with lowest frequency an octave lower than designed for) lead to a higher continuous or peak power output of an amplifier? I would think a well-designed amplifier would be designed to operate within specification regardless of the input it is given, and also should have a safety margin in case of unexpected behavior. Most guitar amps and speaker cabinet pairings seem to fit this criteria.

In the case of an amplifier and speaker pairing where the amp can damage the speaker, using a guitar alone with no effects would not be any safer than using a bass or low frequency effects. Hitting a guitar or unplugging the cable can produce very low frequency impulses and unplugging a cable going into a cranked amp is a problem no matter what the instrument, amp, or speaker cabinet are.

Based on that, I think this is an urban legend. If it were true, guitar amplifier manuals would have a warning not to plug in keyboards, basses or other low-frequency sources. Pitch-shift effect makers would have warnings against using extended low frequencies through guitar amps. And we would see anecdotes all over about people damaging their guitar amps or speakers because they used such-and-such through it and NEVER DO THAT and etc. Instead all we see are people writing "I think it could damage the speaker".

Edit - caveat: Plugging a bass amplifier into a guitar speaker cabinet could be very bad for the guitar cabinet, depending on the amp. But that would be true even if you played a guitar though that rig. It's not the low end of the instrument that's a problem, it's the mis-matching of amp and cabinet. There is a Celestion video which confirms that hooking a bass amp to a guitar speaker cabinet is not a good idea.

From the Eminence web site (emphasis mine):

A transducer might be able to handle 1,000W from a thermal perspective, but would fail long before that level was reached from a mechanical issue such as the coil hitting the back plate, the coil coming out of the gap, the cone buckling from too much outward movement, or the spider bottoming on the top plate. The most common cause of such a failure would be asking the speaker to produce more low frequencies than it could mechanically produce at the rated power. Be sure to consider the suggested usable frequency range and the Xlim parameter in conjunction with the power rating to avoid such failures.

While that would seem to indicate putting lower than usual frequencies into the input of a guitar amp could be dangerous for the driver(s) being driven by that amp, most guitar amp designs have limitations on the output frequencies and power that in practice make it hard to damage a guitar speaker that is properly matched with a guitar amplifier. Again, plugging a guitar speaker cabinet into a bass amplifier would be unsafe for the exact reason quoted from the Eminence site. Note that all but the smallest of bass amps will put out more than 50 Watts, with most putting out more than 100 Watts up to thousands of Watts. A 1x12 guitar speaker enclosure would not normally be rated for more than a 50 Watt amp, so just on power output alone, it's better to not use a bass amp with guitar speakers.

As far as I know, it's not a case of being able to tolerate it, it's more if the speakers can't reproduce the sound well. That's why you generally have 15" speakers in a bass cab and 12" speakers in a guitar cab. At the end of the day, an amplifier does just that - amplifies the sound it receives. I imagine you plug an active bass with very hot pickups into a high-volume amp, crank up the volume and play as hard as you can with an octaver set to to 2 octaves below, you would probably do some damage to the speakers or amp, but in reality, you wouldn't actually do this.

Besides, when mixing music for example, most setups I've seen tend to use 4" or 6" speakers, which are tiny compared to those in a bass cab, but they're meant to accurately represent the recorded sound. So if those don't get damaged from the frequencies they reproduce, I can't imagine speakers in a guitar cab will be damaged providing you're sensible with it (which goes for all equipment).

As a bassist of 40 years, having played through many hundreds of different amps, bass amps, guitar amps, keyboard amps, PA systems, up and down the line from a Pignose amp up to a 50,000 watt outdoor festival sound system, that no, categorically no, is it going to damage a guitar amp or guitar speaker to play bass through it, as long as you do not overreach the rated power handling of the speaker for extended periods.

The only speaker I've ever blown up was a JBL 18" in a folded horn cabinet, using a Crown DC300a amplifier all the way up, with an overdrive preamp at full gain. Glorious (but brief) noise!

Many bassists use (or used) Fender Princeton amps as practice amps for small spaces...and you cannot ever accuse a Princeton of being a bass amp. The Ampeg SVT, 300 watts of continuous power, runs into a cabinet with eight 10" speakers. A ten inch speaker that is "rated" as a guitar speaker, I might add.

Additionally, after having designed speakers for the last 10 years...the notion that a bass' notes or frequencies will "harm" a guitar amp are bordering on ridiculous. As our resident champion poster notes, it's entirely urban legend.

Coming from an electronics background, I'd say the danger of connecting a bass amp to the guitar speaker cabinet is that the amp assumes in its design that it can drive the speaker at very low frequencies, much lower than a typical guitar amp would. Typically, speakers are not designed to filter out too-low or too-high frequencies; the pre-amplification stage is supposed to take care of that. If you had a full-range amplifier, a passive crossover can split frequencies and send different components of the signal to voice coils with different ranges. Otherwise, a regular speaker could filter out the low-end component only if it had a huge heatsink on it to do so, and would need an additional big coil to better match the impedance of the low-end. Since the coil makes up a significant portion of the price of a speaker, it kind of beats the purpose; just build a bigger cone instead, or filter out the frequencies in pre-amplification stage. 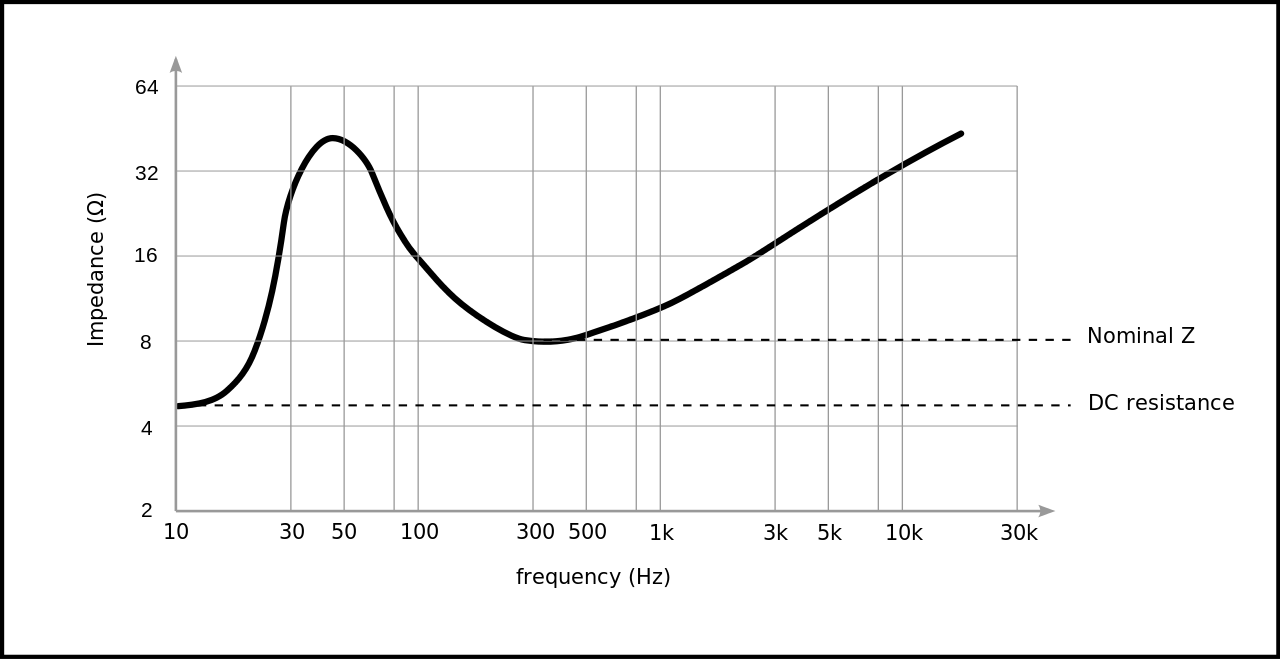 I am guessing that the normal operating range of that speaker is from about 100 Hz to 5kHz. It is visible in the graph that the impedance of the speaker increases when the signal gets lower, until a certain cutoff frequency (around 50Hz) where the impedance gets lower, due to the signal looking more and more like DC. Since the cone does not produce sound at such low frequencies, anything lower than this cutoff frequency produces significant amounts of heat.

Speaking of preamplification: since the guitar amp is usually matched to a guitar speaker, the amplifier will strip out unwanted components of the signal in pre-amplification stage to protect it. The extreme bass is cut out as it can be damaging to the speaker. Plugging in a bass should be ok, but you should take into consideration that the amp might assume low frequencies that are typically of the level of a guitar, not a bass, thus the filter might not cut out enough of the low part. YMMV. To remain safe, don't turn up the volume too much.

A speaker that is driven at too low a frequency will only dissipate that energy as heat, not sound, which can easily lead to overheating. It will also appear to the amp as having a much lower impedance when compared to the optimal range of the speaker. Most amplifiers have overload protection built into their design, but different levels of damage could still occur even with the protection in effect. Even so, overload protection is usually an all or nothing operation: it cuts off the output in its entirety if something is wrong, and may or may not restore it moments later, if the condition changes. It will not just strip away offending components of the signal, as this is a feature of speaker processor hardware (pre-amplification), and this kind of hardware either has a pre-programmed list of amp/speaker combinations, or you give it manual parameters that it will obey.

As an example, say your bass amp expects an 8 ohm load and you hook up your 8 ohm guitar speaker to it. So far so good, the numbers tell us that it will work, but since the 8 ohm specifications for your speaker apply only to its normal range of operation, its actual impedance at lower frequencies will likely be much lower, thus overloading your amplifier when you play your bass in it, since the bass amplifier will definitely not cut off lower frequencies, as opposed to a guitar amplifier that does it to protect the speaker.

Not the answer you're looking for? Browse other questions tagged guitar amplifiers speakers effects or ask your own question.

8
Using a bass guitar on a guitar amplifier through a bass pre-amplifier?

2
Using a looper live - how to connect playback and overdub to 2 different amps?
4
Tracking down hum in several amplifiers in a home studio
8
How to connect a line signal to a guitar amp?
2
Guitar rig: the switch from beginner to intermediate
5
My guitar has a problem - no signal to the amp. How can I fix it?
1
Choosing speaker resistance and power handling for a 1W amp head
1
Amp modeling on multi fx pedal through an amp
2
Matching of the impedance for the effect pedals
2
Modeling amp with FX Loop
0
Can I use my PC as a pedal with an external guitar amp?