I am studying Music at AS-level - we have to harmonise a soprano line (in any style we wish I believe) with the alto, tenor and bass parts.

One possible perfect cadence I have been taught is the Ic-V-I progression. However I found the following graphic on a revision site. The two rules below it (about the bass being doubled, and the octave leap) are not things I have been taught. Are they true?

(It's possible that you would follow these rules if you wanted to be in a certain style, but doing so is not necessary for the exam I'm taking.)

It seems like every theory program has a different name for this Ic construction. I admit I have never seen it called that, though I have seen a variety of other names, including I6/4, V6/4, and just plain not labeling the chord.

Because of the rules about downward resolution, the sixth and fourth above the bass may not be doubled in a four-part texture. To do otherwise would require parallel octaves in the resolution, which is (of course) forbidden in this style. Therefore, the bass must be doubled in the Ic sonority.

I have never heard nor seen the rule about the octave leap in the bass. If the Ic designation implies something beyond the designations with which I am more familiar, then perhaps it is a rule in that case, but I have seen many, many instances (at least in textbook examples) in which the bass simply stayed on the same pitch. I can imagine that such a rule would create difficulty in certain circumstances. Of course, the octave leap is permissible, provided that no other rules are broken.

In Bach's time, the cadential six-four chord was treated as an appoggiatura grouping; the root and third had to resolve downward and therefore were never doubled. This rule was followed by most composers of chorales for some time thereafter and thus is included in all introductory harmony texts.

By Mozart's time, the cadential six-four was established as an independent chord and one can find examples of root doublings and upward resolutions like the following: (Piano Sonata K. 333, I; key signature is B-flat major) 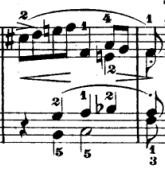 As to the rule that the bass must jump an octave, your reference is certainly wrong. Jumping down an octave is idiomatic in this situation (up an octave would be weird), but remaining on the same note is even more common. In fact, the normal range of the bass in choral music is only F-d', so if for instance you are in the key of A (major or minor), the octave leap is impossible since there is only one note E in the range.

Not the answer you're looking for? Browse other questions tagged chords harmony chord-progressions cadence or ask your own question.

1
Help harmonizing a piece
5
Is this a form of cadence?
1
Using passing notes in SATB writing
5
How to realize a figured bass
1
Constraints for doubling upper voices in 4-part harmony
4
How do I fix a last chord that has a doubled leading tone?
0
Why is there no full triad as the last chord in 4 part counterpoint?
3
Are certain 4 part writing rules contradictory?