What is the difference between vibrato and tremolo?

I was just wondering what are the real differences between tremolo and vibrato. Are those two different words for the same concept? Which one is used in opera singing? I searched to find the exact meaning but I still couldn't find the real meaning out of them.

Vibrato is pretty easy to define because there is one widely agreed-upon definition: a deliberate, regular, periodic change in pitch (like a controlled warble), generally much less than a semitone, sometimes as much as a quarter-tone or more up and down. Vibrato is commonly used as a performance technique by vocalists (including opera singers), players of string instruments, and guitarists, among others.

Vibrato is also available as an electonic effect commonly used for electronic keyboard instruments, electric guitars, and other electric, electronic, or electrified instruments.

Tremolo (1) (my numbering) is rapid repetition of a single note or repetition of two different notes that are usually separated by more than a whole step. Whole or half step separations would usually be considered a trill, but a sequence of tremolos might have whole or half step separations in some parts and still be notated and described as "tremolo". Tremolo (1) is most commonly used in bowed or plucked instruments.

This kind of tremolo is notated as follows:

I believe there may be cases of tremolo (1) involving more than two notes, but one and two note are the most common types.

Tremolo (2) is a rapid variation in volume, dynamics, or intensity. As far as I know, this is primarly done electronically for electric or electronic instruments. Electronic tremolo is available in electronic effect form, like vibrato, and also possible as a performance technique using the volume or level controls on some instruments. The electronic effect can also be applied to acoustic instruments or voice either during the mixing process of producing a recording, or as part of amplification of the instrument during a live show. This can be heard on Robert Plant's voice in "Hats Off to (Roy) Harper" by Led Zeppelin.

Tremolo (3) is also used to mean vibrato or a combination of vibrato and tremolo (2). This sense of tremolo also applies mainly to electric and electronic instruments, and it's possible that this usage of the word comes from the introduction of the "tremolo bridge" (which actually creates the above vibrato effect when used) on the Fender Stratocaster. The arm used to operate a "tremolo bridge" is famously called a "whammy bar". Sometimes a "tremolo bridge" is more properly called a "vibrato tailpiece".

An example of an electronic device that produces both a vibrato and tremolo (2) effect: 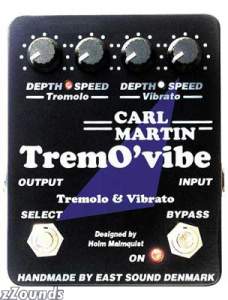 A Fender Stratocaster "tremolo bridge" that actually produces a vibrato sound when used: 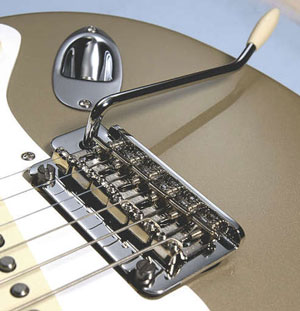 What is tremolo picking?

How does one sing with vibrato?

When to start Vibrato (on any instrument)

However, lots of instruments have things they call "tremolo" or "vibrato". There is also the non-instrument specific concept of "tremolo" as a rapidly repeated note or chord or alteration of notes or chords.

Instrument-specific executions may have separate names (like the "bellow shake" on an accordion). Quite usual is the execution for single-note tremoli by alternating between two to four fingers (like on piano or guitar).

For wind instruments and voice, what could be considered sort-of-tremolo is rather called "vibrato": a certain regular variation in loudness achieved by an elasticity in the breath control and (in the case of the voice) a relaxed throat and voicebox. The resulting slight variation of both pitch and volume is called just "vibrato".

For the accordion, "tremolo" is mainly used for a registration of two to three reeds which are deliberately slightly out of tune resulting in an undulating tone. The term "vibrato" instead is used for using the same kind of movement on the keyboard that a string player would use on the string. This does not actually result in any pitch variation (as the pitch of most free reed instruments is intentionally quite fixed) but in rather subtle pressure and consequently loudness variations via the bellows.

Indeed, such a "vibrato" will work even with an acoustic piano though considerably more subtly there.

So all in all, there is some overlap to how "tremolo" and "vibrato" are used, with tremolo used for pretty tangible changes in loudness (and usually with repetitive manual attacks of a note/chord except when talking about tremulating registers in accordion or organ or other wind instruments), with vibrato being reserved to slight periodic variations primarily (but not entirely so) of pitch.

Tremolo is the rapid reiteration of very short notes that for the guitar gives the illusion of sustain.

Vibrato is an effect on the guitar that is done by moving pulling the string up and down to move the pitch up to a full semitone.

Which is used in Opera singing?

Natural Vibrato is part of singing. It is done by the rapid alternation between two notes. Tremolo to me is a stringed instrument technique. I doubt singers who sustain basically for as long as they can hold their breath would have any use for it.

Not the answer you're looking for? Browse other questions tagged voice vibrato tremolo or ask your own question.

8
What is tremolo picking?
4
When to start Vibrato (on any instrument)
7
How does one sing with vibrato?

5
Joik - traditional Sami songs from northern Sweden and Finland
3
Can anybody develop their falsetto like Brian Mcknight?
3
string vibrato: before/during/after beginning of sound production?
6
What is the technology where two vocals overlap simultaneously in songs?
2
Vocal (singing) ranges - surprisingly small differences!
1
Help with (what it looks like) vibrato
2
The role of vocal vibrato in a world where volume and large theatres are not a problem
2
what are the hand-signs in solfege?
5
What is it called when one voice type sings a 'solo'?
6
Why do singers use vibrato and not tremolo in their voices?